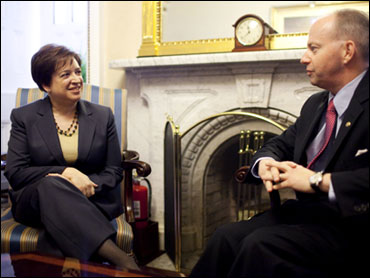 From her office just behind the Supreme Court, Carrie Severino of the conservative Judicial Crisis Network watched the money come in waves. It spiked when Supreme Court Justice John Paul Stevens announced he would retire, when President Barack Obama nominated Elena Kagan to succeed him, and when Kagan started making news on Capitol Hill.

Across the ideological spectrum, Kagan's confirmation is a ripe opportunity for groups to push their agendas, mobilize their supporters and raise money. The organizations are pumping up the volume in the debate, knowing that their influence is measured largely by the intensity of their support or opposition.

"Ensure Elena Kagan gets a fair hearing," blares a headline on the website of NARAL Pro-Choice America. "The future of women's access to abortion hangs in the balance," the group tells visitors to the site, asking them to urge senators to inquire about Kagan's stance on the Roe v. Wade decision that established abortion rights.

While they're at it, visitors are asked to give their names, mailing and e-mail addresses and their cell phone numbers, which NARAL says it will use to send "urgent" text messages.

The Judicial Crisis Network has similarly ominous warnings about what might happen if Kagan is confirmed. Its leaders are using the Internet and social networking to get the word out to conservatives about what it calls Kagan's "extreme left wing views."

In an e-mailed newsletter Wednesday, the anti-abortion rights group Americans United for Life invited people to join its "Stop Kagan" Facebook page and donate as much as $2,500 to the group.

Kagan is on a constitutionality of Obama's recently enacted health overhaul are high priorities for core supporters on both sides of the political divide.

And liberal and conservative interest groups spend freely to influence elections. Severino's group, then called the Judicial Confirmation Network, shelled out more than a half-million dollars a month before Election Day in 2008 for TV ads that linked Obama to shady characters and questioned who he would choose for the Supreme Court.

This time around, the Network is sifting through recently unearthed documents about Kagan's past with an eye toward making a vote to confirm her a difficult one for Democrats in conservative-leaning states.

"They've got a big decision to make," Marx said. "Do they want to hitch their wagon to an increasingly unpopular Barack Obama and his judicial nominee ... who is clearly going to be a rubber stamp for his agenda?"

The liberal People for the American Way spent more than $70,000 just before the 2008 elections for ads attacking moderate Republicans who voted for Chief Justice John Roberts and Justice Samuel Alito, which the group called "extreme Bush judges."

This year, the group is working to defend Kagan from conservative criticism and trumpet its message that the Supreme Court under Chief Justice John Roberts has favored corporations and powerful interests over individual rights.

"The Roberts court is giving us ammunition ... and having a nomination process brings more attention to it," said Marge Baker, the group's executive vice president. "Voters get that when they're voting on senators, they're voting on people who will be voting to confirm or not confirm Supreme Court justices, so it could well be an issue in the election. I hope it is."

Interest groups have to walk a tricky line when weighing in on Supreme Court nominees, seizing whatever opportunities they have to activate their supporters while trying not to spark blowback that could hurt their cause, said David Yalof, a University of Connecticut law professor who has studied the confirmation process.

The organizations "are looking for an opportunity to excite their base and basically to earn their paychecks by making the good fight," Yalof said. "But they don't want to invite a backlash, so they have to read the tea leaves very carefully."

The National Rifle Association, for example, made a tough call last year to wade into the Supreme Court fray, warning lawmakers it would count a "yes" vote for Obama's first nominee Justice Sonia Sotomayor against them in its closely watched political scoring system. Then its leaders watched as its top-rated Democrats and a few highly rated Republicans backed her anyway.

The NRA is waiting until after Kagan's hearings to decide whether to activate its members this time, said spokesman Andrew Arulanandam.

"We have serious concerns. We will work with (senators) to make sure that her position on the Second Amendment" right to bear arms "and on other issues that are important to us are asked" about, Arulanandam said. "There's nothing to mobilize right now."