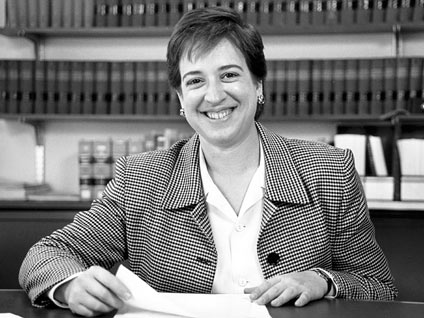 While working as a domestic policy adviser to President Clinton, Elena Kagan emphatically agreed with a proposal to strongly defend affirmative action in the Supreme Court, while at the same time siding with a white teacher who was laid off instead of a black colleague solely because of her race.

"I think this is exactly the right position--as a legal matter, as a policy matter, and as a political matter," Kagan wrote by hand in the margin of a memo from then-Solicitor General Walter Dellinger about the controversial case, Piscataway Board of Education v. Taxman.

That posture -- strategic and careful -- is reflected throughout the 46,500 pages of documents contained in the Clinton Library and released on Friday. The documents represent about a third of the Kagan documents stored in the Library and cover her time as a deputy domestic policy adviser to President Clinton from 1997-1999.

In that role, she focused on issues ranging from tobacco negotiations and criminal law to abortion and gay rights, and she helped strategize on how best to further the President's policy agenda. Some of the documents, for example, reflect attempts to head off conservative efforts to pass a broad ban on so-called "partial-birth abortion" or to curtail abortions by minors without parental consent.

When Congress passed the partial-birth abortion ban without a narrow exception to protect a woman's health, for example, she helped defend President Clinton's veto. In the files are letters from Clinton to various religious leaders, explaining why he vetoed the ban.

And when Congress was poised to pass a law making it a crime to take minors across state lines for abortions without parental consent, she worked to find political solutions to oppose it -- such as getting statistics on how many grandmothers cared for teenagers and could technically be sent to jail under the law.

But most of the documents thus far reveal little about Kagan's personal views--and the White House has stressed they were written in her role as a policy adviser. Many are memos written to her by other members of the President's staff. Others are simply press clippings.

The affirmative action case is one of the rare instances where Kagan says what she thinks -- and it's all but certain to provoke questions about her views on racial preferences in hiring and firing.

That means Kagan's confirmation hearings, assumed just days ago to be devoid of many fireworks, will instead focus on yet another controversial social issue. This morning, Sen. Jeff Sessions, the top Republican on the Judiciary Committee, said he found many of her memos as a law clerk for Justice Thurgood Marshall "troubling."

Those memos, which I reported last night, show her taking a liberal position on contentious social issues like abortion, criminal rights and gun rights -- and will give Republicans ammunition to mount a fight against her.

With the release of today's papers, now add to those contentious issues yet another one: affirmative action.

The case was poised to be one of the biggest affirmative action rulings in years: The Supreme Court had agreed to decide whether the Piscataway, New Jersey school board had discriminated against a white teacher when it fired her over of an equally qualified black teacher--solely because she was white.

The case was contentious from the beginning. The Bush Administration sued the school board, arguing it violated the white teacher's civil rights when it took her race into account. Lower courts agreed. But then Bill Clinton was elected president, and his administration tried to switch sides in the midst of the controversy and defend the school board.

When the case finally reached the Supreme Court, the Clinton Administration was faced with a dilemma. It wanted to defend the school board--and affirmative action--but it recognized it would probably lose in the conservative-leaning court. That "would be a disaster for civil rights in employment, rendering unlawful even the most carefully designed non-remedial affirmative action plans," wrote then-Solicitor General Walter Dellinger.

The Clinton Administration also concluded the school board didn't offer enough evidence to fire the white teacher in the first place.

Its solution: file a narrow, carefully-crafted brief siding with the white teacher on very narrow grounds that the board didn't defend its firing decision--which would allow the Court to dodge the broader question on affirmative action.

Ultimately, the school board used money from civil rights groups--fearful they would lose in the Supreme Court--to settle the case.

Kagan also directly expressed her views on a proposed federal law banning assisted suicide, calling it a "fairly terrible idea." That proposal came after the Justice Department took the position that federal drug laws did not trump an Oregon law allowing physician-assisted suicide. The Supreme Court ultimately agreed and upheld the Oregon law.