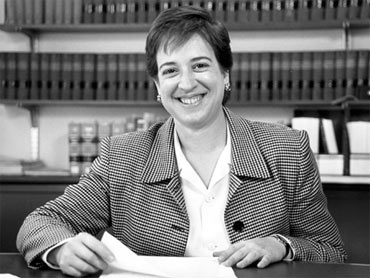 Elena Kagan has kept her cards so close to the vest that in the days after President Obama nominated her to the Supreme Court, some on the left worried she was too moderate to replace liberal Justice John Paul Stevens.

But in documents obtained by CBS News, Kagan--while working as a law clerk to the late Justice Thurgood Marshall - made her positions clear on some of the nation's most contentious social issues.

The documents, buried in Marshall's papers in the Library of Congress, show Kagan standing shoulder-to-shoulder with the liberal left, at a time when the Rehnquist Supreme Court was moving to the conservative right.

They also provide a remarkably candid picture of her opinions, including on the most controversial issue Supreme Court nominees ever confront: abortion.

Although Kagan's confirmation has thus far been an all but foregone conclusion, sources say these documents will give Republicans a few cards of their own to mount a strong fight against her.

And they will only heighten demands for more information on her views--including interest in her papers in the Clinton Library. Some of the Clinton Library documents, which cover her time working in that administration, could be released as early as Friday.

The Marshall documents are legal memos summarizing cases the Court had been asked to consider. They cover the spectrum of hot-button social issues: abortion, civil rights, gun rights, prisoners' rights and the constitutional underpinnings for recognizing gay marriage.

On abortion, Kagan wrote a memo in a case involving a prisoner who wanted the state to pay for her to have the procedure. Kagan expressed concern to Marshall that the conservative-leaning Court would use the case to rule against the woman--and possibly undo precedents protecting a woman's right to abortion.

"This case is likely to become the vehicle that this court uses to create some very bad law on abortion and/or prisoners' rights," she wrote in the 1988 memo.

She also expressed strong liberal views in a desegregation case. Summarizing a challenge to a voluntary school desegregation program, Kagan called the program "amazingly sensible." She told Marshall that state court decisions that upheld the plan recognized the "good sense and fair-mindedness" of local efforts.

"Let's hope this Court takes note of the same," she wrote in the 1987 memo. Just three years ago, the Supreme Court struck down a nearly identical plan.

Kagan also wrote a memo that senators could use to question whether she believes there is a constitutional right to gay marriage.

That memo summarized a 1988 case involving a prisoner serving a life sentence in New York. He argued the state of New York was required to recognize his marriage-by-proxy in Kansas - even though such marriages were illegal in New York.

The basis of his argument was that New York had a duty under the Constitution's Full Faith and Credit Clause to recognize his Kansas the marriage as valid. Kagan told Marshall his position was "at least arguably correct," and recommended asking for a response from New York officials.

Taken together, these documents are certain to provoke considerably more questions than the less controversial papers unearthed before her confirmation hearings for solicitor general.

In those 2009 hearings, she explained she was merely trying to reflect Marshall's views when she wrote memos to him.

"I was a 27-year-old pipsqueak, and I was working for an 80-year-old giant in the law, and a person who, let us be frank, had very strong jurisprudential and legal views," Kagan testified.

(at left, watch Crawford's report on the Kagan documents on the CBS Evening News)

But these memos, often written in the first-person, show a more personal approach that suggests she shared many of Marshall's opinions.

In a case involving prisoners' rights, for example, Kagan criticized a 1984 Supreme Court decision--Strickland v. Washington - which set tough new standards for convicted criminals to argue they were denied effective assistance of counsel. Marshall and another liberal icon, Justice William Brennan, were the only dissenters in that case, written by Justice Sandra Day O'Connor.

"I'd like to reverse Strickland too," Kagan wrote in her memo to Marshall three years later, "but something tells me this court won't buy the idea."

Update June 4: Here are the documents from the Marshall papers (all in PDF format):