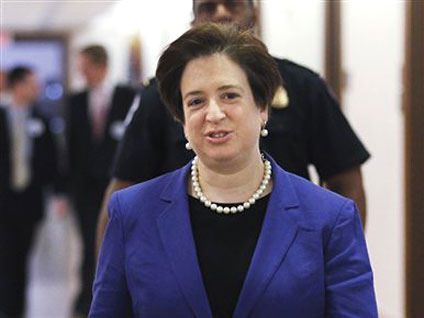 Sen. Jeff Sessions, the top Republican on the Senate Judiciary Committee, has responded this morning to our report last night on Elena Kagan's legal memos while she was a law clerk to Justice Thurgood Marshall.

Sessions called the documents "troubling" and said they "have to be carefully examined" as part of her confirmation hearings.

The remarkably candid documents provide some insight on her approach in a number of controversial social issues, from abortion to gun rights. Kagan has previously kept her views close, so liberals are certain to be encouraged by the memos, which indicate she may not be the moderate some had characterized her to be.

But as Sessions' comments reflect, Republicans now have ammunition to use in the fight against her--and appear ready to use it.

"The newly unearthed memos reveal not only Ms. Kagan's strong liberal views, but a willingness to bring those views into the courthouse - shaping and even replacing legal judgment," Sessions said. "From issues such as guns to abortion to crime control, Kagan's memos unambiguously express a leftist philosophy and an approach to the law that seems more concerned with achieving a desired social result than fairly following the constitution."

Sessions said it is "now doubly important" that the White House produce documents from the Clinton Library from her time in that administration.

Some of those Clinton Library documents are expected to be released later today, and we'll get those up as soon as we have them.

And here are the documents we reported last night from the Marshall papers (all in PDF format):