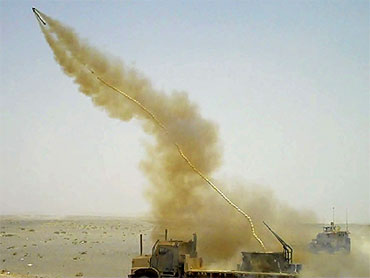 There's something about deserts. Empty, sun-baked wastelands of sand and rock with little apparent use - and yet, for millennia, men have been fighting wars over them.

One night this week we were camped out in the desert in southern Garmsir, about one mile east of the market town of Safar Bazaar, a Taliban stronghold that the Marines of 3/1 have now begun to clear. It was the evening of the first day of the assault, and despite a lot of explosions, some gunfire and a few close calls, there had been no casualties.

We were camped out around the armored vehicles positioned in a wide circle. 250 yards to our south was the twisted remains of a mine-clearing rig that had been blown up by an IED earlier that day - fortunately nobody in the vehicle that it was attached to was hurt. About half a mile to our east another IED had been found, but the explosives disposal teams had been so busy that day they hadn't got to it yet. Nobody walked out in that direction.

From a small ridgeline, we could look down on the town of Safar Bazaar with binoculars as the sun went down - the explosions and gunfire had stopped and it looked peaceful in the evening light, with palm trees, mud-brick compounds and a low hill to the west. After dark, we lay out under the clear sky, the Milky Way arching right over us, barely a sound to be heard except the occasional burst of a radio message as some unit reported in. War is always ugly, anywhere. But the desert that night was beautiful.

The attack started at 3.30 that morning, when a platoon from Kilo Company was dropped in by helicopter under cover of darkness, close to the hill to the west of the town. Their mission was to occupy the hill with snipers and some heavy weapons to provide cover for the main force from Lima Company who would be coming in from the desert to the east at first light.

The Taliban knew for some time the Marines would be coming, and they'd planted IEDs along all the likely access routes.

To make the initial breach from the desert into the town, the Marines brought along the 4th Combat Engineering Battalion with a pretty impressive weapon - the MICLIC, which stands for Mine Clearance Line Charge. (photo above shows launch of a MICLIC)

The MICLIC is essentially a 100 meter-long flexible tube containing 1,750 pounds of C4 explosive (ie, a helluva bang) that is shot out of a tub with a rocket and deposited in a straight line along the ground. When it is detonated it is designed to clear a "breaching lane" of any mines or IEDs directly underneath it, providing a path through a minefield for advancing Marines.

The man in charge of the MICLICs, Major John French, was famous for his upbeat briefings on the MICLIC capabilities, which he promised on multiple occasions during the planning sessions would function "flawlessly". A mischievous grin on his face, however, belied the fact that, during training sessions, on average MICLICs fail between 60 and 70 percent of the time.

French, from Verona, Virginia, clearly enjoys blowing things up. The MICLICS are so powerful that they cannot be used in areas where people live -- but what better place to let off 1,750 pounds of explosive than the desert? So, at the end of that first day, Maj. French and his men (the truck that actually launches the rocket has the radio call sign "Reaper") had set off all five MICLICs they had attempted, "flawlessly," of course.

By day four of the assault, he had set off 16, all of which exploded, setting new records for the weapon, surprising everyone (doubtless including himself) -- and clearing more IEDs than they were able to count.

War is always ugly, anywhere. But there is something about deserts. Even after being shaken by multiple explosions, nothing much seemed to have changed, except for some blackened sand. From a distance, that first evening, the desert still looked beautiful.

A Day in the Life: Wardak, Afghanistan

Preaching to the Corps

Bedtime Stories From Marines to Children Back Home