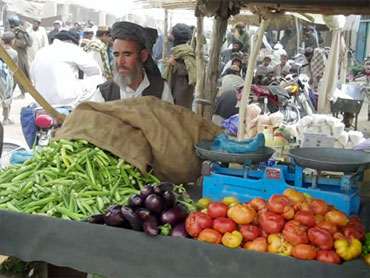 There is nothing like the taste of a fresh mango - particularly if you have been eating endless MRE's - the "Meals Ready to Eat."

These military rations are all vacuum-sealed in plastic with "nutrient levels adapted for operational requirements," and designed to last longer than most vintages of Bordeaux.  They all taste like Spam - even the desserts.  Never in the history of mankind have so many men and women eaten so much for so long that tastes of so little.

But back to the mangoes. We found them as we were walking through Lakari Bazaar, a large market on the edge of the eastern desert in Garmsir with a group of Marines from Third Battalion, First Marines' (3/1) India Company, led by Lt. Joe Moeller, from Bisalia, California.

The bazaar stretches for about half a mile and has about 250 stall owners. Moeller and one of his sergeants, Derek Clayton, from Tom's River, New Jersey, seem to know pretty much all of the store owners, greeting many by name.

The Marines patrol here every day, trying to make sure the Taliban who used to control the market until the beginning of this year don't come back. Sometimes they still sneak back, planting IEDs or intimidating locals with night letters and other threats. A motorcycle packed with explosives and ball bearings was detonated here last month, injuring three Afghans, and Moeller's men had to work hard to win back the locals' trust afterwards. On July 4th they found another IED, buried at one end of the market - an observant Marine saw some wires poking up from the sand. They did a controlled detonation that day - "the best July 4th fireworks I ever saw," says Clayton.

The bazaar attracts people from miles around, particularly on market day, which is Friday. The Kuchi nomads bring in sheep and goats and some camels from the desert.  Traders sell cookies and crackers, candies from Pakistan, motorbikes, plastic shoes, bolts of colorful fabric, knives, ground tobacco. There are butchers, bread makers and sellers of flashlights.  Iron-workers make doorframes that are all painted light blue or turquoise, while carpenters make furniture to order. One old man sat in front of a pan of hot oil, deep-frying slices of potato dipped in batter and then sprinkled with salt - he refused our money and insisted we taste his fare for free. They were so good the Marines later bought 2 kilograms worth.

Protecting this bazaar, in addition to the Marines, whose base is right next to it, are some locally-hired Afghan policemen, who have police uniforms but have yet to go to the police academy. They get just $130 a month - about half what a trained policeman receives - and are all meant to go to the academy at some stage. But for the time being, they act as eyes and ears around the bazaar, since as local men they know everyone - and if there is someone they don't know, they are immediately suspicious. These local police forces are controversial at a national level - some in the central government fear they could morph into militias outside the government's control. But for the time being with almost no central government control around Lakari Bazaar anyway, the men perform a useful function.

As security improves in and around the bazaar, more traders come, from further afield, to sell their wares - including one store run by two young men who sold all manner of sweet cookies, cold sodas (it is a favorite stopping place for the Marines in the heat of summer) and, among the watermelons, tomatoes and onions, a small pile of mangoes, fully ripe and only slightly bruised after the long truck ride from Pakistan to the south.

As a lover of mangoes - and incredulous at my find in such a remote place, I bought two for 60 Pakistani rupees - about 80 cents in U.S. dollars.   The traders prefer the rupees to Afghanis - the national currency that they think is too unstable.

I ate the sweet, yellow, perfumed flesh of the fruit with much pleasure, delirious to have an alternative to MREs.  I'm thankful that someone is brave enough to truck mangoes from the Pakistan border up through the desert, much of it still controlled by the Taliban, all the way to Lakari Bazaar - one of the most colorful, surprising, bizarre bazaars that I have had the pleasure of visiting.