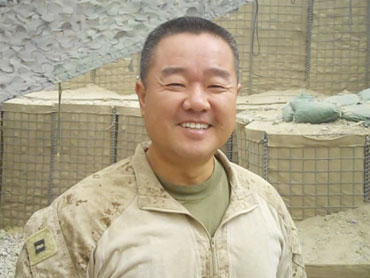 For the Buddha it was the bodhi tree; for the Pope - the balcony overlooking St Peter's Square; for Moses it was the mountain. Lieutenant Louis Lee, chaplain for the "Thundering Third," Third Battalion, First Marines, has a slightly different backdrop in mind for dispensing spiritual guidance.

"Imagine preaching on the deck of an aircraft carrier - what can beat that?"

Lt. Lee is a cheerful but humble man who wouldn't think of comparing himself to a major religious leader, but he does like to dream big. And in the entire U.S. military it doesn't get much bigger that an aircraft carrier - which can have 6,000 or more personnel on board.

At the moment, Lee has the 1,200 Marines attached to 3/1 to care for, and that is already a big responsibility. He preaches at non-denominational services, gives individual counseling to those Marines who seek him out, and he is also the person they turn to when the worst happens. The battalion has lost 10 men since it arrived in Afghanistan late April, and Lee has presided over memorial services for each fallen Marine. He dreads it every time.

Corporal Larry Harris was killed on July 1st as he carried a wounded fellow Marine - under enemy fire - to an open space where he could be evacuated by helicopter. On the way Harris stepped on an IED - he took the brunt of the blast, the Marine he was carrying, Lance Corporal Henry, survived. At the memorial service for Cpl Harris, Lt. Lee asked rhetorically "Why did this death happen?" He paused, and then said: "This memorial will not supply you with an answer as to why Cpl. Harris died in the line of fire."

This is the hardest part of Lee's job. The memorial services are quiet and solemn occasions, but the Marines are still in a war zone, and need to switch back to work-mode quickly. The residue stays with Lee - he has trained with these men, feels each loss as keenly as everyone else - and it is his job to oversee the grieving. He is the only man in the battalion who doesn't carry a weapon of any kind. Each death wears him down a little more, and at one point he had to take a couple of days to himself to meditate and pray and regain his composure, and his normal smiling, reassuring self.

Born in Korea, Lee and his family emigrated to Ecuador when he was 10. They lived there for four years as his father ran a restaurant business, then they moved to North Carolina.  English is Lee's third language, after Korean and Spanish. After college he got a job as a quality control engineer, making his parents very proud. "You know, a great job, the immigrant's dream."

But after a year and a half, Lee realized this wasn't for him, resigned and signed up for the seminary. His parents were horrified. But he persisted through four years of study, then worked as a pastor for 7 years before he met a Navy chaplain by chance at a conference, who ultimately persuaded him to sign up as a chaplain for the Navy. (The Navy provides all the chaplains - and the medics - for the Marine Corps). The possibility of delivering a sermon on the flight deck of an aircraft carrier was a definite plus in his eyes. It took his wife a while to feel comfortable with the idea of her husband joining the military and going on extended deployments, but finally she came around, and so he signed up. He has never regretted it. He is not a huge admirer of military rations, which taste notably bland to him, so his wife sends him packets of Korean food which he prepares for himself and anyone else who wants to share in his tent - provided they like it spicy.

As the deployment grinds on, more and more Marines come to Lee to talk. "They are young men, they are trained to be confident and strong. But they have to deal with fear too - they will never ever show it to an outsider, but they have to deal with it." He describes holding the hand of one Marine who was injured and trembling after being caught in a Taliban ambush, and after a short time seeing the man calm down. "It wasn't what I did - it was me bringing the peace of God to him," says Lee. "It is on those moments that I love this job the most."

Lt. Lee - soon to be Lieutenant Commander Lee (the Navy rank equivalent to a Major in the Marines) has yet to preach on an aircraft carrier - but he is determined to do so at least once during his career. He does have a t-shirt with a picture of an aircraft carrier - and a caption, which reads "Preach on this!"

Bedtime Stories From Marines to Children Back Home