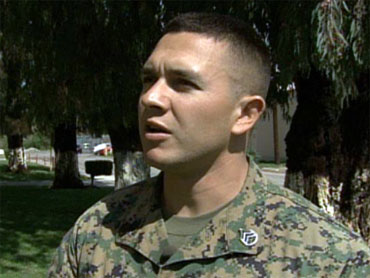 Staff Sergeant Nathaniel Dreyer (left) has been to war before.

In 2003 he was part of the initial invasion force that went up from Kuwait into Iraq. But for most of the Marines under him, this is their first deployment - and that is a challenge for Dreyer, who has been in the Marine Corps since 2000.

"Typically i won't hold any punches," says Dreyer, who is from San Antonio, Texas. "I'll tell them what to expect when we get there, I think it mentally prepares them for it."

But Dreyer knows that whatever nerves his Marines may have going to war, the real stress is on the home front.

"They're married, they're leaving their family, there's steps that we take to make sure that the family's taken care of not only financially but mentally, they have contacts if they get stressed out they can call," he said.

"There's gonna be times where you're not going to be able to talk to your family for weeks on end, you need to make sure your family's prepared for that."

Since January, CBS News has been following Dreyer and many of his comrades from the 3rd battalion of the 1st Marine Division - "Three One" as they call themselves.

We have watched them training in the desert at Twentynine Palms, east of Los Angeles, and sat with them in Afghan cultural awareness classes at their home base of Camp Pendleton near San Diego. We have met some of their families, listened to their stories, shared meals.

Now, we have followed them to Helmand province in southern Afghanistan as they arrive for a 7 month deployment - part of President Obama's surge of 30,000 U.S. troops this year aimed at winning back momentum in the war against the Taliban.

We will be spending a lot more time with Three One in the coming months, getting to know individual Marines as they come to terms with their slice of the war. And we will stay in touch with some of their families back home - after 9 years of this war, it is getting increasingly tough on the home front.

Dreyer's wife, Becky, gave birth to their baby daughter Macy in January. Just four months old now, Macy will probably be close to walking by the time he gets home at the end of his tour. Dreyer is stoical about that on the outside... But his wife knows how tough it really is for him. "She is his angel," she says. "He wants to protect her."

Staff Sergeant Nathaniel Dreyer has been to war before. But this is the first time he has to leave a four month old baby behind. That is a tough challenge - even for a Marine.