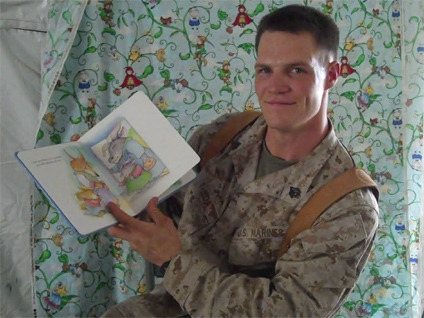 Never did the children's books "Brown Bear, Brown Bear," "I Love You Because You're You," and "Goodnight My Duckling" sound so heartfelt as when they were read this afternoon by Sergeant Chase Sheda at 3/1's headquarters, Forward Operating Base Delhi.

Sergeant Sheda was reading the books out loud while looking into the lens of a small video camera, a little nervously at first, but more fluidly once he got used to looking into a camera and not at his children — Chase (who is 4) and Jayden (who is 3).

Sheda lives in Temecula, Calif., and has been in the Marines for 9 years.

This is his second deployment since his children were born.

The video was burned onto a DVD by RP2 FMF Andrew Lovick, who is the assistant to the battalion's chaplain, Lt. Louis Lee, and then put in the mail for Sheda's wife Bobbi to show to their children at night before they go to bed.

It is not like sitting on the side of a child's bed and reading a story out loud, but it seems to be a big hit with the children who have benefited from the program, called "United Through Reading," which begun in 1989.

There are three components - one for the military separated from children by deployments; one for parents separated from their children by incarceration or drug treatment programs; and one for grandparents living away from grandchildren. It is all funded privately, and the program brochure claims to have helped 412,000 people over its history.

Home is a long way away during a seven-month deployment, particularly for those who are married with children. The Marines rely heavily on satellite phone calls and the Internet when it is available; most of the larger bases have an Internet tent with computers they can use for 30 minutes at a time, and there are satellite phones they can use for a subsidized charge.

But then there is the dreaded "River City" - the name given to a lockdown on all Internet and phone usage when there is a casualty or when a major operation is about to start.

The idea is to stop sensitive information from leaking out - but it is a particularly hard time for the families back home. The Marines might not be able to call out, but at least they know the reason for the lockdown. The families just hear nothing and don't know why - it makes for agonizing waits.

Those on the homefront react in different ways: Some worry all the time, others try to shove it out of their minds, with varying degrees of success.

Nicole Morse, the wife of Sergeant Jim Morse from Weapons Company, told us that "I give myself a set period of time to think about what he might be going through, and then I just get on with what I have to do that day."