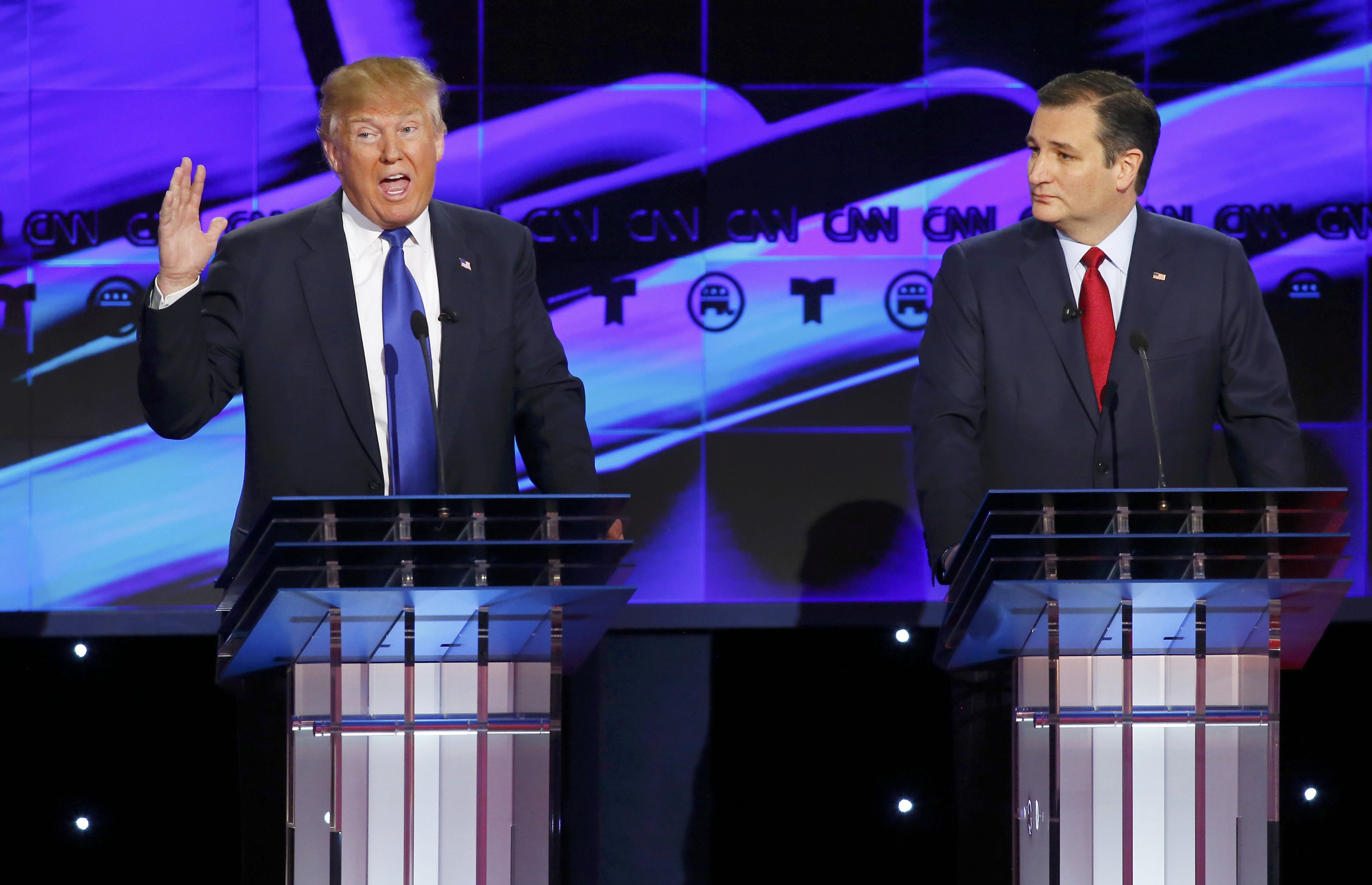 10:49 p.m. Closing statements. Carson says there was a movie about his hands made and that they've saved many lives. Kasich said a recent poll showed him beating Hillary Clinton in a general election. Rubio asks voters to support him to bring an end to "this silliness, this looniness." Cruz says he has consistently stood up to both parties in Washington and would rescind every executive order President Obama has signed. Trump says no one knows politicians better than he does.

10:38 p.m. The candidates are asked about the ongoing dispute between Apple and FBI over the a court order requiring Apple to unlock one of the San Bernardino attacker's phones.

Kasich went after President Obama for a leadership failure in the dispute. The Ohio governor said this dispute shouldn't be litigated "on the frontpage of The New York Times." He advised the president to hold a negotiation between the parties and "lock the door and say you're not coming out" until you reach an agreement.

10:23 p.m. Trump is asked about the ceasefire that is about to take effect in Syria.

"I really don't because it's not working," he says. "It's a meaningless ceasefire."

He also said the U.S. would be so much better off if the late Libyan leader Muhammad Gaddafi was still in power.

10:21 p.m Kasich says he would look for opportunities to remove the North Korea leader as president, but doesn't answer a question about whether he would risk war over the nation.

Carson is also asked about North Korea, but said he needed to whine about the fact that he hasn't been asking questions like the other candidates.

10:10 p.m. Trump is asked about his recently remarks about being neutral in the Israeli-Palestinian conflict. Asked how he would remain neutral when the U.S. considers Israel its closest ally, Trump said, "I don't think they do under President Obama because I think he's treated Israel horribly."

Trump says he has "very close ties to Israel" and is "very pro-Israel," but warns that it "doesn't do any good to start demeaning the [Palestinian] neighbors." He said he wants to finally negotiate peace between the two sides.

Rubio: "He thinks the Palestinians are a real estate deal."

9:56 p.m. Romney on Wednesday called on Trump to release his tax returns, and said there is "good reason to believe there is a bombshell in them." Asked if it's true, Trump said, "You don't learn anything about somebody's wealth from tax returns."

Trump said Romney "looked like a fool" when he delayed releasing his returns in the last presidential election until he filed them in September 2012, about a month before the election.

"I will absolutely give my returns," Trump said, but added he can't release them because he's currently being audited.

He said he would "get rid of the Department of Education," bring back environmental protection to the states. He vowed to "cut many of the agencies" and balance the federal budget.

9:38 p.m. Candidates have been debating Obamacare and Trump has said he would repeal the healthcare law. Trump said the government should have "gotten rid of the lines" around the states for insurance coverage.

Rubio then went after Trump asking where his Obamacare replacement plan is. Trump repeated his line about the lines around the states.

"Now he's repeating himself," Rubio shot back, referring to a recent debate when the Florida senator was criticized for repeating the same line several times.

9:25 p.m. Trump is asked if he would use religious liberty as a litmus test in the nomination selection process for open seats on the Supreme Court and other lower courts.

"Yes I would, and I've been there very strongly," says Trump, who went on to attack Cruz.

"[Chief] Justice [John] Roberts was strongly recommended and pushed by Ted," he says. "He gave us Obamacare...the judge has been a disaster."

9:19 p.m. Trump addresses polls that showed unfavorable views of him among Hispanic voters, including a survey from Telemundo.

"First of all, I don't believe anything Telemundo says," he says, adding that he has performed very well among Hispanic voters in the nominating contests so far.

9:14 p.m. Rubio said the GOP is the "party of diversity" since he and Ted Cruz are both Cuban Americans, and noted that Ben Carson is an African-American on stage.

9:08 p.m. Rubio is asked to address his flip-flip on the 2012 immigration program known as DACA. While he previously said that it would be deeply disruptive to deport them immediately, he said, "The problem with the executive order is it's unconstitutional."

"I will cancel it on my first day in office," says Rubio, who then had another terse exchange with Trump and said, "I guess there's a statute of limitations on lies."

9:03 p.m. In an interview published Thursday, former Mexican President Vicente Fox told Fusion's Jorge Ramos said "I'm not going to pay for that f***ing wall" on the U.S. border with Mexico. Asked how he would still make Mexico still pay for the wall, Trump said, "I will and the wall just got 10 feet taller."

Trump criticized Fox for using a "filthy, disgusting word" and added "we're going to make them pay for that wall."

Rubio said that if the wall is built anything like Trump Tower, he would use "illegal immigrant labor to do it."

8:55 p.m. Cruz is asked what would happen to children of parents who came into the U.S. illegally who would be deported under his proposed policy. The Texas senator says that he would follow existing law, but seems to dodge the question. Then, he attacked Trump.

"He was firing Dennis Rodman on Celebrity Apprentice," Cruz says when he was trying to secure the border, adding that Trump funded the "Gang of Eight" because he gave over $50,000 to three Democrats and two Republicans.

Trump points out that Cruz has received no endorsements from his fellow senators.

"You should be ashamed of yourself," Trump said.

8:48 p.m. Moderator Wolf Blitzer tells Trump that Cruz now says the biggest difference between them is that they would both deport the 11 million undocumented people in the U.S., but that Cruz would not allow them to come back into the country.

"They will go out...some will come back...the best," Trump said. "They have to come back legally, through a process."

Cruz said he's against forgiving people who broke the law by coming into the U.S. illegally.

Rubio says the U.S. must secure the border first and then "we'll see what the American people are willing to support." Rubio then goes after Trump who reportedly has hired a significant number of foreign workers.

And then Trump goes after 2012 GOP presidential nominee Mitt Romney: "He ran a terrible campaign. That's an election that should have been won."

8:43 p.m. After an especially long commercial break, candidates introduced themselves.

8:30 p.m. The five remaining Republican presidential candidates, in what was originally a field of 17 contenders, are about to face off in the final debate before Super Tuesday next week.

The debate comes only two days after Donald Trump's victory at Nevada's GOP caucuses, which comes on top of his wins in South Carolina and New Hampshire.

This could be a make-or-break debate as Trump's top rivals, Ted Cruz and Marco Rubio, will attempt to stand out and stand up to the frontrunner at the debate and knock him off the path to the nomination.