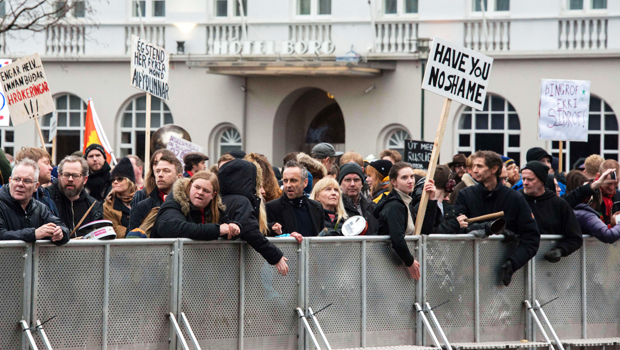 The crash of 2008 put the economies of many nations ON ICE. But few took a harder hit than Iceland. Years later, politicians and bankers are still paying the price, as Martha Teichner reports in our Cover Story:

In Iceland, a volcanic eruption of the political kind: angry protestors demanded the resignation of their prime minister, when last week's sensational data leak revealed his millions of dollars of undisclosed holdings in Iceland's three biggest banks, which collapsed during the world financial meltdown in 2008.

This past Tuesday, Prime Minister Sigmundur David Gunnlaugsson stepped aside.

Iceland is known for its volcanic eruptions, among its many exotic natural wonders -- and now for something else: after the crash, it let its banks fail, and put its bankers in jail.

Historian Magnus Sveinn Helgason conducts walking tours during which he explains what went wrong when Iceland's bankers and businessmen set out to turn their country of only 330,000 people into a world financial capital:

"When the three big Iceland banks collapsed, all three would have ranked among the ten largest bankruptcies in U.S. history had they been U.S. companies," he said.

"These guys, they stylized themselves as corporate Vikings," Helgason said, "sort of laying claim to the mantle of the original Vikings that settled Iceland."

The banks borrowed massive sums of foreign money, then loaned it out at much higher rates to entrepreneurs who -- like the ancient Vikings -- plundered, buying up companies worldwide. Money rolled in, and a nation of fishermen began believing in the so-called Icelandic Miracle.

"A lot of people seemed to be getting very rich, very fast, and a lot of people wanted to join in on that," said Katrin Jakobsdottir. She is one of the members of Parliament who decided on Iceland's hardline response when this whole house of cards built on debt came tumbling down.

"Even though the banks also were responsible, as a whole, I think it was the conviction that also the individuals within the banks had done this," Jakobsdottir said.

There were huge, daily protests, then, too. It was called "the Pots and Pans Revolution."

The entire economy was in freefall. Inflation skyrocketed, unemployment more than quadrupled, and the three banks were NOT too big to fail; they were too big to save, valued at 10.5 times Iceland's GDP.

At the same time, Americans were angry, too. In the United States, more than 8 million jobs were lost; more than 5 million people lost their homes. But Congress spent $700 billion in taxpayer monies to bail out the banks, and their executives kept right on collecting their high salaries and bonuses.

Not so in Iceland.

Olafur Hauksson was appointed special prosecutor, and given a hefty budget and a mandate.

Outside Hauksson's office, something not seen elsewhere: the country's top bankers, facing charges of market manipulation and fraud, ambushed by the media.

Between 20 and 30 bankers have gotten jail sentences. Siguron Arnason, former CEO of Landsbanki, will begin serving a five-year prison sentence in the fall.

His lawyer, "Siggi" Gudjonsson, considers the prosecutions as political theater, likening it to a witch hunt. "This was part of a show. The people were angry, so you had to come up with some kind of political solution," he said.

The bankers are sent to Kviabryggja Prison -- no bars, but hours from anywhere. An Icelandic journalist, allowed in for an interview, was told by Magnus Gudmundsson, former CEO of Kaupthing Luxembourg, "We never did anything that wasn't in the interest of the bank or its clients."

Information security consultant Marino Njalsson was one of thousands of property owners who lost homes. "The worst thing was the broken trust," Njalsson said. "That's why nobody feels pity for the bankers in jail, because they cheated on us. They told us lies, they covered up, and we were the one that was paying for it."

Iceland's economy has recovered, and how it dealt with its banks and bankers has taken on a kind of neat, mythical they-did-it-right quality for many people.

But here, as last week's events make plain, the anger remains, ready to erupt at any time.