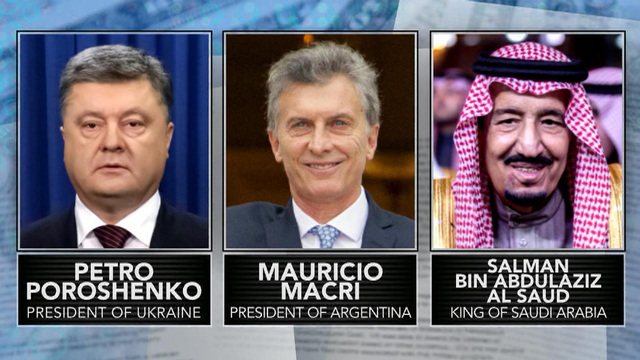 On Monday, we got a rare look at how the world's rich and powerful hide their money offshore.

A group of reporters has gotten a hold of 40 years worth of files from the computers of a law firm in Panama that specializes in stashing money in shell companies off shore.

Some of the names revealed in the documents are a rogue's gallery of dictators and criminals. But also included are 12 world leaders who've allegedly hidden wealth and evaded taxes in offshore accounts.

The unprecedented leak had an immediate impact.

In Iceland, the prime minister walked out of an interview after he was asked to explain how he and his wife used an offshore company to allegedly hide a $4 million investment.

In Ukraine, while his country was at war, the leaked documents indicate that President Petro Poroshenko moved his business fortune to the British Virgin Islands to avoid paying taxes.

Michael Hudson is one of the reporters who has been studying the documents for months.

"The paperwork said clear that they wanted it structured in a way that the profits from these investments would not be taxed in the UK," he said.

Mossack Fonseca specializes in offshore finances, and while that's not generally illegal, journalists who have seen the documents say the leak reveals money-laundering schemes, sanctions busting and other crimes.

The documents also show how close associates of Vladimir Putin allegedly ran a multi-billion dollar money laundering ring through the bank Rossiya -- while it was subject to U.S. sanctions after Russia annexed Crimea.

In an interview with a Panamanian TV station, the law firm's co-founder said they have never been found guilty of anything in their 40 years of business.

"We are a knife factory," he said. "What people do with the knife is not our business."

So far, no American politicians or companies have been named. But there are other investigations already underway around the globe, including Australia, Germany, The Netherlands and France.