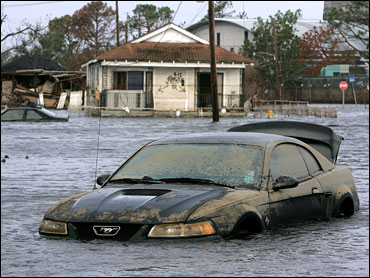 Hurricane Rita left floodwaters lapping at the high-water marks set by Katrina just three weeks ago, raising questions about how swiftly New Orleans can recover from its epic flooding and providing a grim reminder that the city remains in peril even as it seeks to rebuild.

Despite the setback, Mayor Ray Nagin said Saturday that he hoped to resume a plan to move residents back into neighborhoods that remained relatively dry, including the city's business district.

Federal officials said it will take two to three weeks to pump out the latest floodwaters, which began pouring in Friday through levees that were patched after the previous hurricane. On Saturday, water rose to the tops of cars in one neighborhood and seeped into homes in other sections of the city that were pumped dry days ago.

"The surge got higher than we expected in the canal," said Dan Hitchings, an engineer overseeing recovery operations for the U.S. Army Corps of Engineers.

The biggest failure was on the Industrial Canal, where a storm surge pushed by Rita's winds topped a levee that had been patched with rock and gravel. The water cascaded into the city's impoverished Ninth Ward, flooding homes to their windows.

The flow out of the canal stopped Saturday afternoon, as water levels fell and weather improved, but more rain could cause renewed flooding.

Last week, Nagin delayed plans to allow some residents to return after it became clear that Rita posed a serious danger and federal officials warned of the problems that could face residents coming back to the city. He said Saturday that the latest storm had postponed recovery efforts by another three to five days.

"What I hope to do is very systematically repopulate the city," he said during a news conference, adding that he thought the dry districts would eventually support a population of between 250,000 and 300,000.

"I have no idea what's beyond that because the houses stayed in water for so long," he said.

He said he wanted residents of the Algiers neighborhood, which has electricity and water, to start returning as early as Monday or Tuesday, following with other areas.

"We're talking about people who are mobile. We're not asking people to come back who have a lot of kids, a lot of senior citizens," Nagin said. "That's going to be the reality of New Orleans moving forward."

Coast Guard Vice Adm. Thad Allen, who is in charge of the federal disaster effort in New Orleans, had no immediate comment, a spokesman said.

The Army Corps of Engineers estimates the city's system of levees won't be completely repaired until June. Its commander in New Orleans cautioned about the makeshift status of the repairs until then. With a month left in hurricane season, there's no guarantee that another storm will not undo the next round of hard work to bring New Orleans back to life.

"It's so dependent on the weather," said Col. Richard Wagenaar, the corps' district chief in New Orleans.

The effort to rebuild the city will be massive, including unprecedented efforts to demolish flood-ruined buildings and resume electricity, drinking water and sewage services. The effort to plug the latest breach in the Industrial Canal levee began Saturday with sand bags and boulders.

Elsewhere in the city, flooding remained from lesser levee problems, heavy rains and Lake Ponchartrain, which lapped over the seawall on Friday and remained above its normal level.

On the streets of New Orleans, the new flooding in the Ninth Ward brought a stoic response from locals helping to clean up a pub on St. Charles Avenue. "They need to start getting people back into the city, to do all the work that needs to be done," Neuell Griffith said.