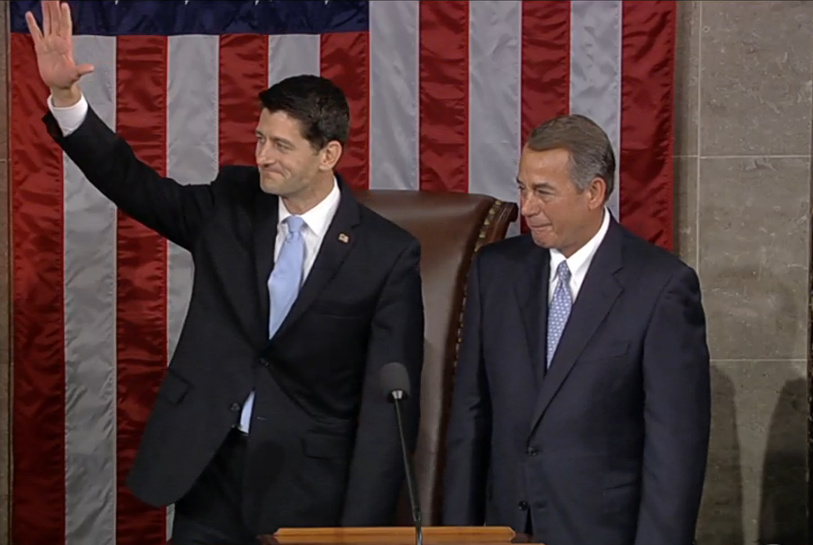 The House on Thursday morning elected Rep. Paul Ryan, R-Wisconsin, as the next speaker of the House.

Ryan, 45, who was nominated by Republicans a day earlier, received 236 votes on the floor. The nine-term congressman needed 218 votes to win the election.

A handful of Republicans voted for Rep. Daniel Webster, R-Florida, who also ran for speaker.

Most Democrats voted for House Minority Leader Nancy Pelosi, D-California, to be the next speaker. One Democrat voted for former Secretary of State Colin Powell and a few other members received votes. The speaker does not have to be a member of Congress.

"I never thought I'd be speaker, but early in my life, I wanted to serve this House," Ryan said in a speech from the floor. "We are wiping the slate clean."

He reiterated his goal to return the House to "regular order," giving committees the lead in drafting major pieces of of legislation.

"We will not duck the tough issues. We will take them head on," Ryan said.

Ryan's wife and three children watched from the speaker's box as well as other family members and friends, including 2012 GOP presidential nominee Mitt Romney and his wife Ann Romney. Ryan was Romney's running mate.

He became the 54th speaker of the House as he was sworn in, with his hand placed on his own New American Standard Bible that he uses for weekly bible study, his aide said.

The gavel Ryan will use in his leadership post is the same one he used as chairman of the House Ways and Means Committee, which he had led since January.

Ryan moved to Washington in 1992. For his first job, he worked for then Sen. Bob Kasten, R-Wisconsin, as an aide on the Senate Small Business Committee. After a few more jobs on and off Capitol Hill, Ryan moved back to Janesville, Wisconsin in 1998 and won his first election to the House at the age of 28.

He became chairman of the House Budget Committee in 2011 where he developed multiple conservative budget blueprints.

In 2013, he struck a bipartisan budget deal to alleviate sequestration spending caps with then-Senate Budget Committee Chairwoman Patty Murray, D-Washington. The House passed a similar deal on Wednesday that lifts spending ceilings over two fiscal years and raises the debt ceiling through mid-March 2017.

Before Ryan's election, Speaker Boehner, R-Ohio, delivered a brief farewell speech from the House floor Thursday morning, bringing a box of tissues to the dais.

Under his leadership, Boehner said the House has passed major entitlement reforms that will save trillions of dollars, protected Americans from tax increases and banned earmarks entirely.

"I leave with no regrets, no burdens. If anything, I leave the way I started. I'm just a regular guy humbled by the chance to do a big job," Boehner said.

Boehner recalled that a young man campaigned for him during his first race for the House in 1990. It was Paul Ryan, who was a student at Miami University at the time.

"Paul is being called," Boehner said. "I know he'll serve with grace and with energy."

Ryan's election comes a few days before Boehner is set to resign from Congress and after House Republicans spent weeks searching for the next speaker.

In early October, House Majority Leader Kevin McCarthy, R-California, shocked Capitol Hill when he announced his decision to withdraw from the speaker's race.

Ryan had officially entered the race last Thursday after receiving the backing of two major GOP caucuses and a supermajority of the conservative Freedom Caucus.

Since Boehner announced his plan to resign in September, Ryan had repeatedly said he wasn't interested in taking the gavel and wanted to focus on his job as chairman of the tax-writing House Ways and Means Committee. But GOP leaders, rank and file, and Republicans outside of the Beltway pushed Ryan to run.

Boehner now plans to submit letters of resignation to both Ryan and Ohio Gov. John Kasich. He will officially resign from his seat at the end of the day on Saturday.

On Wednesday, after his fellow Republicans nominated him, Ryan told reporters that he would deliver a new vision for the Republican Party.

"This begins a new day in the House of Representatives," Ryan said. "Tomorrow, we are turning the page. We are not going to have a House that looked like it looked the last few years."