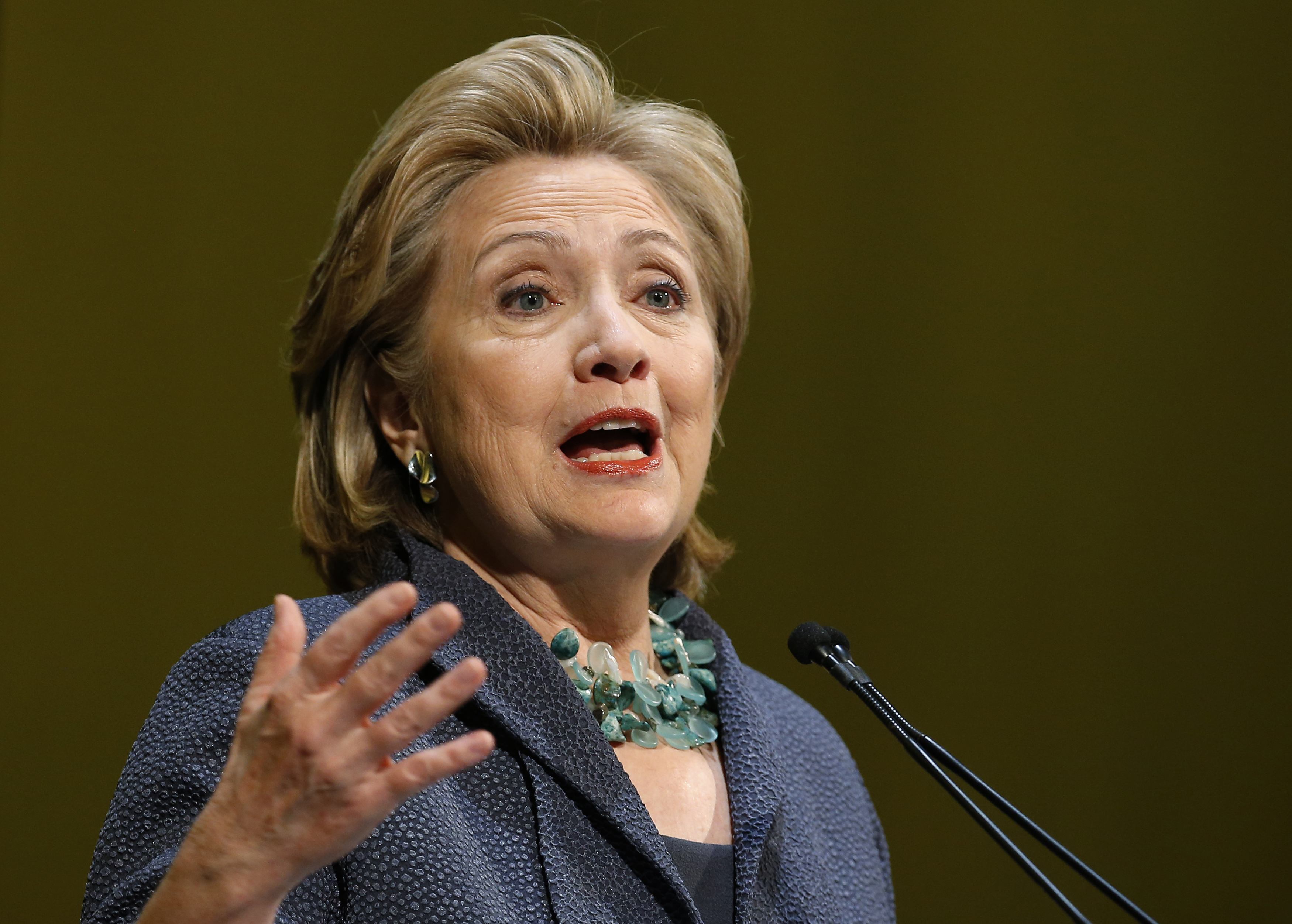 Former Secretary of State Hillary Clinton said on Wednesday that some world leaders "may not be happy" when they read her new memoir "Hard Choices."

"I'm looking at you, Vladimir," she joked, referring to Russian President Vladimir Putin, who's publicly directed a few barbs her way in recent weeks.

After Clinton compared Russia's recent aggression in Eastern Europe to Germany's actions under Adolf Hitler prior to World War II, Putin struck back in a radio interview last week.

"It's better not to argue with women," Putin said during an interview for Radio Europe 1 and TF1 TV channel. "But Ms. Clinton has never been too graceful in her statements."

Clinton did not address Putin's dig in her appearance on Wednesday, during which she fielded friendly questions from Chicago Mayor Rahm Emanuel, a former chief of staff to President Obama and an adviser to former President Bill Clinton.

But she did criticize the Russian leader's push for anti-gay laws as a "cynical political ploy."

"I've had shouting matches with top Russian officials about this," she recalled, saying the U.S. must continue to stand on the "front line" in the fight for LGBT equality.

As she has in other recent public appearances, Clinton also discussed her record at the State Department. She named a restoration of American leadership as her principal accomplishment as secretary of state, saying a lot of countries were "looking at us in a quite negative way for all kinds of reasons" when she and Mr. Obama took office.

She cited her work bringing Iran to the bargaining table over its nuclear program, and her negotiation of a 2012 ceasefire between Israel and the Palestinians "to defend Israel's security and head off another war in the Middle East."

Ahead of her much-ballyhooed 1995 speech in China stressing the importance of human rights, Clinton recalled some consternation among her husband's advisers about the punchy tone of her speech.

As she cast a significant glance in Emanuel's direction, Clinton joked that an "anonymous" aide to her husband moaned, "There she goes again. Can't you control your wife, Mr. President?"

Emanuel threw his head back and laughed.

Clinton's other story dealt with the 2009 conference on climate change in Copenhagen, where she and Mr. Obama were trying to persuade developing countries like China and India to rein in their greenhouse gas emissions.

Delegates from those countries were "hiding from us," Clinton recalled, so she and Mr. Obama "sent out scouts" and "crashed" their meeting.

After muscling their way through a fleet of Chinese officials trying to block their path, Clinton and Mr. Obama strode into the meeting. "Hey, we've been looking for you!" Clinton joked. "Where's the potluck?"

She embraced the comprehensive immigration bill passed last June by the Senate as a "fair compromise," saying one of America's greatest strengths "is that we are a nation of immigrants."

And on economic policy, she brandished the record of her husband, saying his presidency proved "1000 percent" that the GOP-embraced theory of "trickle-down economics does not work." She urged policymakers to take measures that would grow the economy from the middle class outward, rather than from the top down.