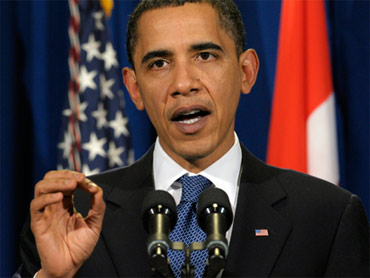 President Barack Obama said the United States, China and several other countries reached an "unprecedented breakthrough" Friday to curb greenhouse gas emissions - including a mechanism to verify compliance - after a frenzied day of diplomacy at the U.N. climate talks.

The agreement, which also includes the developing nations of India, South Africa and Brazil, requires each country to list the actions they will take to cut global warming pollution by specific amounts, a senior Obama administration official said. The official described the deal on the condition of anonymity because specific details had not been announced.

The deal reiterates a goal that eight leading industrialized nations set earlier this year on long-term emission cuts and provides a mechanism to help poor countries prepare for climate change, the official said.

But it falls far short of committing any nation to emissions reductions beyond a general acknowledgment that the effort should contain global temperatures along the lines agreed to by the leading economic nations in July.

A European Union news conference to announce the EU reaction was postponed and an official said an overall agreement involving those nations not included in the deal that Mr. Obama announced was still being negotiated.

Mr. Obama suggested that Friday's agreement among the five countries would be adopted by the larger summit in its closing hours.

"I am leaving before the final vote," he said. "We feel confident we are moving in the direction of a final accord."

If the countries had waited to reach a full, binding agreement, "then we wouldn't make any progress," Mr. Obama said. In that case, he said, "there might be such frustration and cynicism that rather than taking one step forward we ended up taking two steps back."

Mr. Obama spent the final scheduled day of the climate talks meeting with world leaders, including Chinese Premier Wen Jiabao, in a bid to salvage the global warming accord amid deep divisions between rich and poor nations.

In announcing the five-nation deal, Mr. Obama said getting a legally binding treaty "is going to be very hard, and it's going to take some time."

"We have come a long way, but we have much further to go," he said.

The president said there was a "fundamental deadlock in perspectives" between big, industrially developed countries like the United States and poorer, though sometimes large, developing nations. Still he said this week's efforts "will help us begin to meet our responsibilities to leave our children and grandchildren a cleaner planet."

The deal as described by Mr. Obama reflects some progress helping poor nations cope with climate change and getting China to disclose its actions to address the warming problem.

He said the nations of the world will have to take more aggressive steps to combat global warming. The first step, he said, is to build trust between developed and developing countries.

The deal struck Friday includes a method for verifying reductions of heat-trapping gases, the official said. That was a key demand by Washington of China, which has resisted international efforts to monitor its actions.

"It's not what we expected," Brazilian Ambassador Sergio Barbosa Serra said. "It may still be a way of salvaging something and paving the way for another a meeting or series of meetings next year."

Mr. Obama had planned to spend only about nine hours in Copenhagen as the summit wrapped up. But, as an agreement appeared within reach, he extended his stay by more than six hours to attend a series of meetings aimed at brokering a deal.

"I see Kyoto as a first step," Macey said. "This another first step, a global first step."

More than anything, Macey found the United Nations process on climate change "appalling."

The two-week, 193-nation conference has been plagued by growing distrust between rich and poor nations. Both sides blamed the other for failing to take ambitions actions to tackle climate change. At one point, African delegates staged a partial boycott of the talks.

"We are ready to get this done today but there has to be movement on all sides to recognize that is better for us to act rather than talk," Mr. Obama had said in an address to the conference, insisting on a transparent way to monitor each nation's pledges to cut emissions.

Abandoning any hope of reaching a comprehensive deal, a group of about 25 countries had sought agreement on a two-page political statement setting out critical elements, key among them the mobilization of $30 billion in the next three years to help poor countries cope with climate change and a scaling up to $100 billion a year by 2020.

As negotiations evolved, new drafts of the document, titled the Copenhagen Accord, emerged with key clauses being inserted, deleted and reintroduced with new wording.

In the end, the statement set no overall emissions targets for rich countries.

South Korea's chief negotiator, Rae-Kwon Chung, said one of the sticking points was a clause saying the combined emissions of rich and poor countries should be cut in half by 2050. Some developing countries opposed that target, fearing it would "define their carbon space," he said, declining to identify them.

With the climate talks in disarray, Mr. Obama and Wen met twice Friday - once privately and once with other world leaders present - in hopes of sweeping aside some of the disputes that have barred a final deal.

Tempers flared as Mr. Obama prepared for the second meeting with the Chinese, reports CBS News correspondent Sheila MacVicar from Copenhagen. There was a scuffle over media access - a diplomatic courtesy.

"These two powers, very wary of each other, are each desperate not to have a deal here that will give strategic and economic advantage to the other," New York Times columnist Thomas Friedman told "Early Show" co-anchor Harry Smith Friday.

However, officials said the two leaders took a step forward in their talk and directed negotiators to keep working, but the degree of progress was not immediately clear.

Wen skipped a high-level meeting a second time and sent another envoy instead.

Diplomats and leaders had only a handful of hours left for high-level talks to find the "miracle" answer that Brazilian President Luiz Inacio Lula da Silva said was needed for more than 110 leaders to sign a deal at the conference's finale. Frustration and discouragement outweighed hope in the addresses by leaders to the conference Friday.

Many delegates had been looking toward China and the U.S. - the world's two largest carbon polluters - to deepen their pledges to cut their emissions. But that was not to be.

"President Obama was not very proactive. He didn't offer anything more," said delegate Thomas Negints, from Papua New Guinea. He said his country had hoped for "more on emissions, put more money on the table, take the lead."

Money to help poor nations cope with climate change and shift to clean energy seemed to be where negotiators could claim most success. Pollution cuts and the best way to monitor those actions remained unresolved.

Swedish Environment Minister Andreas Carlgren, negotiating on behalf of the 27-nation European Union, blamed the impasse on the Chinese for "blocking again and again," and on the U.S. for coming too late with an improved offer, a long-range climate aid program announced Thursday by Clinton.

A leading African delegate complained bitterly about the proposed declaration.

"It's weak. There's nothing ambitious in this text," said Lumumba Di-Aping of Sudan, a leader of the developing nations bloc.

China and the U.S had sought to give the negotiations a boost Thursday with an announcement and a concession.

Clinton said Washington would press the world to come up with a climate aid fund amounting to $100 billion a year by 2020, a move that was quickly followed by an offer from China to open its reporting on actions to reduce carbon emissions to international review.