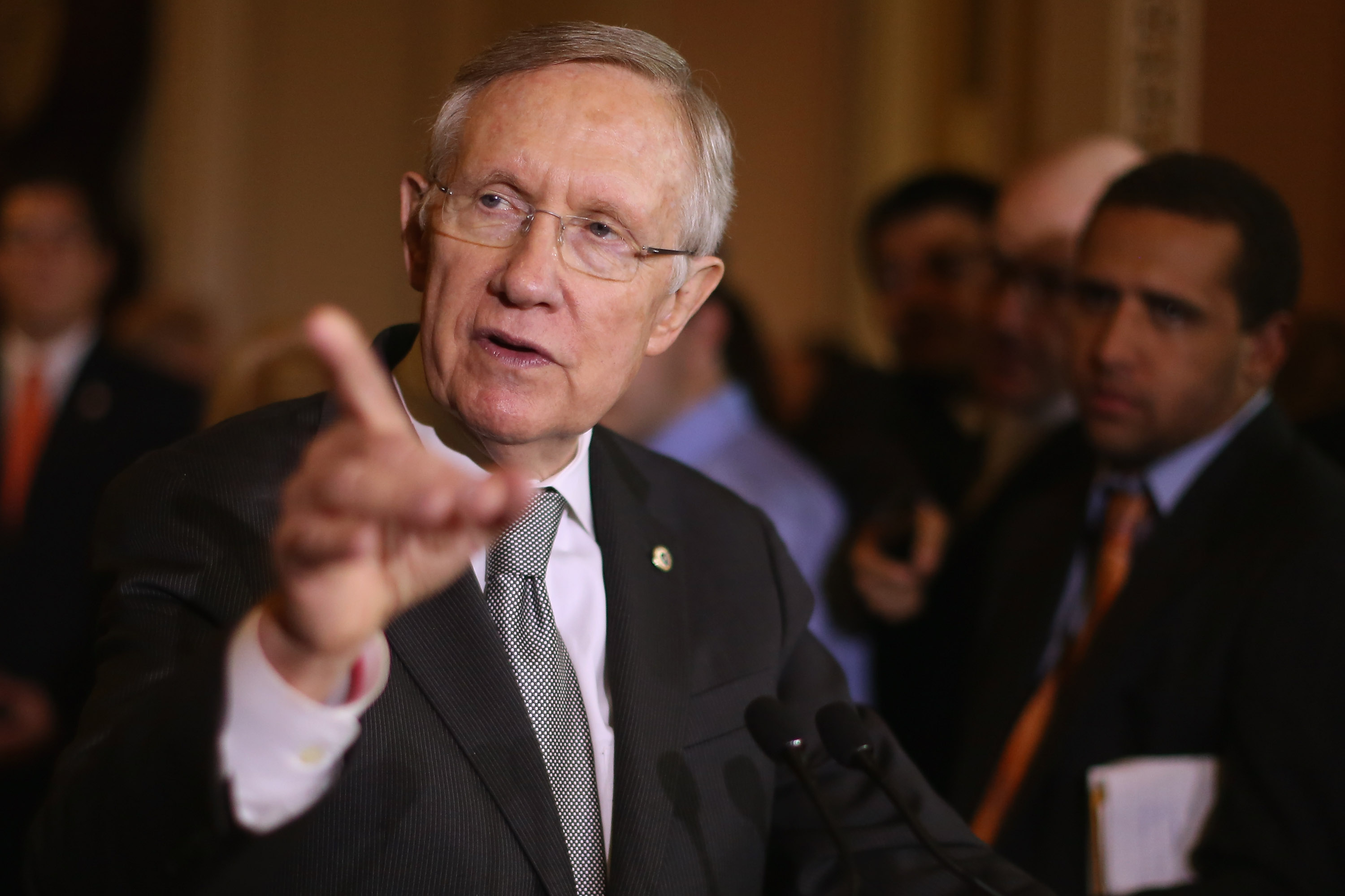 President Obama has been facing a barrage of criticism from Republican lawmakers for not pushing to leave a residual troop presence behind in Iraq after 2011, but has found a defender in Senate Majority Leader Harry Reid, D-Nev.

"Those who attack President Obama for bringing our troops home are flat wrong in criticizing him for that, and they're out of step not only with the president but with the American people," Reid told reporters Tuesday. "After a decade of war we've all had enough. I do not support putting our men and women in harms way in Iraq."

Reid, like many Democrats, was a staunch opponent of the war. But his opposition to any American troops returning to Iraq in the coming days may land him on the opposite side of the issue from Mr. Obama. The White House is considering sending a small number of American special forces soldiers to Iraq to aid the government in Baghdad as it tries to fend the advance of the Islamic State of Iraq and Syria (ISIS), which has taken several towns and cities in the northern part of the country. Mr. Obama also notified Congress Monday afternoon that up to 275 U.S. military personnel have been deployed to Iraq to provide support and security to Americans and the U.S. Embassy in Baghdad.

The soldiers would help train Iraqi forces, as they were doing when Americans left in 2011, but would not go into the field. Aside from a pledge not to send combat troops back to the country, Mr. Obama has said he is ruling nothing out and has asked his national security team for a range of other options.

The number two Democrat in the House, Rep. Steny Hoyer of Maryland, said Tuesday that the U.S. "should be considering" air strikes to degrade ISIS.

While he said he had not spoken to enough Democrats to know if they shared his opinion, he predicted they would see the potential consequences for the U.S. of failing to help stabilize the country.

Although most Democrats lay the blame for the ISIS attacks with Iraqi Prime Minister Nouri al-Maliki - and Republicans agree it is party his responsibility - the GOP has repeatedly pointed to the president's failure to secure an agreement that would have allowed more troops to remain behind after the war was over. On Tuesday, Senate Minority Leader Mitch McConnell, R-Ky., also said the president needs to rethink the decision to end the U.S. troop presence in Afghanistan by 2016.

"We know that if we don't leave behind a deployment that the military has recommended in Afghanistan of roughly 10,000 troops for counterterrorism purposes and training purposes you're likely to see the same kind of meltdown in Afghanistan that we've seen in Iraq," McConnell said. "I hope the president at least looking to the future has learned something from this and will reverse his decision to leave Afghanistan entirely."

McConnell did not offer his own recommendations on how to proceed, but said he is "anxious" to see what the president will recommend. He is slated to meet with Mr. Obama at the White House Wednesday along with Reid, House Speaker John Boehner, R-Ohio, and House Minority Leader Nancy Pelosi, D-Calif.

"The Speaker expects the President to offer a coherent strategy to ensure that Iraq does not descend further into lawless barbarism. We spent years, vast sums of money, and - most importantly - thousands of American lives to improve Iraq's security and make America safer. Squandering that legacy would be a tragic mistake," said Boehner spokesman Michael Steel.

Other Republicans have expressed frustration with the slow pace of action on Iraq by the White House.

"Here we are these many days later and the only concrete action that has been taken so far is to reinforce the embassy," said Sen. John McCain, R-Ariz. "Meanwhile, the success of ISIS continues unabated. It's really, really remarkable."

On Monday, McCain called for "rapid, decisive U.S. action to degrade ISIS and halt their offensive in Iraq," including a dramatic increase U.S. military assistance and support to moderate opposition forces in Syria.