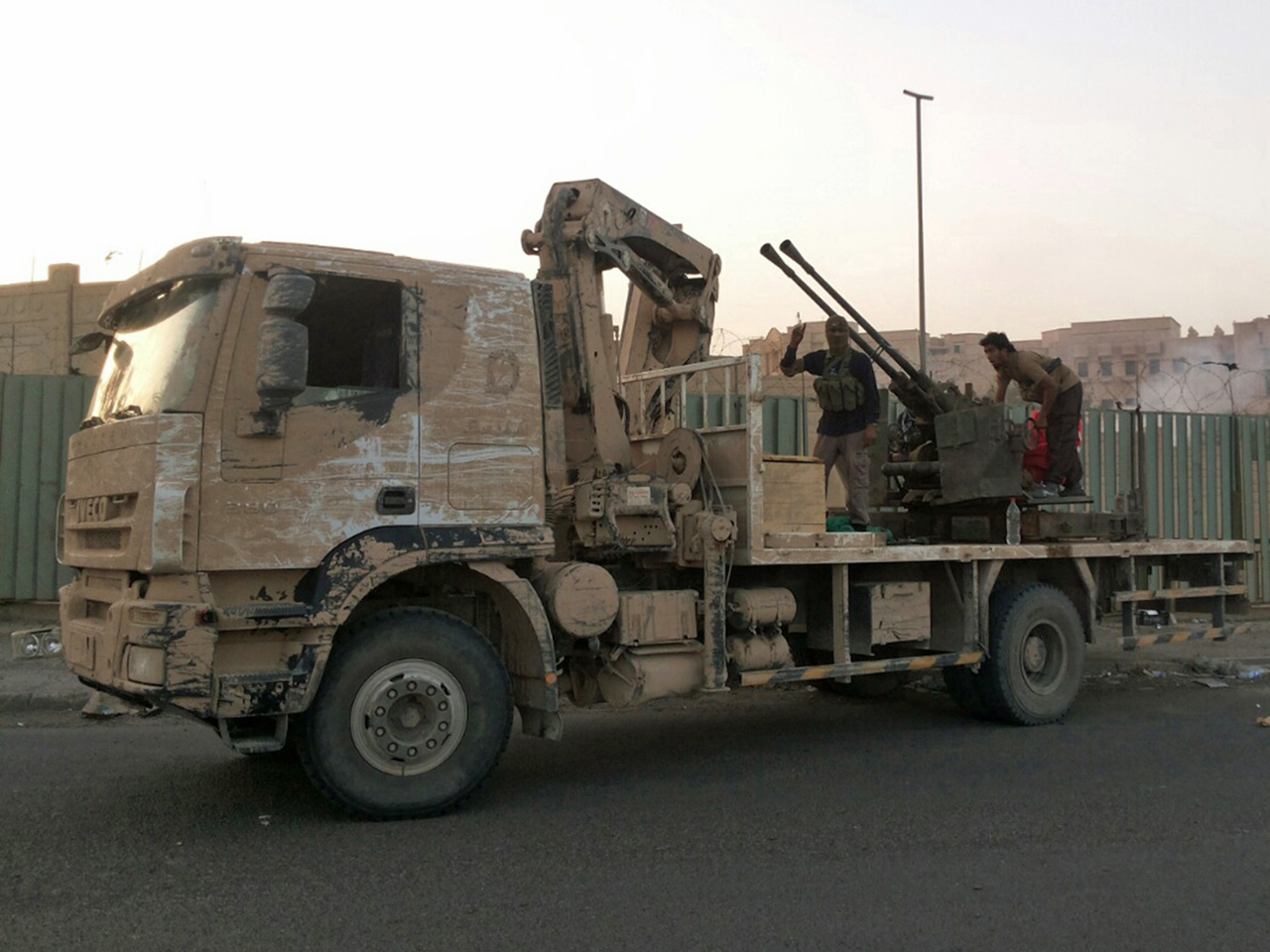 BAGHDAD -- Islamic militants who seized cities and towns vowed Thursday to march on Baghdad to settle old scores, joined by Saddam Hussein-era loyalists and other disaffected Sunnis capitalizing on the government's political paralysis over the biggest threat to Iraq's stability since the U.S. withdrawal.

Trumpeting their victory, the militants also declared they would impose Shariah law in Mosul and other areas they have captured.

In northern Iraq, Kurdish security forces moved to fill the power vacuum - taking over an air base and other posts abandoned by the military in the ethnically mixed city of Kirkuk. The move further raised concern the country could end up partitioned into Sunni, Shiite and Kurdish zones.

Three planeloads of Americans were being evacuated from a major Iraqi air base in Sunni territory north of Baghdad, U.S. officials said, and Germany urged its citizens to immediately leave parts of Iraq, including Baghdad.

A Pentagon official told CBS News correspondent David Martin that no decision has been made to provide additional assistance or what it would look like. Air strikes are being looked at as an option, but "we are no closer (to air strikes) today than yesterday," said the official, who added it was unclear how effective the strikes would be.

The assessment is that Baghdad is "in jeopardy," the official said.

President Barack Obama said Iraq will need more help from the United States, but he did not specify what it would be willing to provide. Senior U.S. officials who spoke on condition of anonymity because they were not authorized to discuss the matter by name said Washington is considering whether to conduct drone missions in Iraq.

Prime Minister Nouri al-Maliki had asked parliament to declare a state of emergency that would give him and his Shiite-led government increased powers to run the country, but the lawmakers failed to assemble a quorum.

CBS News correspondent Holly Williams reports from the city of Erbil that Iraq's government said it is carrying out military airstrikes against militant strongholds. The government released video Thursday showing an airstrike.

The Islamic State, whose Sunni fighters have captured large swaths of territory in Iraq and Syria, aims to create an Islamic emirate spanning both sides of the border. It has pushed deep into parts of Iraq's Sunni heartland once controlled by U.S. forces because police and military forces melted away after relatively brief clashes, including in Iraq's second-largest city of Mosul.

Skirmishes continued in several areas. Two communities near Tikirt - the key oil refining center of Beiji and the city of Samarra, home to a prominent Shiite shrine - remained in government hands, according to Iraqi intelligence officials. The price of oil jumped to above $106 a barrel as the insurgency raised the risk of disruptions to supplies.

In its statement, the Islamic State declared it would start implementing its strict version of Shariah law in Mosul and other regions it had overrun. It said women should stay in their homes for modesty reasons, warned it would cut off the hands of thieves, and told residents to attend daily prayers. It said Sunnis in the military and police should abandon their posts and "repent" or else "face only death."

The Islamic State's spokesman vowed to take the fight into Baghdad. In a sign of the group's confidence, he even boasted that its fighters will take the southern Shiite cities of Karbala and Najaf, which hold two of the holiest shrines for Shiite Muslims.

"We will march toward Baghdad because we have an account to settle there," he said in an audio recording posted on militant websites commonly used by the group. The statement could not be independently verified.

Baghdad does not appear to be in imminent danger of a similar assault, although Sunni insurgents have stepped up car bombings and suicide attacks in the capital recently.

While ISIS fighters gained the most attention in this week's swift advances, it was increasingly clear that other Sunnis were joining the uprising.

Several militant groups posted photos on social media purporting to show Iraqi military hardware captured by their own fighters, suggesting a broader-based rebellion like that in neighboring Syria.

In Saddam's hometown of Tikrit, overrun by militants Wednesday, witnesses said fighters raised posters of the late dictator and Izzat Ibrahim al-Douri, his former deputy who escaped the 2003 U.S.-led invasion and eluded security forces ever since.

Fighters loyal to his Naqshabandi Army as well as former members of Saddam's Baath Party were the main militant force in Tikrit on Thursday, said a resident who identified himself by his nickname, Abu Mohammed, out of concern for his safety. He said about 300 soldiers surrendered near the governor's office - a spectacle captured in multiple amateur videos posted online.

Lawmaker Hakim al-Zamili as well as two senior intelligence officials, who were not authorized to talk to the press, confirmed the involvement of al-Douri's group and other former Baathists and Saddam-era military commanders. That could escalate the militants' campaign to establish an al-Qaida-like enclave into a wider Sunni uprising and lead to breaking up the country along ethnic and sectarian lines.

Feisal Istrabadi, a former Iraqi ambassador to the U.N., said the rapid fall of Mosul and Tikrit required trust from the local population - something ISIS or al-Douri wouldn't necessarily have on their own.

"Ordinary citizens feel disenfranchised and have no stake in the state anymore," he said. "This is an alliance of convenience where multiple disaffected groups have come to defeat ... a common foe. "

With its large Shiite population, Baghdad would be a far harder target for the militants. So far, they have stuck to the Sunni heartland and former Sunni insurgent strongholds where people are already alienated by al-Maliki's government over allegations of discrimination and mistreatment. The militants also would likely meet far stronger resistance, not only from government forces but by Shiite militias.

Baghdad authorities tightened security and residents stocked up on essentials.

"Everybody I know is worried for the safety of his family as the militants are advancing to Baghdad," said Hazim Hussein, a Shiite shopowner and father of three.

Another Baghdad merchant, Mohammed Abdul-Rahim, a Sunni, lamented that the "future of this country looks more dim than any time in modern Iraqi history."

Hundreds of young men crowded in front of the main army recruiting center in Baghdad on Thursday after authorities urged Iraqis to help battle the insurgents.

Security officials said the Islamic State fighters managed to take control of two weapons depots holding 400,000 items, including AK-47 rifles, rockets and rocket-propelled grenades, artillery shells and mortars. A quarter of the stockpiles were sent to Syria, they said.

"We do have a stake in making sure that these jihadists are not getting a permanent foothold in either Iraq or Syria, for that matter," Obama said in Washington.

Britain and France said it was up to Iraqi authorities to deal with terrorism and worsening security, while Russian Foreign Minister Sergei Lavrov said the rapid advances by the militants proved the invasion of Iraq 11 years ago had been a fiasco.

"What is happening in Iraq is an illustration of the total failure of the adventure undertaken primarily by the U.S. and Britain and which they have let slip completely out of control," Lavrov was quoted by Russian state news agencies as saying.

In Shiite powerhouse Iran, President Hassan Rouhani blasted the Islamic State as "barbaric." Foreign Minister Mohammad Javad Zarif offered support in a phone call with his Iraqi counterpart, Iranian TV reported. Iran has halted flights to Baghdad because of security concerns and has intensified security on its borders.

The U.N. Security Council urged a national dialogue including all political and religious groups in Iraq but took no action after discussing the crisis and hearing a closed briefing from the top U.N. envoy in Iraq, Nickolay Mladenov.

Diplomatic efforts were underway to free 80 Turkish citizens held by militants in Mosul, an official in the Turkish prime minister's office said. The captives include 49 people seized in the Turkish consulate Wednesday, said an official, who spoke on condition of anonymity because of the sensitivity of the issue.

Kurdish fighters from the ethnic group's autonomous enclave in the north showed signs of taking a greater role in fighting back against the ISIS. Their role is a potential point of friction because both Sunni and Shiite Arabs are wary of Kurdish claims on territory.

Kurdish security forces known as peshmerga took over an air base and other posts abandoned by Iraqi forces in Kirkuk, Brig. Halogard Hikmat, a senior peshmerga official told The Associated Press. He denied reports the whole city was under peshmerga control.