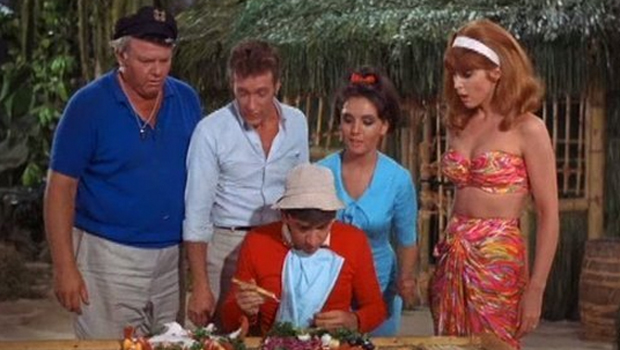 In the 1960s, Americans were faced with civil unrest, a growing war in Vietnam and the potential threat of nuclear annihilation from the Russians.

Perhaps it's no surprise then that "Gilligan's Island" -- with its trippy and light-hearted plotlines each week -- was a big hit with viewers, who may have wanted a diversion from the world around them.

The sitcom first landed on the airwaves on Sept. 26, 1964 on CBS, airing for three seasons for a total of 98 episodes.

It might have had a brief initial run, but the series remains one of the most syndicated shows on TV today. A half-century since its debut, fans of the show are as passionate as ever, although the series almost didn't come to fruition.

Series creator Sherwood Schwartz (who would later go on to create "The Brady Bunch") has said that he was met with a great deal of opposition while pitching his idea for the series the executives at CBS, who considered the premise too unrealistic and boring.

Alas, the execs relented, and a pilot episode was commissioned, to be shot on location in Hawaii.

Schwartz was interested in having Jerry Van Dyke (brother of Dick Van Dyke) star as the goofy first mate Gilligan, who causes the accident that lands himself and his Skipper (Alan Hale Jr.) and five passengers aboard the Minnow stranded on a remote deserted isle in the Pacific.

Like the studio heads, Van Dyke also didn't believe that the series had a chance of making it and instead agreed to star in another series, "My Mother the Car," which ended up only lasting for one season.

Bob Denver, at the time famous for his role as Maynard G. Krebs on "The Many Loves of Dobie Gillis," soon accepted the title role.

During filming of what would become the first pilot episode, cast and crew were notified in Hawaii of the assassination of President John F. Kennedy. Despite the shocking news, production eventually resumed.

For the entire series run, the opening credit sequence shows the S.S. Minnow (named as a joke after FCC chairman Newton S. Minnow, who actually hated TV) sailing out of a dock that has flags at half-mast because of JFK's death.

The first pilot was initially rejected by CBS, but a new episode was commissioned by the network in the hopes of saving the series.

Several original cast members and characters were replaced, including Bunny (Nancy McCarthy) -- who would later be known as Mary-Ann and played by Dawn Wells.

"I wanted to create a 'social microcosm'," Schwartz, who died in 2011 at 94, said in a 2001 interview when asked about the diverse characters on the series, including a very wealthy couple, an academic (The Professor, played by Russell Johnson), a movie star (Ginger, portrayed by Tina Louise) and a country girl (Mary-Ann).

With the cast now solidified, Schwartz was tasked with coming up with a new theme song (the first pilot had used a calypso-style number from composer John Williams).

"The Ballad of Gilligan's Isle," co-written by Schwartz and his friend George Wyle, still stands as one of the most popular and recognizable TV themes in history.

"We now had the cast, we had the song and off we went to Hawaii to do the show," said Schwartz.

Check out our gallery above for some fun facts about the show's stars.