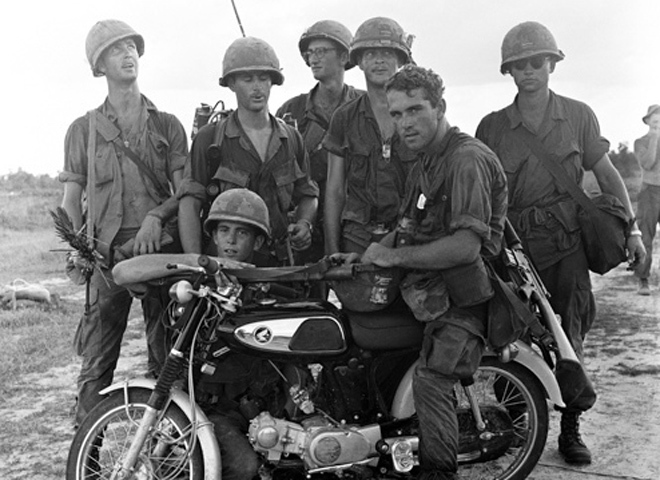 (CBS News) Of all the memorials to our veterans this holiday weekend, one man's long-forgotten photos offer a moving, personal tribute. Here's Lee Cowan:

At this woodworking shop in Portland, Ore., Charlie Haughey has become a quiet hero -- not only for the beautiful (and, we should point out, perfect) spheres that he crafts out of scraps of wood, but for his war stories, that he captured in black-and-white.

"I always felt that Vietnam gave me way more than it took from me," he told Cowan.

Charlie was drafted into the Vietnam War in 1967, and ended up a photographer assigned to the 25th Division, 2nd Battalion, 12th infantry.

His commanding officer had only one order: "He said, 'You're not a combat photographer; this is a morale job,'" Haughey recalled. "He wanted his guys in the paper. That was the whole function, to give the guys that were in the field, coverage.

It wasn't war at all; it was guys just doing a nasty job, a long ways from home.

Of course it was war, too, but Haughey's camera captured mostly the mundane, even light moments in the Vietnamese jungle.

But being the Battalion photographer hardly got him out of harm's way.

"No, no, it didn't," Haughey said. "It was a purpose. I mean, I had something to do besides wandering around out there looking for a fight, you know? It was just nice to have a purpose."

By the time Haughey's tour was up, he had taken almost two thousand pictures -- weary, thoughtful, playful.

He came home with all those negatives in tow, put them in envelopes in a shoebox . . . and that was that.

It wasn't just the memories of Vietnam that troubled him; it was the anti-war atmosphere at home. He tried going back to college, but it didn't work out.

"A former government-trained baby-killer wasn't the right thing to be on the campus at the time," Haughey said. "Nobody ever spit on me, but they went [spit] from across the street, you know? Things like that."

So for 45 years, that shoebox sat -- not forgotten, just avoided.

"And they still are in your mind, it seems like?"

"But because it's so, so personal, is that what makes it so hard in a lot of ways, to look?" Cowan asked.

"Well there's just places in my brain that I kind of walled off," he replied. "You take care of yourself that way, I guess.

"These just knocked down all the doors."

The doors opened thanks to Kris Regentine, who was re-building his motorcycle next to Charlie's woodworking shop.

A photographer himself, Regentine got to talking with Haughey about the Vietnam vet's long-ago job behind a lens, and Kris convinced Charlie a shoebox was no place for memories like that.

"When I first saw the first negative that I took out of the envelope, I immediately knew that it was going to be a collection of extremely powerful and important photographs," Regentine said.

Kris digitized each and every one, and put a handful on display in the shop. Much to his surprise, Charlie (and his photos) became the talk of the town. "I guess people see things in 'em, because I'm sure hearing a lot about them," he told Cowan.

Maybe it's because Charlie somehow captured the essence of not just fighting a war, but coping with war. Surviving that can be just as hard.

"Victory Gardens" for the war against COVID-19