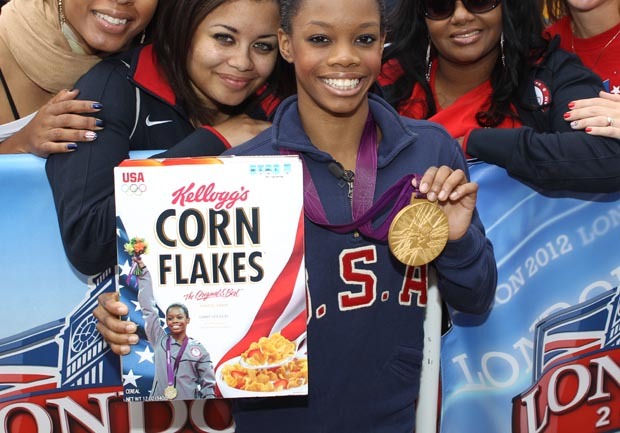 But now the 16-year-old Douglas stands to really strike it rich with product endorsements.

Kellogg's was quick to pounce, putting the golden girl on Corn Flakes boxes just hours after the gymnast claimed the all-around title Thursday.

As Reuters notes, Kellogg Co. acted just as quickly in 2008, when the cereal giant lured Michael Phelps as an endorser after his historic performance at the Beijing Games. Prior to that, Olympic stars had traditionally appeared on the front of Wheaties, which is made by rival General Mills.

The Kellogg deal likely won't be the last for Douglas, who is nicknamed the "Flying Squirrel."

"As a 16-year-old, she has really got kind of the sky is the limit. She brings so many intangibles that marketers look for. She's young. She's fresh. She's a new face," media consultant Joe Favorito told CBS News.

Douglas is the first African-American to make the U.S. women's gymnastics team since her idol, Dominique Dawes, in 1996.

Dawes told CBS News that Douglas can expect endorsement deals to begin pouring in. She said, "(Gabby is) going to start quickly recognizing that she's a business, she's a brand, and she should be very selective in the people she surrounds herself with and the opportunities she decides to take."