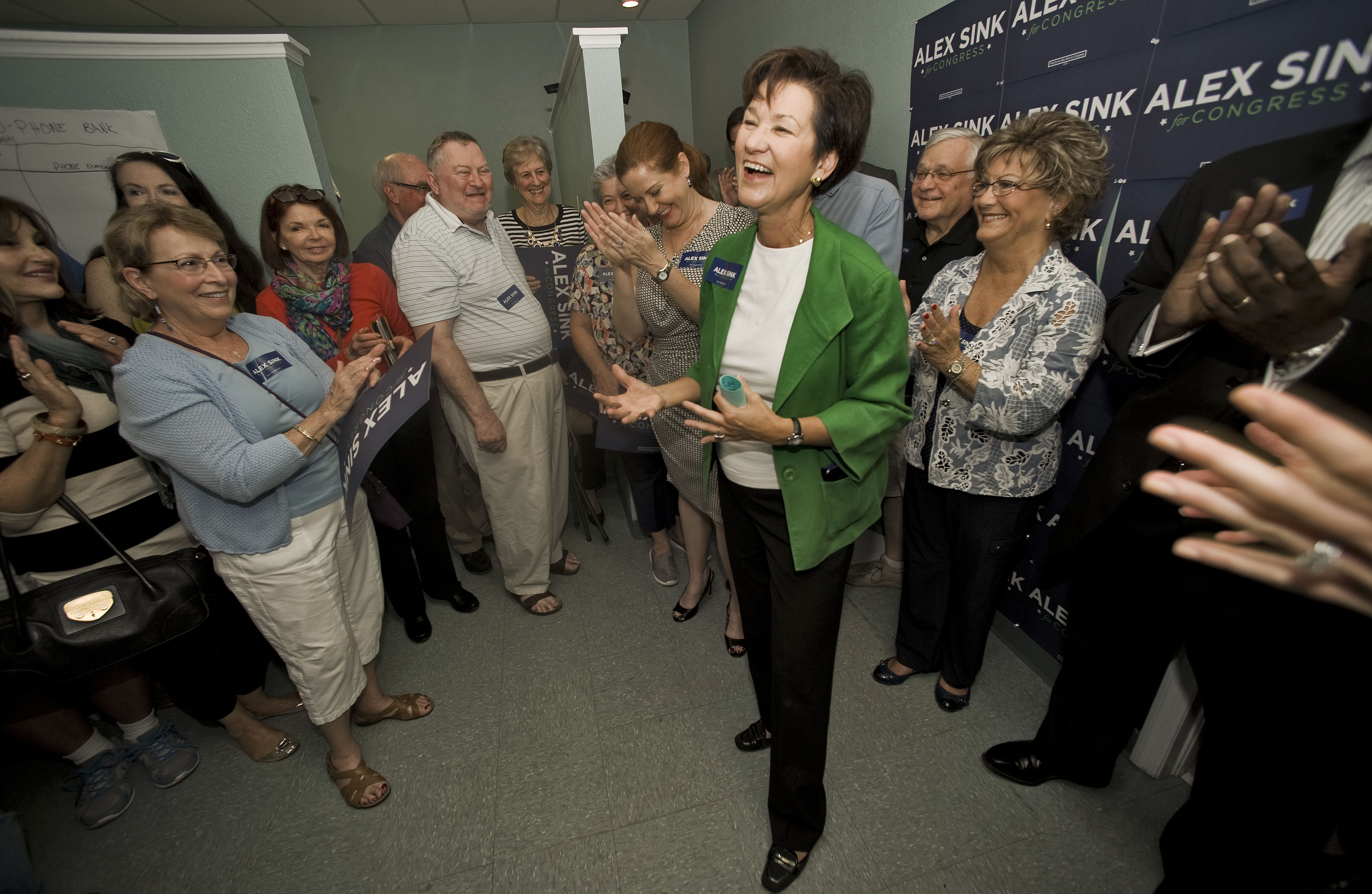 When voters cast their ballots in the Florida special election to fill the seat of the late Republican Rep. Bill Young on Tuesday, it won't be a make-or-break battle for Democrats looking to take over the House in the 2014 midterms.

It will, however, give the party a chance to field-test a message that they would like to rely on in other races across the country in November: that Democrats are the party looking out for the people, especially women.

The vehicle for that message has been Alex Sink, the former Florida Chief Financial Officer and failed 2010 Democratic gubernatorial candidate. On the campaign trail, she promises to bring a dose of bipartisan problem-solving to Washington, D.C. - and to vote for legislation like the Paycheck Fairness Act, which her opponent, Republican David Jolly, opposes.

Paycheck fairness, unemployment, minimum wage - if it benefits lower- and middle-class Americans, you'll likely hear it in the stump speeches of Democratic candidates around the country this summer and fall. On top of her I-stand-for-you message, Sink's campaign has worked hard to highlight Jolly's career as a lobbyist and tie that work to issues like Social Security benefits.

Jolly, who had to overcome a Republican primary before facing off against Sink in the general election, has veered toward the center on issues like same-sex marriage, abortion rights and even the debt ceiling (he would have voted to raise it, he said) during the general election. He has also harped on Sink for supporting Obamacare, previewing the message Republicans will carry into the midterms.

Money has poured into the race, with at least $8.3 million spent so far, much of it coming from outside groups. As of late February, Sink had raised more than $2.5 million, and Jolly about $1 million.

The seat has been Republican-held since 1983, but things are looking promising for Sink. According to the Miami Herald, she has a lead anywhere between 0.6 and 4 percentage points in an average of recent polls, and with ballots already coming in, her campaign has managed to partially make up some of the turnout gap between registered Democrats and Republicans in 2012.

President Obama won the district by about a point in 2012 after attracting many of the district's third- and non-party voters, even after the Republicans had a 7-point advantage on Election Day. But there's a complicating factor: Libertarian candidate Lucas Overby, who is getting at least six percent of the vote and will likely take away some of those independents. The good news for Sink: she's better at drawing Republicans than Jolly is at drawing Democrats, and Overby's poll averages also suggest he'll get more Republicans in the end.

Texas Senate: Republican Sen. John Cornyn easily fended off a host of primary challengers Tuesday night, as expected. Cornyn also finally won the endorsement of Texas' other Senate Republican, Ted Cruz. After refusing to endorse Cornyn in the primary, Cruz posted on Facebook Wednesday that he was "proud" to endorse his Senate colleague. "John is a friend and a good man," he wrote.
Arkansas Senate: Sen. Mark Pryor, D-Ark., took some heat this week after an interview with NBC in which he said his Republican opponent, Rep. Tom Cotton, has "blind ambition" and a "sense of entitlement" because he served in the military.

CPAC: A number of prominent Republicans are joining conservative activists this week at the Conservative Political Action Conference just outside of Washington, urging them to mobilize ahead of the midterms. Senate Minority Leader Mitch McConnell, R-Ky., who faces his own tough re-election bid, took the main CPAC stage Thursday to present retiring Sen. Tom Coburn, R-Okla., with a rifle -- a lifetime achievement award from the NRA.

McConnell said that if Republicans win control of the Senate in the fall and he becomes the majority leader, the Senate will be a place that conservatives like Coburn "can be proud of again."

Georgia Senate: Speaking of guns, the Senate campaign for Rep. Paul Broun, R-Ga., announced it's launching a second gun raffle. "Barack Obama and Michelle Nunn would like nothing more than to destroy the 2nd Amendment," the campaign website says.

Obama fundraisers: President Obama attended a pair of Democratic National Committee fundraisers in Massachusetts Wednesday, where he urged Democrats to think about the midterms before they think too much about the next presidential election.

"Nobody is going to be more invested than me in having a Democrat succeed me, to consolidate and solidify the gains that we've made during my presidency," he said at a DNC dinner in Boston. "But right now, we've got to make sure we're fighting in this election."
View CBS News In
CBS News App Open
Chrome Safari Continue