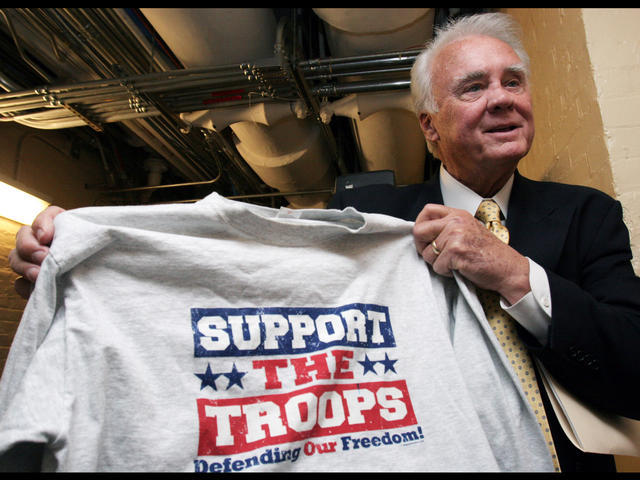 ST. PETERSBURG, Fla. Republican Rep. Bill Young, Florida's longest-serving member of Congress and a defense hawk who was influential on military spending during his 43 years in Washington, died Friday. He was 82.

His chief of staff, Harry Glenn, said Young died at Walter Reed Medical Center in Bethesda, Md., where he had been for nearly two weeks with back problems that stemmed from a 1970 small plane crash. On Oct. 9, from his hospital bed, Young announced that he would not seek another term in 2014.

As one of the strongest defense supporters in Congress, Young made headlines in 2012 when he said the United States should withdraw its forces from Afghanistan. Young told The Associated Press at the time that "we're killing kids who don't need to die," and reflected the growing weariness with a conflict that had dragged on for more than a decade.

Young, who had been involved in Florida politics since 1957, was considered the elder statesman of Florida's Republican Party and in the U.S. House of Representatives. He served 22 terms in Congress.

In recent years, Young became increasingly frail and relied on a wheelchair. He was quoted by The Tampa Tribune recently as saying that his decision to retire was based on both his health and a desire to spend more time with his family.

According to the Tampa Bay Times, Young received a call Wednesday from former President George W. Bush, who thanked Young for his support of the military.

He was first elected to the U.S. House in 1970. Young and his wife, Beverly, have three children.

The congressman was a longtime member of the House Appropriations Committee, where he focused on military spending. He and his wife frequently visited ailing service members at hospitals in the Washington area.

Young brought hundreds of millions of dollars in earmarks back to the Tampa Bay area, and built up a defense contracting industry in the region, creating jobs and stirring the economy.

Young's district, which encompasses almost all of densely populated Pinellas County, was already expected to be up for grabs in the 2014. His death makes it likely that Democrats will pour additional resources into the race. A special election will be held to finish his term.

According to the Florida Secretary of State's office, the district is composed of 37.7 percent Republicans, 35.2 percent Democrats, 23.2 percent independents. The rest are registered with other parties.

Ehrlich has already declared her candidacy for 2014 and had raised nearly $154,000 as of July. Young's wife has told local media that she would run for the seat if Ehrlich's name is on the ballot.

Alex Sink, a prominent Democrat who ran in 2010 for governor against Rick Scott, has also expressed interest in Young's seat.