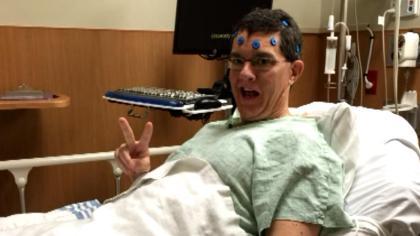 A 46-year-old man from Colorado is beating the odds. He once feared he had just weeks to live, but now, five years later, the melanoma that spread to his brain is in remission.

"I feel great, you know. Normal as — normal, whatever normal is," Leland Fay told CBS Denver.

For Fay, normal is good enough. He coaches his kids, hikes the high country, and keeps working despite a devastating diagnosis.

"I had a small bump on my head," Fay told CBS 4 Health Specialist Kathy Walsh.

Discovered in 2011, it was aggressive melanoma. Part of his scalp and lymph nodes in his neck were removed. Fay had experimental treatment in California, but the cancer spread.

"Stomach, liver and lungs and then, two months later, brain," he said.

In all, 98 tumors were growing in Fay's brain.

"Typically with three to five is 'we're going to send you to hospice and it's six weeks to live'," Fay said.

But neurosurgeon Dr. Robert Breeze at the University of Colorado Hospital had a plan of attack.

"Our first treatment was to use stereotactic radiosurgery," said Breeze.

That was Gamma Knife treatments at Rocky Mountain Gamma Knife Center. Without any incisions, gamma radiation beams target each tumor.

Fay had seven hours-long treatments and one tumor was later surgically removed. His latest brain scan is clean.

"With melanoma it's hard to ever say that someone's cancer free," said Breeze. "He certainly has beaten the average."

In addition to having Gamma Knife treatment, Fay had surgeries to remove tumors in other places and is on his third immune therapy. He said he is grateful for the continued advancements in cancer treatments, as well as the power of positivity and some prayer.