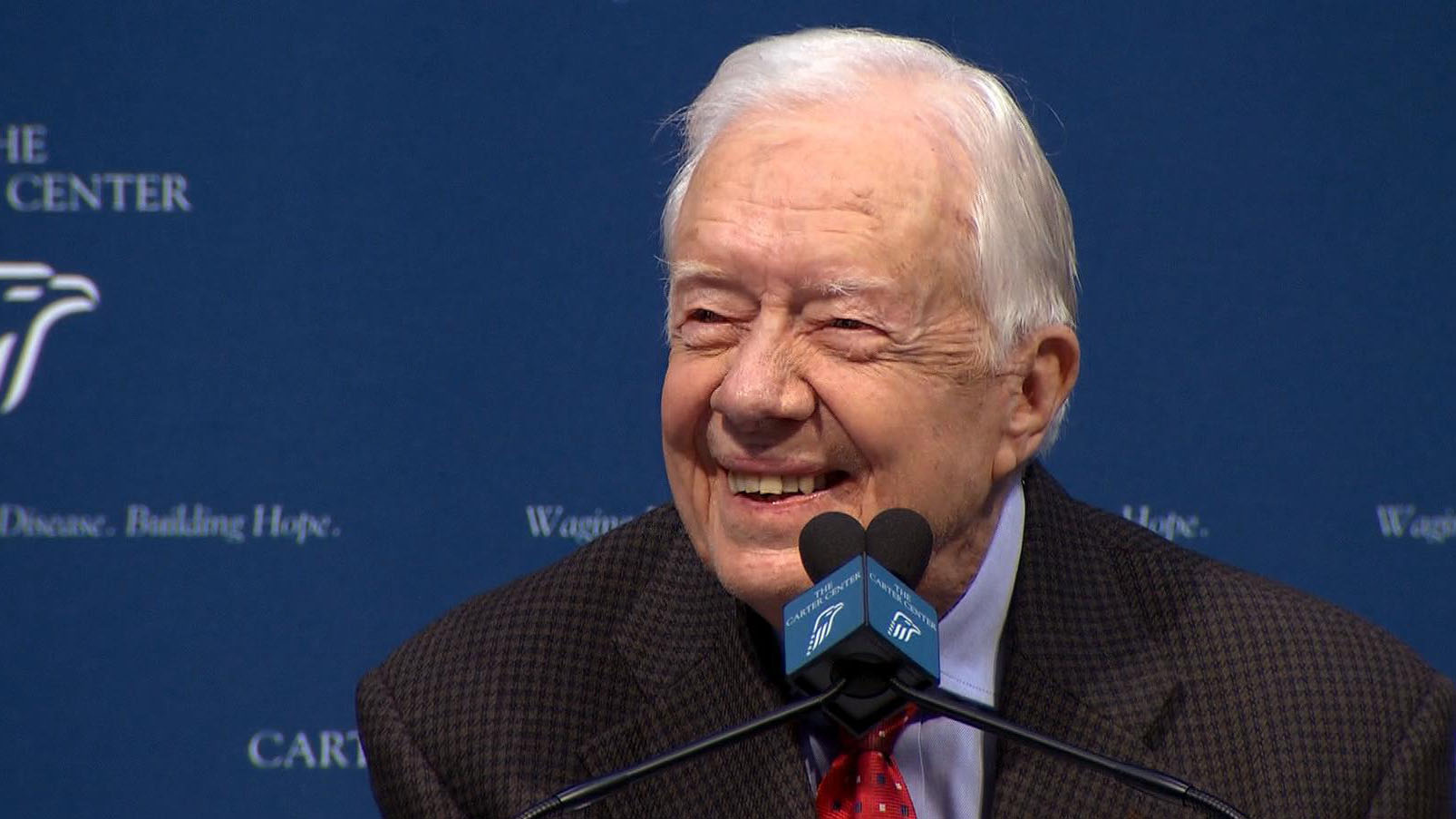 Jimmy Carter shared happy news yesterday when he told his Sunday School class that recent brain scans show he is clear of cancer.

"My most recent MRI brain scan did not reveal any signs of the original cancer spots nor any new ones," the former president said to his class at Maranatha Baptist Church in his hometown of Plains, Georgia. Carter, now 91, was diagnosed over the summer with melanoma that had spread to his liver and brain.

Whether Carter's cancer is gone for good, no one knows for sure, but experts say the fact that the metastatic melanoma is no longer detectable and that no new tumors have appeared are good signs, and may offer hope for others who may benefit from new immunotherapy treatments like the one used to fight Carter's cancer.

Carter was first diagnosed in August after a mass was removed from his liver. Then doctors discovered that the cancer had also spread to his brain -- four small spots.

Most cases of melanoma begin as a skin cancer, but Carter said this past summer that his doctors had not determined where his cancer originated.

He underwent liver surgery, received radiation therapy on his brain and then began immunotherapy, said Shepard, a medical oncologist.

Shepard said there are about 200,000 cases of metastatic melanoma in the U.S. every year and that it's the most dangerous type of skin cancer. Approximately 10,000 deaths occur from it annually.

"Not uncommonly, it can spread to organs like the liver and the brain," said Shepard.

In a statement, Carter talked about his ongoing medical plan, "I will continue to receive regular 3-week immunotherapy treatments of pembrolizumab." The drug goes by the name Keytruda commercially.

Shepard said the recently-approved drug and others like it are important.

"Prior to these immunotherapies, we didn't have good treatment options for melanoma that was metastatic, that had spread to other organs," Shepard said.

Normally, the immune system can recognize things that shouldn't be there, like a bacteria or virus, Shepard explained. "But you can have a very large tumor that the immune system seemingly ignores, even though it's an abnormal collection of cells," he said.

These tumors can express proteins on their surfaces that essentially can hide the mass from the immune system so that it can't attack it and get rid of it. Newer immunotherapy drugs are engineered to "unmask" the tumors by interacting with those proteins to make them visible to the immune system so it can fight the offending cancer.

"While giving this therapy, they were able to prevent regrowth of existing tumors and growth of new tumors," said Shepard.

Carter's family is no stranger to cancer; three siblings and his father died from pancreatic cancer.

While Carter's clean bill of health is very good news, Shepard said it's too early to call it "a cure."

"The way we think about this is that the drug has kept the disease under control and it has been well-tolerated," he said.

"For someone who is 90 years old, getting these sorts of therapies and doing so well, it's pretty amazing," said Shepard.

Oncologists are concerned about giving chemotherapy drugs to older cancer patients because of the toxicity issues, which can cause nausea and fatigue.

Pembrolizumab, by comparison, does not typically cause side effects. When it does, they can include inflammatory side effects in the intestines and flu-like symptoms, Shepard said.

Shepard said immunotherapy treatments and cancer can be viewed the way you'd treat a patient with a chronic illness.

Shepard is not involved in Carter's treatment, but he said his doctors will probably continue with his treatment another two or three months and then scan again to see if it is still controlling his disease.

Carter, the 39th president of the United States, served between 1977 and 1981 and is now the nation's second-oldest living president. (George H. W. Bush, 91, is a few months older.) After leaving the White House, he established the Carter Center and has traveled the world working on issues like health care and global democracy. He recently finished a book tour promoting his latest book, "A Full Life: Reflections at 90."

The medication Carter is taking is currently FDA-approved for use in certain lung cancers. There are ongoing trials in a number of other diseases, too.

"This is good science -- realizing that the therapies we have available are not optimal and creatively looking for new ways to treat cancers," said Shepard.

He said Carter's news underlies the importance of the need for continued basic scientific research and clinical trials.

"You can actually see that it can have benefits -- this particular case with the former president puts a face to this -- and how people can really benefit from this," Shepard said

Making the drugs affordable needs to be addressed, too, he added. "This therapy costs tens of thousands of dollars a month."