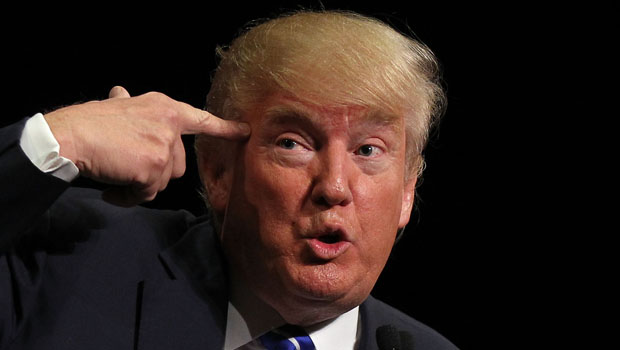 Two polls of Iowa Republicans this past week show Ben Carson pulling ahead of Donald Trump. All the same, Trump looms large in the thoughts of our contributor Faith Salie:

First off, apologies, because I'm about to feed the monster and talk about Donald Trump. Not about his politics, but his popularity, which may be waning but is still sizable and worth examining.

The Donald seems to be riding a wave of support from people who denounce "political correctness." This means they cheer his insults:

I don't really want to repeat his cruel gems of late, but this man who's running for the most esteemed position in America has very publicly disparaged the appearances of (just for starters) Rosie O'Donnell, Kim Novak, Angelina Jolie, Halle Berry and Heidi Klum.

Most recently, of course, he said of Republican presidential hopeful Carly Fiorina:

"Look at that face! Would anyone vote for that? Can you imagine that, the face of our next president?! I mean, she's a woman, and I'm not s'posedta say bad things, but really, folks, come on. Are we serious?"

Fiorina offered an incommensurately classy response: "I think women all over this country heard very clearly what Mr. Trump said."

This from a man who says, "I will be so good to women. I cherish women. I will work hard to protect women."

Perhaps he should protect them from his own nasty words.

Donald Trump, who surely has lots of high-stakes issues on which to focus, is consumed with the appearance of women. Making fun of people's looks is something that children do -- MEAN children -- and in fact, linguists have determined that Trump actually speaks like a 3rd grader.

Really, this is bigger than Trump and his ego. (Yes, there IS something bigger than Trump's ego.) Because it's about what we all agree is acceptable on the American political and cultural stage.

It's one thing to decry and defy political correctness in the name of efficiently achieving clarity or revealing an honest truth. But it's quite another thing entirely to support name-calling and nastiness.

People who champion Trump say they don't want politics-as-usual. But "politic" is also an adjective. It means "tactful and diplomatic." It's necessary for an elected official to be politic.

Is this a man we want representing and "cherishing" us? His language makes him The Ugly American.