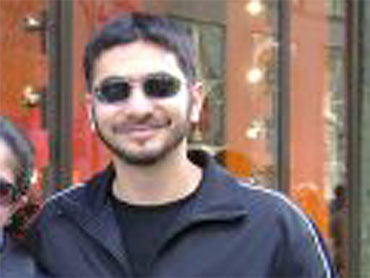 A Pakistani-born U.S. citizen was hauled off a plane about to fly to the Middle East and arrested in the failed attempt to explode a bomb-laden SUV in Times Square, authorities said Tuesday. One official said he claimed to have acted alone.

Faisal Shahzad was on board a Dubai-bound flight that was taxiing away from the gate at Kennedy Airport when the plane was stopped and FBI agents and New York Police Department detectives took him into custody late Monday, law enforcement officials said.

U.S. government officials, speaking on condition of anonymity, said Shahzad made his last-minute flight reservation on the way to the airport and paid for his ticket in cash. The airline flagged the reservation and alerted authorities, reports CBS News national security correspondent Bob Orr.

Police sources tell CBS News a fully loaded 9mm gun was found in Shahzad's car at the airport, along with extra clips of ammunition.

U.S. authorities "will not rest until we have brought everyone responsible to justice," Attorney Eric Holder said early Tuesday, suggesting additional suspects are being sought.

In Pakistan, intelligence officials said at least one man has been detained in the southern city of Karachi in connection with the Times Square case: a man named Tauseef who was a friend of Shahzad. He did not say when the man was picked up.

According to CBS News' Maria Usman, a total of four to eight people are being held after a series of law enforcement raids.

President Barack Obama said "hundreds of lives" may have been saved Saturday night by the quick action of ordinary citizens and law enforcement authorities who saw the smoking SUV parked in Times Square.

Shahzad, 30, is a naturalized U.S. citizen and had recently returned from a five-month trip to Pakistan, where he had a wife, according to law enforcement officials who spoke to The Associated Press on condition of anonymity because of the sensitivity of the investigation into the failed car bombing.

Officials familiar with the probe say investigators plan to go through Shahzad's citizenship application line by line to see if he lied about anything. He became a citizen in Hartford, Conn.

Investigators hadn't established an immediate connection to the Pakistani Taliban — which had claimed responsibility for the botched bombing in three videos — or any foreign terrorist groups, a law enforcement official told the AP.

"He's claimed to have acted alone, but these are things that have to be investigated," a law enforcement official told the Associated Press.

CBS News' Farhan Bokhari reports that, if Shahzad does have solid links to terror groups in Pakistan's most populous province, as his name seems to suggest, that will present the American-allied government with some difficult choices as to whether they can afford a new front in their fight against extremists.

Shahzad has been answering questions for investigators, the official said, declining to say what information was provided. It's unclear if those conversations will continue.

A Pakistani TV station reported that Shahzad spent time in Karachi and visited the northwestern city of Peshawar during his stay in Pakistan. Peshawar is a gateway for foreigners seeking to travel into nearby tribal regions, where militant groups have long had sanctuary.

In Washington, Pakistani Embassy spokesman Nadeem Haider Kiani said it's too soon to tell what motivated the bomber. Asked whether there were ties to foreign terrorist groups, Kiani said early indications suggest the bomber was "a disturbed individual."

Another law enforcement official said Shahzad was not known to the U.S. intelligence community before the failed bombing attempt, in which authorities found a crude bomb of gasoline, propane and fireworks in a 1993 Nissan Pathfinder parked on a bustling street in Times Square.

A source told Orr the FBI and New York police "were on to this guy early." The break in the case apparently came from the communications surrounding the sale of the SUV.

Shahzad Tried to Return to Pakistan

Law enforcement officials say Shahzad paid $1,300 cash three weeks ago for the Pathfinder, going first for a test-drive in a mall and offering less than the $1,800 advertised price. Peggy Colas, 19, of Bridgeport, sold the car to Shahzad after he answered an Internet ad, law enforcement officials said. The officials spoke to the AP on condition of anonymity because of the sensitive nature of the case.

The vehicle identification number had been removed from the Pathfinder's dashboard, but it was stamped on the engine, and investigators used it to find the owner of record, who told them a stranger bought it. As the SUV buyer came into focus, investigators backed off other leads.

The source tells CBS News that Shahzad was thought to have been at his apartment in Connecticut Monday night when details began leaking in the media that the FBI was looking for a Pakistani American. This apparently unnerved him and prompted him to try and run.

The U.S. attorney's office in Manhattan was handling the case and said Shahzad would appear in court later Tuesday, but the charges were not made public. FBI agents searched the home at a known address for Shahzad in Bridgeport, Conn., early Tuesday, said agent Kimberly Mertz, who wouldn't answer questions about the search.

Authorities removed filled plastic bags from the house in a mixed-race, working-class neighborhood of multifamily homes in Connecticut's largest city. A bomb squad came and went without entering as local police and FBI agents gathered in the cordoned-off street. FBI agents appeared to have found fireworks in the driveway that they were marking off as evidence.

Shahzad was being held in New York and couldn't be contacted. A phone number at a listed address for Shahzad in Shelton, Conn., wasn't in service.

He used to live in a two-story grayish-brown colonial with a sloping yard in a working-class neighborhood in Shelton. The home looked as if it had been unoccupied for a while, with grass growing in the driveway and bags of garbage lying about.

A neighbor in Bridgeport described him as quiet.

"Nobody ever had a problem with him," said Dawn Sampson, 34, who lives across the street from Shahzad's third-floor apartment. She said he had remodeled it and had put on the market to rent for $1,200, a fee she thought was much too high.

Watch: How Faisal Shahzad was Caught

It's unclear whether investigators have told Shahzad he has the right to remain silent and have a lawyer. Since the failed Christmas Day airline bombing, Republicans have rallied against that practice in terrorism cases.

So-called Miranda warnings have been commonplace in police investigations for more than four decades. And there is not a clearly defined way around them that doesn't risk undermining the criminal case.

Republicans are already calling for the FBI not to read Shahzad his rights.

"Obviously that would be a serious mistake until all the information is gathered," Sen. John McCain, R-Ariz., said on the "Imus in the Morning Show."

The SUV was parked near a theater where the musical "The Lion King" was being performed. The bomb inside it had cheap-looking alarm clocks connected to a 16-ounce can filled with fireworks, which were apparently intended to detonate gas cans and set off propane tanks in a chain reaction "to cause mayhem, to create casualties," police Commissioner Raymond Kelly said.

A metal rifle cabinet in the SUV's cargo area was packed with fertilizer, but NYPD bomb experts believe it was not a type volatile enough to explode like the ammonium nitrate grade fertilizer used in previous terrorist bombings.

Police said the SUV bomb could have produced "a significant fireball" and sprayed shrapnel with enough force to kill pedestrians and knock out windows.

A vendor alerted a police officer to the parked SUV, which was smoking. Times Square, clogged with tourists on a warm evening, was shut down for 10 hours. A bomb squad dismantled the bomb and no one was hurt.

"It's clear that the intent behind this terrorist act was to kill Americans," he said.

Mayor Michael Bloomberg said the arrest should not be as used as an excuse for anti-Muslim actions. "We will not tolerate any bias or backlash against Pakistani or Muslim New Yorkers," he said.

Authorities did not address Shahzad's plans in Dubai. The airport there is the Middle East's busiest and is a major transit point for passengers traveling between the West and much of Asia, particularly India and Pakistan.

Dubai-based Emirates airline said three passengers were pulled from Flight EK202, which was delayed for about seven hours. The airline did not identify Shahzad by name or name the other two passengers.

The aircraft and passengers were then screened again before taking off Tuesday morning, and the airline is "cooperating with the local authorities," Emirates said in a statement e-mailed to the AP. The other two passengers who had been removed were allowed to get back aboard the flight, the airline said.

Pakistan Interior Minister Rehman Malik told the AP that authorities had not been formally asked for help in the investigation but would cooperate if asked.

More than a dozen people with U.S. citizenship or residency, like Shahzad, have been accused in the past two years of supporting, attempting or carrying out attacks on U.S. soil, illustrating the threat of violent extremism from within the U.S.

Among them are Army Maj. Nidal Hasan, a U.S.-born Army psychiatrist of Palestinian descent, charged with fatally shooting 13 people last year at Fort Hood, Texas; Najibullah Zazi, a Denver-area airport shuttle driver who pleaded guilty in February in a plot to bomb New York subways; and a Pennsylvania woman who authorities say became radicalized online as "Jihad Jane" and plotted to kill a Swedish artist whose work offended Muslims.