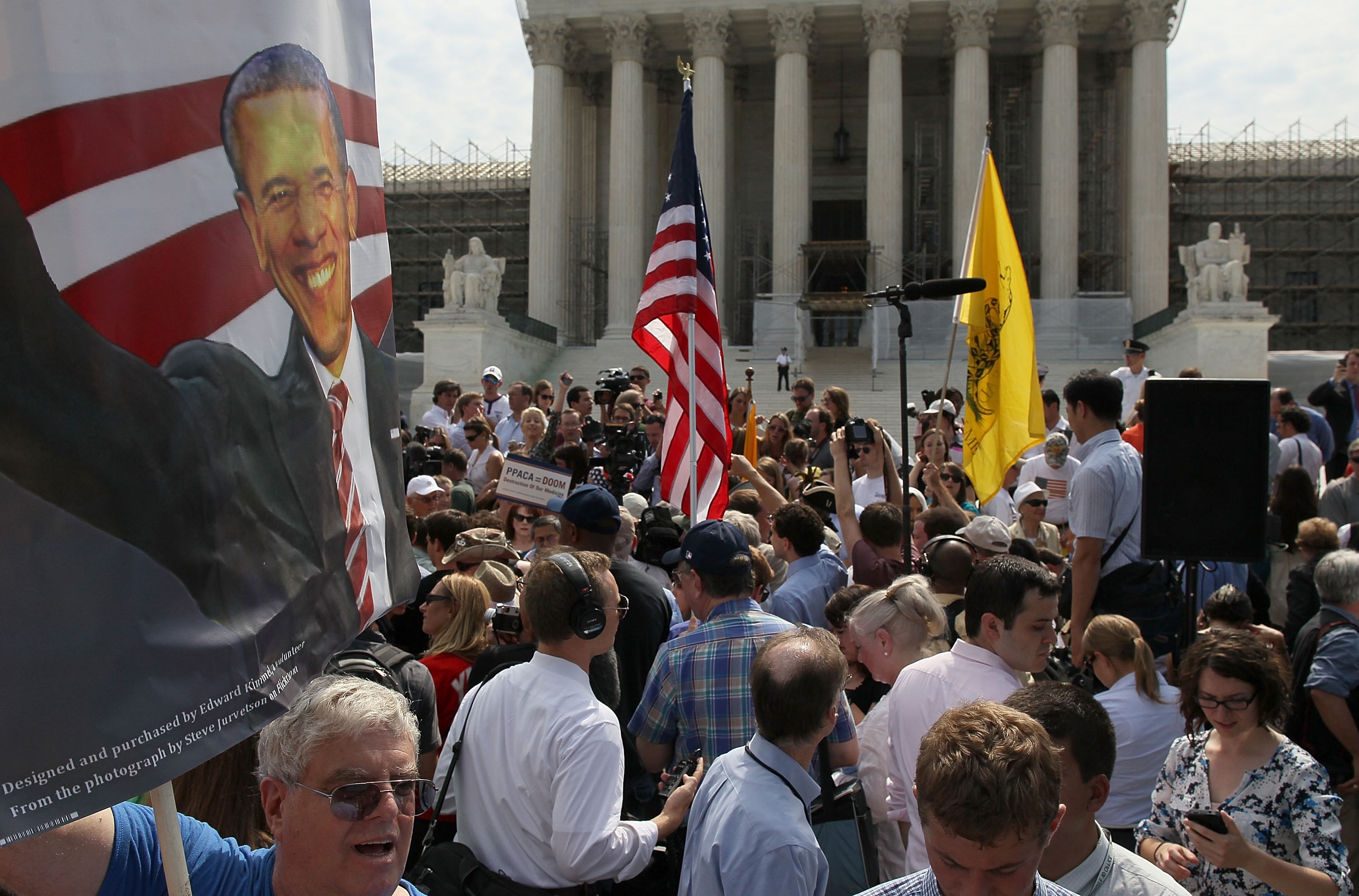 By upholding the individual mandate -- the requirement for all Americans to acquire health insurance -- the court kept what many described as the "heart" of the law. The decision creates some certainty surrounding federal health care policy, allowing federal and state rulemakers to implement the law.

The decision was 5 - 4, with Chief Justice John Roberts siding with the liberal justices and writing the majority opinion. The court ruled that the federal government does have the power to require all Americans to acquire insurance if the "fine" imposed on those who don't is considered a tax.

"I see this as a total victory for the Affordable Care Act," said Tim Jost, a consumer advocate and professor of health law at Washington and Lee University. Additionally, he said, the ruling is "a signal to the states that it's time to get going." The states have until November 16 to turn in blueprints for building their respective state health exchange systems.

The court found fault with one major provision of the law, which would have expanded Medicaid coverage. Currently, Medicaid is a joint federal-state program that provides health care to certain poor Americans, such as children and the elderly. In 2014, the Affordable Care Act would have opened up Medicaid to anyone with an income under 138 percent of the federal poverty line.

Several states argued the expansion of the program would have placed an undue burden on the states, and the court agreed, writing in its opinion that the provision was like a "gun to the head of the states." If a state had chosen not to expand the program as the law required, it would have had to opt out of Medicaid completely -- something no state could afford to do. The court ruled that the federal government's ability to revoke a state's Medicaid funding is limited -- thus, the states can opt into the expansion, but they don't have to.

Jost, the Washington and Lee University professor, said the Medicaid ruling "could be read as imposing a significant new limitation on the power of the federal government to engage in cooperative programs with the states."

It may be that the ruling only applies to Medicaid, he said, or it could apply to other joint federal-state programs like an education program or transportation funding. In that case, the federal government could be limited in what it demands from states before giving them funding.

While several states objected to the Medicaid expansion, Jost and other experts said they'd expect essentially every state to participate in the program since the federal government is covering the vast majority of the cost (and all of the cost initially).

"Frankly, I don't think any governor in his right mind would turn down hundreds of millions of dollars to help citizens in their state," Jost said.

The high court's move hardly ends the political controversy surrounding the law; if anything, the decision to uphold most of the law is sure to renew calls for lawmakers to repeal the Affordable Care Act legislatively.

In response the decision, Republican presidential candidate Mitt Romney said Thursday that while the court found the law constitutional, "What they did not do is say that Obamacare is good law. Obamacare was bad law yesterday, it's bad law today."

The Republican candidate added, "What the court did not do in its last day in session, I will do on my first day" if elected president. He asked voters to join him to "defeat the liberal agenda that makes government too big."

President Obama today said the court's decision reaffirmed the principle that "here in America, in the wealthiest nation on Earth, no illness or accident should lead to a family's financial ruin."

He ran through the law's benefits, such as the provision barring insurers from discriminating against Americans with pre-existing conditions. Several of those provisions will go into effect years from now, after the states have set up their health care "exchanges" or state marketplaces for health insurance.

"When we look back five years from now, 10 years from now... we'll be better off because we had the courage to pass this law," Mr. Obama said.

The president acknowledged that the individual mandate remains a divisive issue, but he pointed out, "This idea has enjoyed support from both parties, including the current Republican nominee for president."

He added, "It should be pretty clear by now didn't do this because it was good politics...I did it because I believed it was good for the American people."

House Majority Leader Eric Cantor in a statement called the court's decision a "crushing blow" to patients and promised that the House would once again vote to repeal the law. "During the week of July 9th, the House will once again repeal ObamaCare, clearing the way for patient-centered reforms that lower costs and increase choice," he said.

In a written statement, Senate Republican leader Mitch McConnell said, "Today's decision makes one thing clear: Congress must act to repeal this misguided law. Obamacare has not only limited choices and increased health care costs for American families, it has made it harder for American businesses to hire."

Senate Majority Leader Harry Reid said on the Senate floor, "Our Supreme Court has spoken. The matter is settled. It's time for Republicans to stop fighting yesterday's battles."

The ruling inspired emotional responses from both liberals and conservatives across the country, illustrating how politically explosive the issue is.

Upon learning the news, House Democratic Leader Nancy Pelosi first left messages for the president and the vice president, according to a top Pelosi aide. Then she called Vicki Kennedy, the wife of the late senator and health care reform champion Ted Kennedy. "Now, Teddy can rest," Pelosi told Kennedy.

The Democratic leader -- wearing her lucky purple pumps -- called her husband after that and then celebrated with her staff.

On the steps of the Supreme Court, before it was clear what the ruling was, Tea Partiers and other opponents of the law cheered and waved signs, initially thinking the law was struck down. The cheered, "Constitution wins!" A few minutes later, after the news was cleared up, they started chanting, "this is not over," and "repeal it now."

Supporters of the health care law, meanwhile, danced in front of the court and shouted, "Yes we can! Yes we can!"

Meka Sales, a public health professional from Charlotte, N.C., told CBS News that at a meeting of the American Public Health Association there, people were crying tears of happiness when they heard the news.

"We were totally unprepared for such a favorable decision. I think tears were on deck for a disappointment but what an incredible surprise," she said. "The room was filled with complete joy and a sense of justice for those that will have access to health care in the future. "