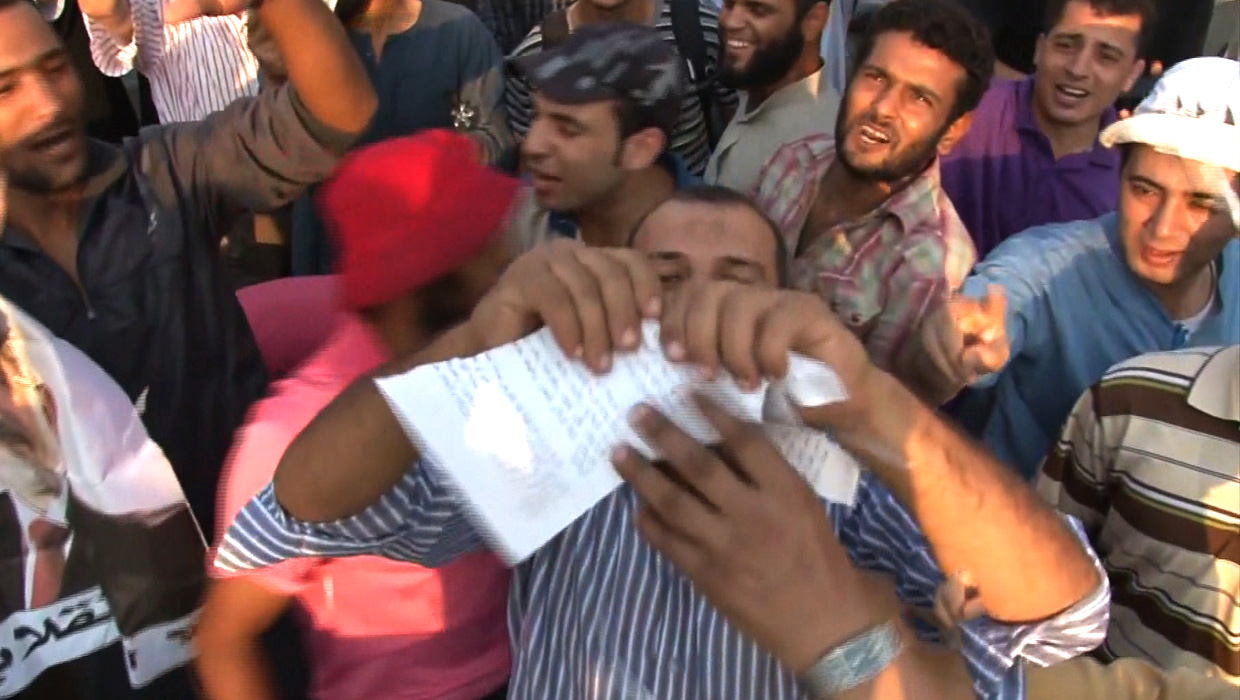 CAIRO Egypt's highest security body warned Sunday that the clock is ticking for a peaceful end to the standoff over sit-ins by supporters of ousted President Mohammed Morsi, suggesting that authorities will break up the protests unless mediation efforts produce results soon.

More than a month after the military overthrew Morsi, thousands of the Islamist leader's supporters remain camped out in two main crossroads in Cairodemanding his reinstatement. Egypt's military-backed interim leadership has issued a string of warnings for them to disperse or security forces will move in, setting the stage for a potential showdown.

CBS News correspondent Clarissa Ward reported that helicopters had dropped thousands of leaflets onto the crowds of one of the crowds in Cairo. The fliers were from the interior ministry and urged the protesters to go home, promising them a safe exit and saying they understood they have been brainwashed.

But the crowd at the protest camp appeared to be growing, not diminishing, Ward reports. Men ripped the leaflets in front of news cameras, throwing the pieces of paper into the air. The fliers didn't give a deadline by which the protesters have to leave, but it's fair to say many Egyptians are increasingly impatient and that the window for dialogue is rapidly closing.

Also Sunday, authorities announced that a court case accusing the spiritual leader of the Muslim Brotherhood and his powerful deputy of inciting violence will start Aug. 25. Morsi hails from the Brotherhood.

Senators John McCain, R-Ariz., and Lindsay Graham, R-S.C., will arrive in Egypt Monday in an attempt to broker a settlement between Morsi's supporters and the military-back government. They hope to avoid a repeat of violence that has killed more than 250 people -- at least 130 of whom were pro-Morsi protesters shot dead by security forces - since the July 3 military coup.

U.S. Deputy Secretary of State William Burns has also spoken with Egyptian military officials. He extended his visit to Cairo by one day so he could meet military leader Gen. Abdel-Fatah el-Sissi and the country's prime minister on Sunday, an Egyptian Foreign Ministry official said.

While diplomats raced to find a compromise, the Egyptian interim government signaled that its patience with the pro-Morsi sit-ins was running out.

The group called on the protesters to abandon the sit-ins and join the political road map announced the day of Morsi's ouster.

With the Islamist-backed constitution adopted last year suspended and the legislature dominated by Morsi's supporters dissolved, the road map provides for a new or an amended constitution to be put to a national referendum later this year and presidential and parliamentary elections early in 2014.

In a move that underlined the government's resolve in dealing with the protests -- now in their second month -- Egyptian authorities denied Yemen's Nobel Peace Prize winner Tawakkul Karman entry into Egypt after she landed at Cairo airport on Sunday.

Karman, the first Arab woman to win the Nobel Peace prize, has stated her opposition to Egypt's military coup and said she had intended to join the pro-Morsi sit-in protests. She won the prize for her role in protests in Yemen in 2011 that forced longtime dictator Ali Abdullah Saleh from office.

Airport officials did not say why she was denied entry, only that her name had been placed by various security agencies on an airport stop list. The officials spoke on condition of anonymity because they were not authorized to brief the media.

The decision to bar Karman suggests authorities wanted to deny the pro-Morsi camp the publicity she would have generated. Morsi supporters strongly condemned Karman's barring, claiming it was evidence of the "resurrection" of the police state under autocrat Hosni Mubarak, toppled in a 2011 popular uprising.

Meanwhile, U.S. Deputy Secretary of State William Burns extended his visit to Cairo by two days so he could have further talks with Egyptian leaders on Sunday and Monday. He met Defense Minister Gen. Abdel-Fatah el-Sissi, who led the coup, and the country's prime minister on Sunday.

The State Department said Burns discussed the importance of avoiding violence and fostering an inclusive process "that helps Egypt's ongoing transition succeed" - another clear sign Washington has moved on from Morsi's presidency.

Burns also met for a second time this weekend with an anti-coup delegation that included two Muslim Brotherhood figures. He requested the meetings and urged them to avoid violence, said Nevine Malak, who attended both meetings with Burns as part of the anti-coup delegation.

Malak described Burns' position in the meetings as "neutral" and said delegates told him that the government needs to foster trust for national unity talks to take place. She said this includes reigning in the use of force against pro-Morsi protesters, improving prison conditions for top Islamist political figures detained and ceasing arrests of Islamists, she said.

"The current climate does not build confidence nor lay the groundwork for talks or real reconciliation," Malak told The Associated Press. The delegation insisted that any solutions must be based on the Islamist-drafted constitution, she said.

Other top diplomats in Cairo are the foreign ministers of the United Arab Emirates, which had been at odds with Morsi's government, and Qatar, which maintains close ties to the Brotherhood. European Union special envoy Bernardino Leon was also in Cairo attending the meetings with Burns.

The UAE's diplomat met with Egypt's president and vice president, but Qatar's foreign minister had not held any meetings with government officials by late Sunday, presidency officials said. Burns met separately with the two Arab Gulf ministers while in Cairo, an Egyptian official said.

At the core of discussions is the political future of the Muslim Brotherhood and its Islamist allies.

Morsi has been held at undisclosed locations since July 3. He faces accusations of comprising with the militant Palestinian Hamas group to escape prison in 2011.

Egypt's state news agency said on Sunday that Brotherhood leader Mohammed Badie and his deputy Khairat el-Shater are to stand trial Aug. 25 for complicity and incitement in the killing of eight demonstrators outside the group's Cairo headquarters.

Badie is at still large, while el-Shater is in custody.

The killings took place during the first day of the mass street protests calling for Morsi's ouster. The agency also said that senior Brotherhood figure Rashad Bayoumi will face trial on the same charges. Three others face murder charges in the same case.