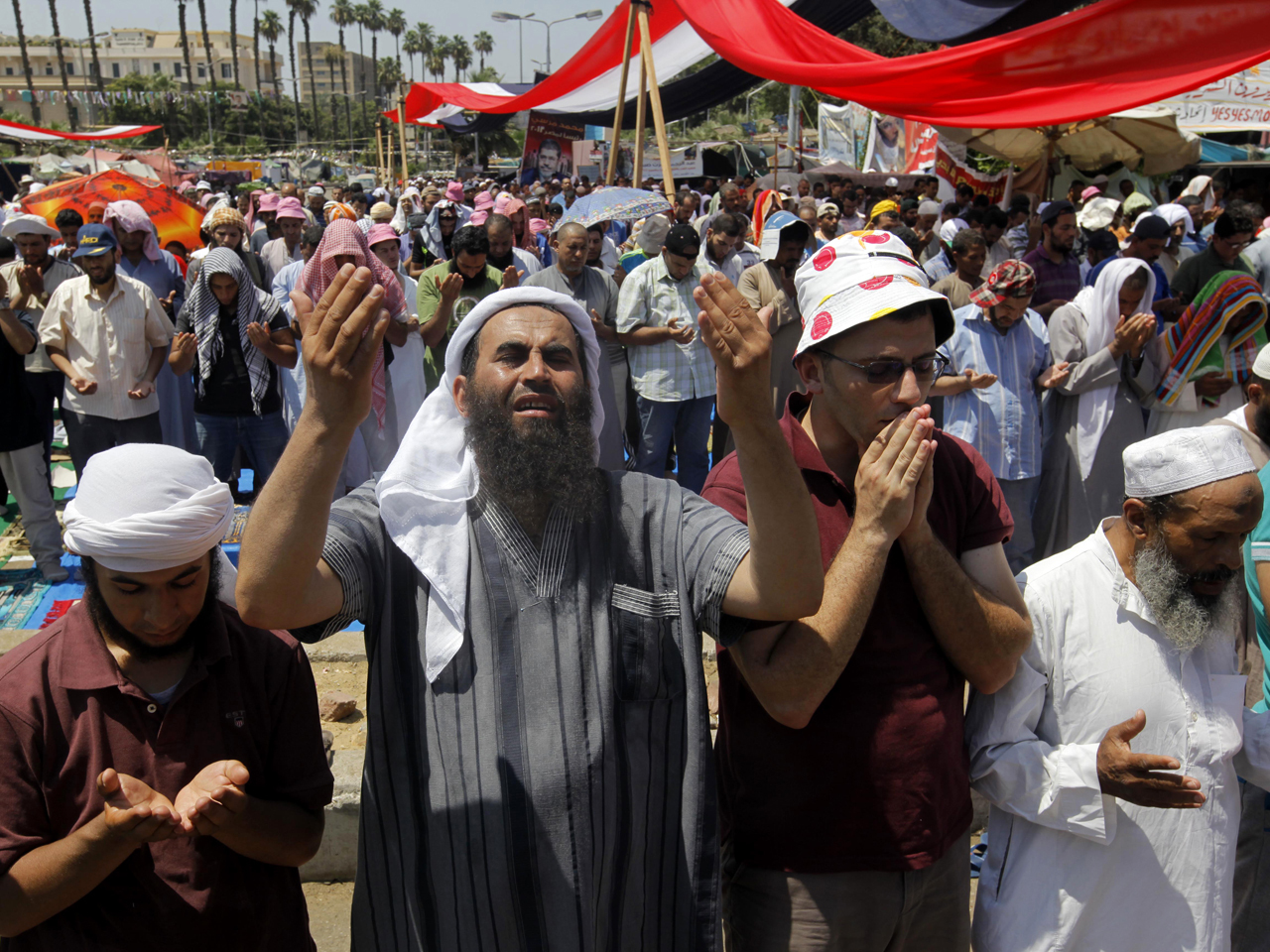 Riot police, meanwhile, fired tear gas at Morsi supporters who rallied in front of a complex housing most of Egypt's private TV stations in southern Cairo, a security official said. A second official told the state news agency that protesters tried to "obstruct traffic in an attempt to affect work at the complex."

State-controlled TV said security forces will establish a cordon within 48 hours around the two main sites where thousands have been camped out since before the president was ousted by the military on July 3.

"This is our rebellion," one man marching in Cairo for Morsi's return told CBS Radio News Friday.

Authorities will let people leave without checking their identities or arresting them, but they will not allow anyone into the protest camps, the report said. It did not elaborate on the next steps, but the government earlier said it will use water cannons and tear gas in dispersing the crowds.

The move represents an attempt by the military-backed interim government to end a political stalemate that has paralyzed Egypt and deeply divided the country. Supporters of Morsi and his Muslim Brotherhood say they will not disperse until he is returned to power as the country's first democratically elected president.

The security cordon around the protest camps raises the possibility of more violence, which has killed more than 130 Morsi supporters and injured hundreds since the military transition. The ouster followed mass protests calling for Morsi to step down after a year in office and accusing him of political failures and putting power in the hands of his Islamist group.

Organizers of the sit-ins outside the Rabaah al-Adawiya Mosque in eastern Cairo and a smaller one near Cairo University's main campus in Giza say the protests are signs of the enduring support for the once-dominant Muslim Brotherhood.

Near the protest camp at the mosque, people armed with sticks and makeshift body armor stood guard behind walls of sandbags, tires and bricks.

Ahmed Madani, 26, was installing a new tent at one of the camp entrances, adding that the facilities will have a kitchen and toilets.

"We are here to show them that we are determined to stay and we won't give up," he said. "Even if I have to die, I will not leave. We are thousands ready to die for our cause."

In addition to the smaller sit-in across town, a new vigil sprung up in the eastern Cairo neighborhood of Heliopolis, near the airport. Protester Hani el-Shafei said thousands set up tents and blocked traffic as a military helicopter flew over it.

Mahmoud Zaqzouq, a Muslim Brotherhood spokesman, said the group wanted to affirm that no place was off-limits to the protesters.

On Thursday, the government offered protection and "safe passage" to those willing to voluntarily leave the camps. It had earlier given orders to police to end what it described as "threat to national security" and sources of "citizens' terrorism."

"To avoid another bloodbath, Egypt's civilian rulers need to ensure the ongoing right of protesters to assemble peacefully, and seek alternatives to a forcible dispersal of the crowds," said Nadim Houry, deputy director of the Middle East and North Africa division of Human Rights Watch.

The Muslim Brotherhood has opposed all measures taken by the military since the transition, including the appointment of an interim president, the suspension the constitution and the disbanding of the Islamist-dominated legislative council. Morsi is being held by the military at an undisclosed location.

In remarks that signaled U.S. support of the military, Secretary of State of John Kerry said he considered the military's move against Morsi as "restoring democracy" to Egypt.

In London, Kerry insisted that all parties in Egypt work toward a peaceful resolution of the crisis. He said the interim government should respect demonstrators and the protesters have a responsibility not to prevent the nation from moving forward.

U.S. Deputy Secretary of State William Burns returned to Cairo for his second visit in nearly two weeks. A Foreign Ministry official said Burns will meet with interim leadership officials and representatives from the Muslim Brotherhood and its allies.