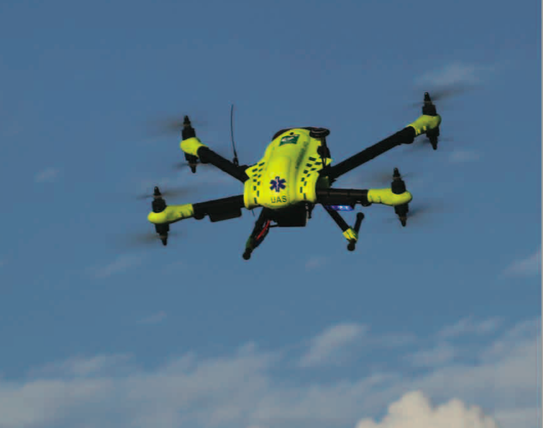 YouTube videos, Amazon delivery, military operations, farming – you name it, drones are being used for everything from aerial photography and delivering packages to conducting surveillance and tending crops. Now the medical world is exploring new ways to use drones, too.

A study by Swedish researchers looked at how drones compare to ambulances at delivering lifesaving defibrillator devices to patients suffering from cardiac arrest and found drones are faster. But the technology has pros and cons, say doctors.

Cardiac arrest happens when the heart suddenly stops beating. Only a little more than one in 10 people survive a cardiac arrest that's occurred outside of a hospital, so the goal of the study was to see how speedy a drone could be at coming to the rescue with an automated external defibrillator (AED), a portable device that sends a shock to the heart to restore a normal rhythm. The idea is that when a bystander calls 911, a drone could be activated by a dispatcher and sent to the location so the bystander could use it to restart the victim's heart.

For the study, researchers from Karolinska Institutet in Stockholm, Sweden, sent a drone on 18 test flights. The drone was outfitted with a GPS, a high-definition camera and an AED, then was launched from a fire station north of Stockholm. It was dispatched to locations where cardiac arrests had actually happened between 2006 and 2014. The typical flight distance was about 2 miles.

The researchers reported in the Journal of the American Medical Association that from dispatch to arrival, the average time for a drone to reach its destination was 5 minutes 21 seconds. The average dispatch time for an ambulance responding to a real emergency was 22 minutes.

"Saving 16 minutes is likely to be clinically important," the researchers wrote.

Drone technology is only going to keep getting better, too, Friedman said.

But how fast a drone makes it to a cardiac arrest patient doesn't necessarily translate to how quickly or effectively an AED will be used, said Dr. Robert Glatter, an emergency physician at Lenox Hill Hospital in New York City.

"Many people without proper knowledge, awareness or training in how to apply an AED may be hesitant to help out, with critical minutes to spare before the brain is compromised," said Glatter.

He added, "I'm certainly in favor of drone technology for delivery of AEDs to help reduce time to deliver lifesaving shocks, but we need larger studies to see if the time saved in doing so actually will save lives."

Hands-only CPR is more effective for the majority of cardiac arrests that happen outside of a hospital, Glatter said, noting that with each minute that slips by without performing CPR, survival rate decreases by 10 percent.

"Sometimes technology can outpace humanity. We don't want to throw tech at bystanders but not have enough people trained to perform CPR or use an AED," he said.

But on the flip side, they might possibly inspire more people to learn CPR and how to use an AED.

The authors wrote that the findings are preliminary and that the limitations to their experiment included the small number of flights over short distances and the advantage of good weather.

In 2016 in the U.S., more than 350,000 cardiac arrests occurred outside of the hospital and only 12 percent of those affected survived, according to the American Heart Association.