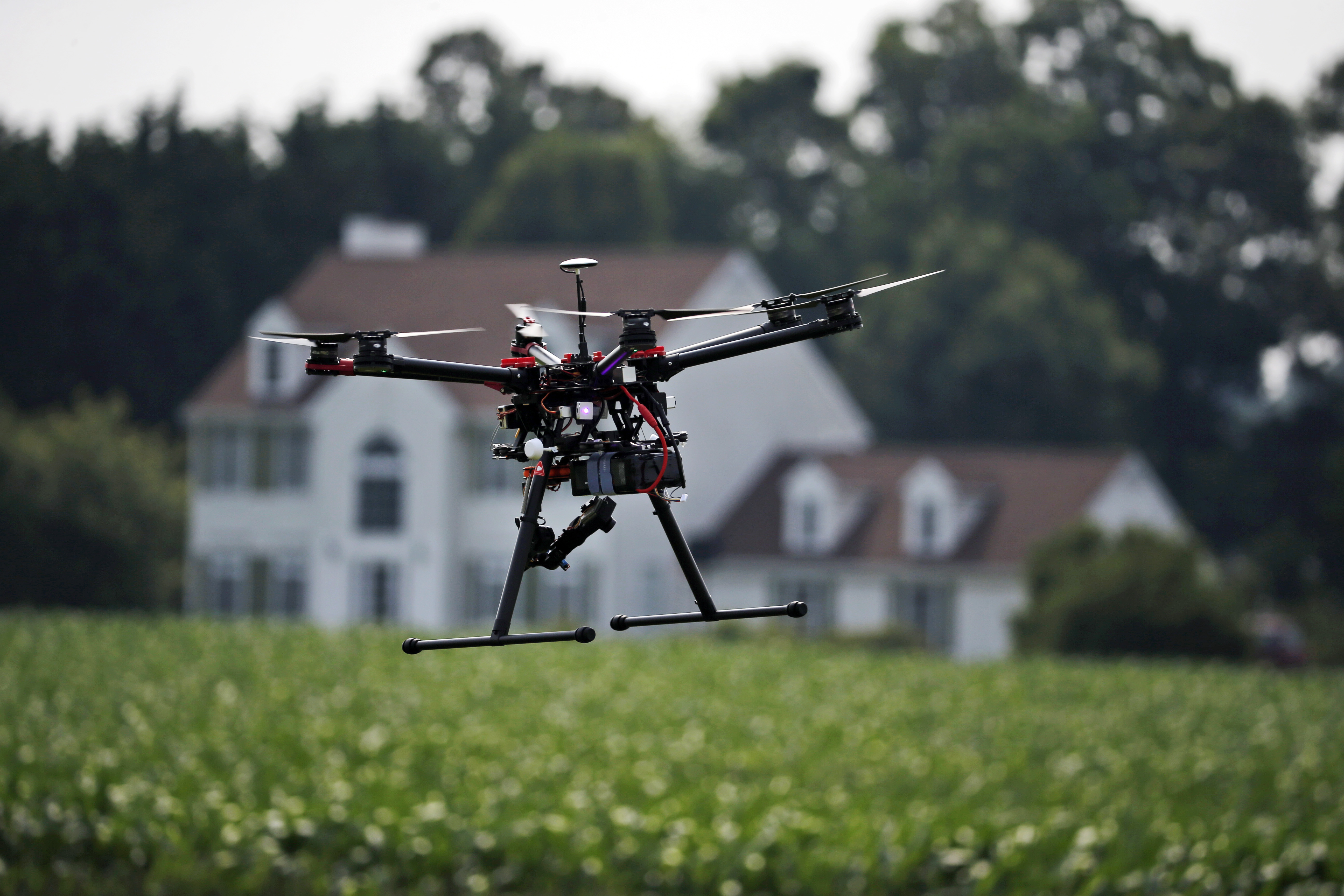 Watching a flying demonstration on Maryland's Eastern Shore, the Missouri farmer envisions using an unmanned aerial vehicle to monitor the irrigation pipes on his farm - a job he now pays three men to do.

"The savings on labor and fuel would just be phenomenal," Geske says, watching as a small white drone hovers over a nearby corn field and transmits detailed pictures of the growing stalks to an iPad.

Nearby, farmer Chip Bowling tries his hand at flying one of the drones. Bowling, president of the National Corn Growers Association, says he would like to buy one for his Maryland farm to help him scout out which individual fields need extra spraying.

Another farmer, Bobby Hutchison, says he is hoping the man he hires weekly to walk his fields and observe his crops gets a drone, to make the process more efficient and accurate.

"I see it very similar to how I saw the computer when it first started," says Hutchison, 64. "It was a no-brainer."

Farmers are eager for the technology.

The small, relatively inexpensive vehicles could replace humans in a variety of ways around large farms: transmitting detailed information about crops to combines and sprayers, directing them very precisely to problem spots and cutting down on the amount of water and chemicals that a farmer needs to use in those areas.

The Association for Unmanned Vehicle Systems International, a trade group, says agriculture could account for 80 percent of all commercial drone use.

Agricultural use of drones is about to take off after being grounded for years by the lack of federal guidelines. The Federal Aviation Administration has approved more than 50 exemptions for farm-related operations since January.

Companies with those exemptions say business has grown, helped by quick advances in the technology.

Bret Chilcott of Kansas-based AgEagle, which sells unmanned aerial vehicles and the software to help operate them, says his company took its first orders last year. Now it has a backlog of several hundred orders. He says the technology has transformed the market during that short period.

"Last year users had to land their aircraft and then take the data to the computer," he says. "Now the data appears on your iPad or hand-held device a few minutes after flight."

That data could be pictures, 3-D images of plants, thermal readings of crops or animals or other observations that a drone could make while in the air. Information that in the past took days to collect - or could not have been collected at all - can be gathered now in minutes or hours and, in some cases, integrated with separate data collected from other high-tech farm machinery.

Chilcott is optimistic that the technology to scout out problem spots so precisely will be transformative because farmers can limit spraying just to those places.

"In five years we won't have to blanket a field with chemicals," he says.

Still, most farmers cannot legally fly the vehicles yet.

The FAA is working on rules that would allow the drones to be used regularly for business while maintaining certain safety and privacy standards. An FAA proposal this year would allow flight of the vehicles as long as they weigh less than 55 pounds, stay within the operator's sight and fly during the daytime, among other restrictions. Operators would have to pass an FAA test of aeronautical knowledge and a Transportation Security Administration background check.

Thomas Haun of North Carolina-based PrecisionHawk, another company with an exemption, says it is unclear what the business will look like eventually. Farmers may hire services that have unmanned aerial vehicles or every farm may get its own drone. Most likely, it will be a combination.

Haun says the proposed rules are appropriate. "It's pretty spot on for where the technology is right now," he says.

Some people have concerns about the guidelines. Pilots of crop dusters and other planes that operate around farms are concerned the rules do not go far enough to ensure safety.

"We can't see them," says Andrew Moore of the National Agricultural Aviation Association. His group advocated for the unmanned vehicles to include tracking systems or lights to help airplanes figure out where they are, but that was not included in the proposal.

The rules could pose some challenges for the eager farmers, too.

Geske may not be able to use drones efficiently to monitor all the irrigation pipes on his 2,100 acre Missouri farm if he has to keep them within sight. He's still interested, though. The men he hires now use a lot of fuel and their trucks tear up his land and roads.

"You can wait forever on advancing technology," Geske says.