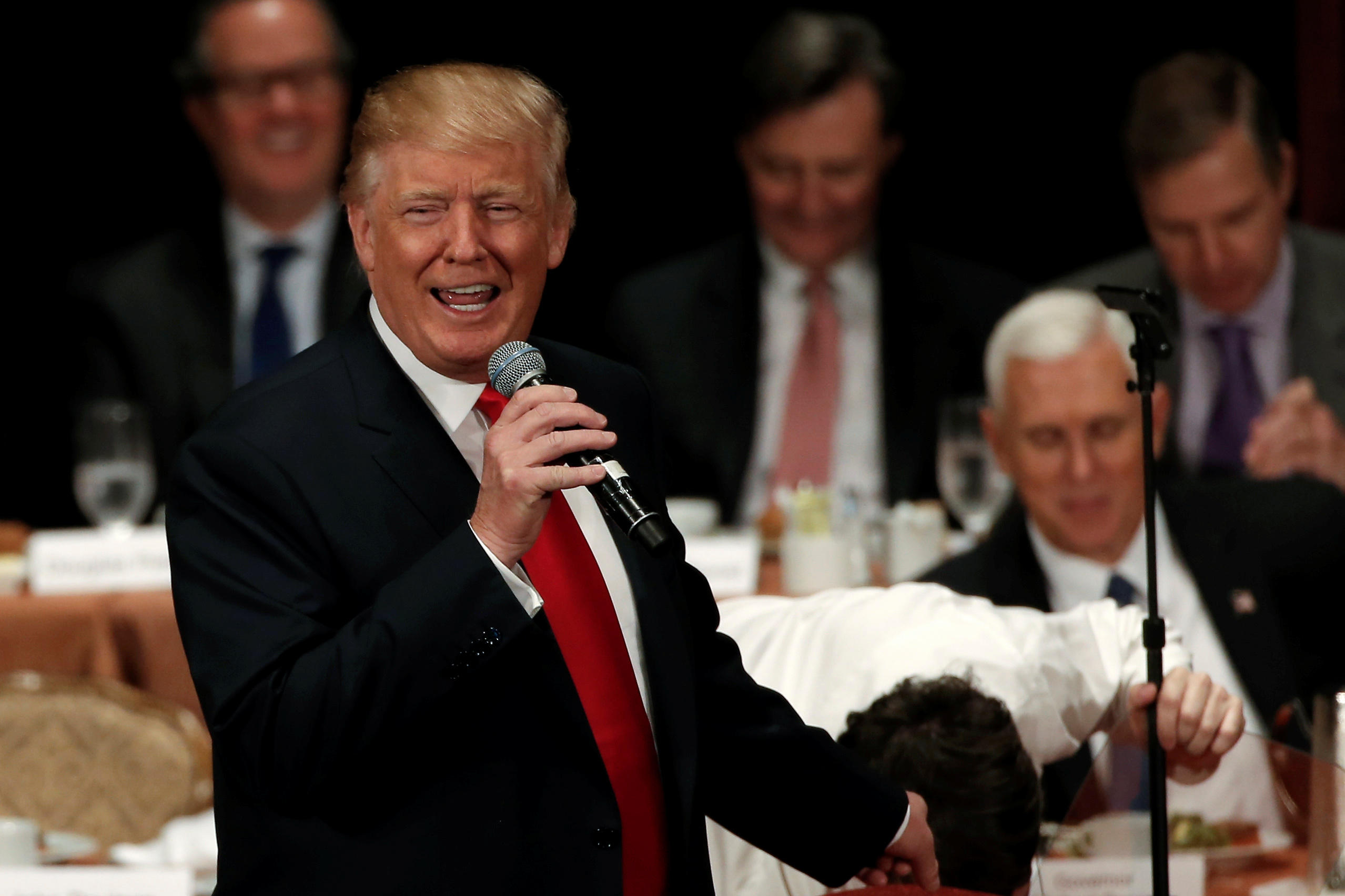 Outlining an updated tax reform plan, Donald Trump addressed the Economic Club of New York Thursday, hawking policies that he promised would lead to economic growth of at least 3.5 percent and the creation of millions of jobs for American workers.

Trump opened his appearance by lamenting the current state of American auto manufacturing, noting his recent visit to Flint, Michigan on Wednesday.

Trump slammed the outsourcing of auto manufacturers as “disgraceful” -- and, he added, “it’s disgraceful that our politicians allow them to get away with it.”

Broadly, Trump, said his economic plan “rejects the cynicism that our labor force will keep declining, that our jobs will keep leaving and that our economy will never grow as it did before.”

“And boy, oh boy did it used to grow,” he said. His campaign claims that his plan would increase GDP growth to 3.5 percent, although during his speech Trump showed greater ambition. “My great economists don’t want me to say this, but I think we can do better than that,” he said, suggesting 4 percent growth was possible.

“Under our plan,” Trump pledged, “the economy will average 25 million new jobs.”

He dismissed Clinton’s economic plan as offering “only more taxes -- and her taxes are unbelievable -- more regulating, more spending, and more wealth redistribution.”

Trump offered some specifics of his tax plan during his speech, reiterating again that individual income tax brackets would be reduced to three: 12 percent, 25 percent, and 33 percent. Trump also proposed a lowered top corporate tax rate of 15 percent -- down from the current 35 percent rate.

To keep companies in the U.S., Trump also included a 10 percent tax on repatriation, and outlined an incentivizing proposal to allow U.S.-based manufacturer to fully expense the cost of their plants and equipment. (Electing to do this, under the Trump plan, would mean companies would give up the ability to deduct interest expense.)

Overall, Trump’s team proposed a $4.4 trillion tax cut (scored as $2.6 trillion “under a dynamic growth model, which is how taxes should be scored,” he said). That economic plan would also include Trump’s recent child care proposals

Elements of this tax plan, which he first introduced in August, constitute a change from his earlier proposals. In June, the Committee for a Responsible Federal Budget released a study that found national debt would inflate to $10 trillion or more over the coming decade​ if Trump’s initial proposals were instituted. At that time, Trump had proposed a top individual income tax rate of 25 percent. In August, he changed his tax plan, increasing the rate for top earners to 33 percent. The current rate for top earners is about 40 percent. The Center on Budget and Policy Priorities (CBPP) noted that Trump, under the current plan, would also allow “very-high-income households” to pay a low rate of 15 percent on what’s known as “pass-through” income, that is, “business income claimed on individual tax returns,” as CBPP defines it. CBPP pointed out that “over two-thirds of all pass-through business income flows to the top 1 percent of tax filers.”

The new cost of the Trump tax plan is, according to Bloomberg Politics, “around $3 trillion over a decade” -- it cited Trump adviser Stephen Moore, and the conservative Tax Foundation, which used dynamic scoring to evaluate his plan, though the Tax Foundation also told Bloomberg that it wouldn’t “vouch for any specific number” until there was a specific plan.

In comparison, Clinton’s agenda, which includes tax increases to pay for federal programs, has been estimated to increase the debt by $250 billion over ten years, according to an analysis by the Committee for a Responsible Federal Budget.

Trump also pledged to cut back on environmental regulations, including a total elimination of the EPA’s Clean Power Plan and loosened emissions standards.

On trade, Trump promised that there would be no Trans Pacific Partnership (TPP), that he would renegotiate the North American Free Trade Agreement NAFTA, and that China would face consequences for currency manipulation.

Trump’s economic team estimated that the savings from trade, energy, and regulation reforms would save about $1.8 trillion.

The GOP nominee also addressed what he called the “Penny Plan,” named for the idea that “if we save just one penny of each federal dollar spent on non-defense, and non-entitlement programs, we can save almost $1 trillion over the next decade.” Trump said the remaining cost of his economic plan -- $800 billion -- would be made up through “simple, common sense reforms,” though the GOP nominee also promised that the cuts would not touch defense or entitlement spending.