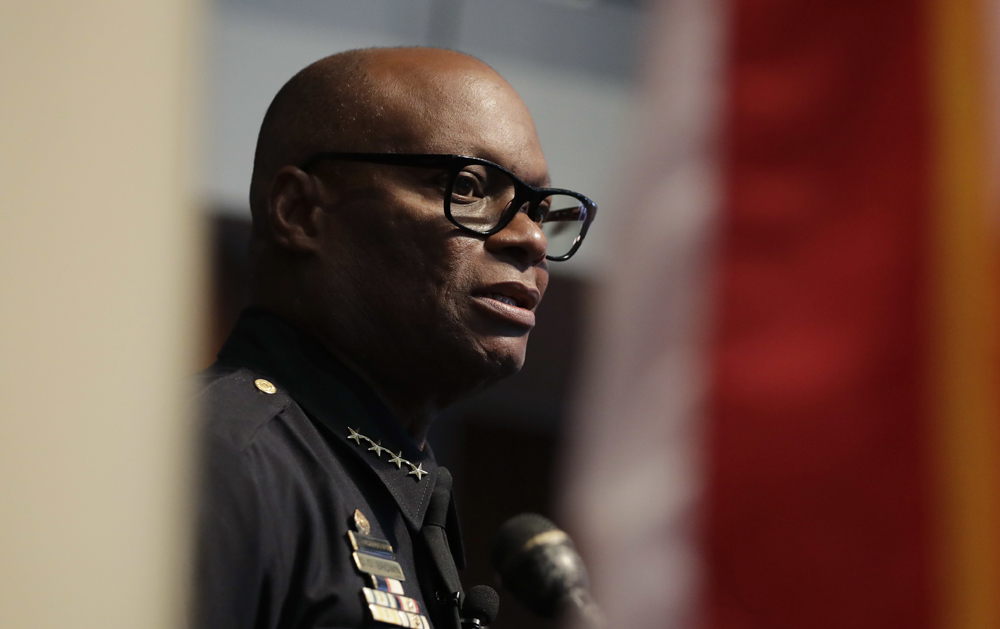 Speaking to the Dallas Observer in February, Dallas Police Chief David Brown said he'd seen "almost every tragedy you can imagine." The haunting words came months before the shooting at a crowded public protest of recent police shootings that left five officers dead and nine officers and two others wounded Thursday.

Brown, who describes himself as an "old school cop" and "third generation Dallas," is no stranger to violence. Brown lost his partner in the line of duty and his brother to drug violence, reports the Dallas Morning News. And in 2010, just weeks into his tenure as chief, his mentally ill 27-year-old son was fatally shot by police after killing a bystander and an officer, the paper reports.

But Brown told the Observer he doesn't believe his personal strife makes him a better police officer - rather, his desire to improve his community made him want to be a cop.

Born and raised in Dallas, Brown said he graduated high school in 1979 with a full ride to the University of Texas at Austin. But returning home during the summer in the early 1980s, he said he saw his neighborhood deteriorate amid the crack-cocaine epidemic rampant at the time.

"It broke my heart," Brown said at a press conference Monday. "It changed what I wanted to do."

Wanting to make a difference at home, Brown said he left college during his senior year in 1983 and applied to be a Dallas police officer. By coincidence, he said, his first police beat was in his old neighborhood.

In the February interview with the Dallas Observer, Brown said he was hooked on policing immediately.

"I got to do what I still consider a lot of good work for people," he told the paper. "And a lot of tough work, you know, having to arrest some of my friends."

Since joining up, according to the Dallas Observer, he worked in patrol, SWAT and the internal affairs division before making his way up the ranks to chief six years ago. According to the paper, he is married to his high school girlfriend -- a former Dallas Police Department sergeant.

His career has been marked by controversy, however, including police union calls this year for his ouster.

Brown reportedly credited the new training with a decline in officer assaults and shootings by police, but some officers said the policies hindered their apprehension of suspects.

This year, police unions called for a new chief after he reportedly moved 600 officers to the evening shift in order to combat a sharp uptick in murders between January and March - to 42 from 24 over the same period in 2015.

"We're bringing the full force of the police department to bear on this spike in crime, and we are determined, determined to keep the citizens of Dallas safe," Brown told CBS DFW in March.

But union officials criticized Brown over the impact on officers.

Brown rejected the criticism as "union politics" and said he was focused on saving lives. Dallas mayor Mike Rawlings and city manager A.C. Gonzalez were reportedly quick to defend him, and Rawlings told reporters in March Brown is "the best police chief in America."

Brown stayed in the job.

Monday, Brown emphasized community policing and transparency as priorities for his department. He attributed a 12-year overall reduction in crime to aggressive community policing. He told the Dallas Observer he's faced criticism that the practice wastes resources, but he called it the city's "saving grace."

"In the 21st century, it's the best way to police our country,"Brown said Monday. "That type of policing works - it makes us all safe. I'm convinced."

In the wake of the shootings, Brown has staunchly defended his decision to use a remote-controlled bomb robot - an unprecedented move -- to kill the shooting suspect Micah Johnson amid an extended standoff in a downtown building. Monday, Brown said it "wasn't an ethical decision for me."

He said Johnson had already killed and wounded officers, was asking how many cops he had killed and told a negotiator he wanted to kill more.

Creuzot praised the decision, saying the chief took command of a dangerous situation, making "a very telling decision on his ability to confront danger."

Brown said Monday he's focused on supporting the families of the victims. Creuzot said Brown has shown "tremendous empathy." According to the Dallas Morning News, he's visited family at hospitals, telling the father-in-law of slain officer Patrick Zamarripa: "Thank you for letting us share Patrick."

Monday, Brown said that he's "running on fumes" but relying on his personal faith to deal with the aftermath of the ambush. On Friday in downtown Dallas, according to the Morning News, he wiped away tears as he addressed the crowd.

"This was a well-planned, well thought-out, evil tragedy," Brown said. "We are determined to not let this person steal this democracy from us."