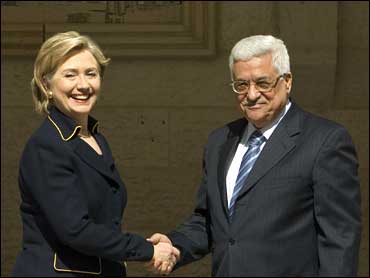 Secretary of State Hillary Rodham Clinton said Wednesday that Israel's demolition of Palestinian homes in Jerusalem has been "unhelpful" to Mideast peace efforts.

Israel has issued orders for the demolition of dozens of Palestinian homes in east Jerusalem in recent days. It says the homes were built illegally.

Palestinians argue they cannot receive proper building permits from Israeli authorities, and the planned demolitions are Israel's means of asserting control over the disputed city.

Speaking alongside Palestinian President Mahmoud Abbas in the West Bank on Wednesday, Clinton called the demolitions "unhelpful," and said they violate Israeli pledges under the "road map" peace plan.

She said she would take up the issue with the incoming Israeli government, which is expected to take office in the coming weeks.

It was the first indication that the Obama administration might be willing to confront Israel's new leaders over their cooperation in the peace process, but it was still unclear how hard Washington was willing to push the Jewish state.

A senior Abbas aide said earlier Wednesday that the Palestinian president would ask Clinton to convince Israel to freeze West Bank settlements and open border crossings into the Gaza Strip.

Her meeting with the Palestinian leader was part of her first trip to the region as Secretary of State.

Palestinians are watching closely for signs of change in U.S. policy toward their conflict with Israel. Even Palestinian moderates were disappointed with the previous administration's failure to take Israel to task for accelerated construction of Jewish settlements in the West Bank.

The Palestinians want to establish their state in the West Bank, east Jerusalem and Gaza, areas Israel captured in the 1967 Mideast war. Settlement expansion in the Palestinian-claimed areas undercuts Abbas' standing at home.

In Jerusalem on Tuesday, Clinton declared that the creation of a Palestinian state "seems inescapable" as part of a peace agreement with Israel, a clear message to Israeli Prime Minister-designate Benjamin Netanyahu, who opposes statehood.

Clinton met with Netanyahu, as well as Tzipi Livni and Ehud Barak, the outgoing foreign and defense ministers, on Tuesday.

Erekat said the Palestinian leader is seeking a tougher U.S. stance toward Israel. "The main point is that the Israeli government needs to accept the two-state solution and ... that it stop settlement expansion," Erekat said.

The future of Hamas-ruled Gaza is also on the agenda. Abbas lost control of Gaza in June 2007, when the Islamic militant Hamas seized control by force. Israel and Egypt closed Gaza's borders in response, a policy tacitly supported by the international community, which shuns Hamas as a terrorist group.

However, the blockade has come under renewed scrutiny following Israel's three-week military offensive against Hamas, which ended in an informal cease-fire Jan. 18. Some 15,000 homes were destroyed or damaged in the war, meant to halt Palestinian rocket fire on southern Israel, and international aid officials say Gaza's borders need to reopen to make reconstruction possible.

"We want the U.S. to help us open the passages to get material for reconstruction into Gaza," Erekat said.

Clinton is coming to the West Bank two days after she and other top diplomats from some 80 donor countries and international organizations met in the Egyptian resort of Sharm el-Sheik for a Gaza pledging conference. The conference raised $5.2 billion, both for Gaza reconstruction and Abbas' government budget.

In pledging about $900 million to the cause from America, Clinton also vowed that none of the aid money would end up in the hands of Hamas militants.

In her meeting with Barak on Tuesday, Clinton urged easing the flow of goods into Gaza to alleviate the hardships of ordinary Gazans, Israeli officials said. They spoke on condition of anonymity because the talks were private.

Currently, Israel allows several dozen truckloads of aid to get into Gaza every day, but bars the entry of concrete, pipes and other materials that would be crucial for reconstruction. Israel argues that such shipments could be seized by Hamas and used for building bunkers or rockets.

The Gaza offensive did not end the rocket fire, and on Wednesday, Israeli aircraft struck three tunnels on the Gaza-Egypt border that militants are suspected of using to smuggle in weapons.

In Jerusalem on Tuesday, Clinton demanded that Hamas cease its rocket attacks, saying Israel should not "be expected to sit idly by and allow rockets (to) assault its people and its territory."

She also announced that the U.S. would dispatch two envoys to Syria in an effort to warm frosty relations - part of a bigger set of diplomatic maneuvers the Obama administration is juggling as it attempts to steer a new course toward a broad Middle East peace.