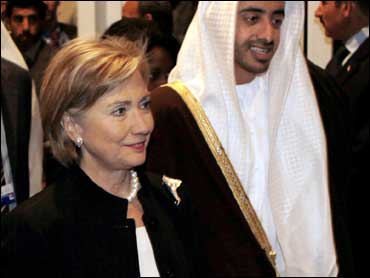 International donors pledged $5.2 billion to rebuild the devastated Gaza Strip and boost the Palestinian president at a conference Monday, while pushing the Palestinians to end their divisions and revive the peace process with Israel.

The conference at the Egyptian resort city of Sharm El-Sheik gathered the presidents of Egypt and France, the U.N. chief and top diplomats from 45 nations - including Hillary Rodham Clinton in her first Mideast trip as U.S. secretary of state - in a high-profile attempt to show international support for reconstruction after Israel's crippling offensive against Hamas.

But the broader message was that Palestinian President Mahmoud Abbas and his rivals, the militant Hamas, must resolve their dispute and form a government that can move ahead with rebuilding in Gaza and return to the negotiating table with Israel.

Clinton issued a blunt call at the conference for urgent action to forge a comprehensive Arab-Israeli peace, saying, "The top priority now is to reach a truce in Gaza between the Israeli and Palestinian sides.

"We cannot afford more setbacks or delays - or regrets about what might have been, had different decisions been made," she said in apparent reference to the failure of previous peace initiatives, including those pushed vigorously by her husband's administration.

"We will work with the Palestinian Authority to install safeguards to ensure that our money is only used where and for whom it is intended and does not end up in the wrong hands," she added in her prepared remarks.

The 80 nations and international organizations at Monday's gathering in this Red Sea resort pledged $5.2 billion, Egyptian Foreign Minister Ahmed Aboul Gheit told reporters. Most of that amount - $4.48 billion - comes from new pledges, while the rest are old, unfulfilled pledges that donors recommitted to giving, he said.

Aboul Gheit says the figure is "beyond of our expectations."

Palestinian Planning Minister Samir Abdullah said the money is earmarked for humanitarian aid to Gaza, rebuilding in the territory and budget support to the West Bank-based Palestinian Authority. He could not immediately say how much was going to each fund.

The biggest donor is Saudi Arabia with $1 billion, followed by the United States, which promised $900 million, a third for humanitarian aid to Gaza and the rest to assist the Palestinian Authority of President Mahmoud Abbas.

CBS News' George Baghdadi, also reporting from Sharm El-Sheik, said that the biggest challenge facing the aid summit is not getting the money pledged, but figuring out how to channel it to those who need it, and not into the hands of the Hamas movement.

The international community refuses to negotiate with Gaza's militant Hamas rulers, considered a terrorist group by the United States and Israel. Hamas was not invited to the conference in this Red Sea resort. But Abbas' government, based in the West Bank, has little presence in Gaza after being driven out by Hamas in 2007.

In a significant move, Arab Gulf nations - including Saudi Arabia, Qatar and Kuwait - pledged $1.6 billion, but bypassed both Hamas and Abbas. The Gulf nations said in a statement they would set up a joint office in Gaza to carry out reconstruction on their own, deciding on projects and implementing them.

With the move, Gulf countries may be trying to signal to Hamas that Gulf nations are not favoring Abbas, hoping to encourage the militant group to moderate and reconcile with his Palestinian Authority.

Karen AbuZayd, the head of the U.N. aid agency for Palestinian refugees, told the AP that many donor nations had discussed possibly using the United Nations as an alternative route to avoid the sticky issue of who controls the funds.

"Certain donors have come forward to ask, and some of the regional parties as well have thought, that perhaps the U.N. could do more than what it's doing or what is its mandate," she said.

Baghdadi reports that, in his opening remarks, Egyptian President Hosni Mubarak said that only a "national Palestinian government" should handle aid money through a "transparent international mechanism" accepted by all.

Mubarak warned that the donors' pledges should not be treated as "spoils of war" - a message to rival Palestinian factions not to squabble over the funds.

He also said reconstruction will depend on reaching a long-term truce between Hamas and Israel, which Egypt is trying to mediate, and the opening up of Gaza's border crossings, which have been largely closed since Hamas took over the territory.

French President Nicolas Sarkozy said "responsible Palestinians" should seek peace with Israel and said a prisoner exchange by Hamas to release Israeli soldier Gilad Schalit, held by Gaza militants since June 2006, "is a priority." Israel has demanded Schalit's release as part of any truce deal.

"You must admit that there is no other road to the creation of a Palestinian state but to engage resolutely in searching for a political solution and engage in a dialogue with Israel," Sarkozy said in a clear message to the militant group.

Abbas asked participants to adopt his prime minister Salam Fayyad's reconstruction plan, describing it as a "national comprehensive development plan" and promised the reconstruction would be based on "transparency and justice."

Fayyad has prepared a 53-page plan for the donors, including detailed damage assessments. For example, fixing war damage to infrastructure and homes would cost $501 million, according to the plan, which says 4,036 homes were destroyed and 11,514 damaged.

Hamas spokesmen Fawzi Barhoum sought to dispel fears his group was trying to grab funds but also said they shouldn't be channeled through Abbas. He urged the conference to work out "meaningful mechanisms" to get money directly to Gazans "without going into the internal Palestinian political differences."