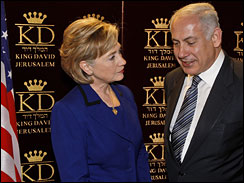 Secretary of State Hillary Clinton promised on Tuesday to work with the incoming Israeli government, but delivered a clear message that could put her at odds with the country's next leader: Movement toward the establishment of a Palestinian state is "inescapable."

At the same time, Clinton said she would not dictate orders to Israel, saying the Jewish state would determine its interests.

Clinton is making her first visit to the region as secretary of state during a transition period in Israel.

Prior to her meeting with prime minister-designate Benjamin Netanyahu, she spoke alongside Israeli Foreign Minister Tzipi Livni, at which time she said the U.S. was "vigorously engaged in the pursuit of a two-state solution."

Clinton stressed the U.S.'s "unrelenting" commitment to Israel's security and said rocket fire at Israel from militants in Gaza "must stop."

"There is no doubt that any nation, including Israel, cannot stand idly by while its territory and people are subjected to rocket attacks," she said, criticizing the rocket fire as "cynical."

"We spoke at length about the problems in our region, about Iran, about forging a path towards peace with the Palestinians, about the need to ensure that we have security, peace and prosperity in our region," he said.

CBS News correspondent Robert Berger reports that, even with the shift in the Likud Party's stance on peace talks, it may be hard for the U.S. and Israel to find common ground, as Netanyahu still opposes Palestinian statehood.

He has suggested in the past he would instead invest in the Palestinian economy while continuing Israel's military occupation of the West Bank indefinitely.

Speaking to the press Tuesday, Clinton lamented that President Barack Obama's attempts to reach out to Iran have so far been unsuccessful. The U.S. and Israel accuse Iran of pursuing nuclear weapons and supporting anti-Israel militant groups.

Clinton, seeking to calm her Israeli hosts, said diplomacy should not be confused with softness.

"When we talk about engagement with Iran, do not be in any way confused, our goal remains the same: to dissuade and prevent Iran from acquiring nuclear weapons and continuing to fund terrorism," she said. "Whatever we do will be done thoughtfully in consultation with our friends and Israel, most particularly Israel."

Senior Israeli officials, including Defense Minister Ehud Barak, told Clinton that Israel does not oppose Washington's overtures to Iran. However, they said they were skeptical about Iran's intentions and urged the U.S. to set a deadline for Iran to respond positively. Israel fears Iran will use American engagement to buy time to develop nuclear weapons.

When asked about Netanyahu, she acknowledged the possibility of disagreements with any Israeli government and made clear the U.S. will push forward with its efforts to forge a peace deal that includes the creation of an independent Palestinian state alongside Israel.

"The United States will be vigorously engaged in the pursuit of a two-state solution every step of the way," she said. "The inevitability of working toward a two state-solution is inescapable."

Netanyahu characterized his talks with Clinton as "deep and important and good" and said the two agreed to meet again once a new Israeli government is formed.

Netanyahu, leader of the hardline Likud Party, is putting together a new coalition government after right-wing and Orthodox Jewish parties won a majority of seats in last month's Israeli parliamentary election. He is expected to be sworn in as prime minister within weeks.

At present, it appears his most likely government will be a narrow alliance of hard-line and Orthodox parties opposed to significant concessions for peace.

Netanyahu has several weeks to form a new governing coalition. His attempts to bring Livni, his centrist rival, into a broad coalition government have failed so far, largely because of Netanyahu's refusal to embrace Livni's call for the creation of a Palestinian state alongside Israel.

His criticism of U.S.-led Mideast peace talks during the recent election campaign has raised fears that his government could clash with the Obama administration.

But ahead of his meeting with Clinton, Netanyahu showed signs of backing off his previous pledges to abandon the current round of peace talks, launched in November 2007 at a U.S.-hosted summit. 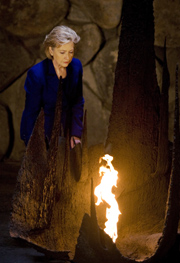 (AP Photo/Sebastian Scheiner )
(left: Clinton rekindles the Eternal Flame in the Hall of Remembrance during a visit at the Yad Vashem Holocaust Memorial in Jerusalem, Tuesday March 3, 2009.)

On Wednesday, Clinton will call on Palestinian President Mahmoud Abbas in the West Bank.

Clinton arrived in Jerusalem Monday evening from the Egyptian Red Sea resort of Sharm el-Sheik, where she pledged $900 million in U.S. aid at an international donor conference for rebuilding the Gaza Strip after Israel's recent offensive against its Hamas rulers. In pledging the money, Clinton vowed that none of the funds would make it into the hands of Hamas militants.

Speaking at the Sharm el-Sheikh conference, Clinton said the Obama administration was committed to pushing intensively to find a way for Israelis and Palestinians to exist peacefully in separate states, and called for urgent action to forge a comprehensive Arab-Israeli peace.