The September 1993 Israel-PLO Declaration of Principles on Interim Self-Government Arrangements provided for a transitional period of Palestinian self-rule in the West Bank and Gaza Strip.

Under a series of agreements signed between May 1994 and September 1999, Israel transferred to the Palestinian Authority (PA) security and civilian responsibility for Palestinian-populated areas of the West Bank and Gaza. Negotiations to determine the permanent status of the West Bank and Gaza stalled following the outbreak of an intifada in September 2000, as Israeli forces reoccupied most Palestinian-controlled areas.

In April 2003, the Quartet (US, EU, UN, and Russia) presented a roadmap to a final settlement of the conflict by 2005 based on reciprocal steps by the two parties leading to two states, Israel and a democratic Palestine. The proposed date for a permanent status agreement was postponed indefinitely due to violence and accusations that both sides had not followed through on their commitments. Following Palestinian leader Yasir ARAFAT's death in late 2004, Mahmud ABBAS was elected PA president in January 2005.

A month later, Israel and the PA agreed to the Sharm el-Sheikh Commitments in an effort to move the peace process forward. In September 2005, Israel unilaterally withdrew all its settlers and soldiers and dismantled its military facilities in the Gaza Strip and withdrew settlers and redeployed soldiers from four small northern West Bank settlements. Nonetheless, Israel controls maritime, airspace, and most access to the Gaza Strip.

A November 2005 PA-Israeli agreement authorized the reopening of the Rafah border crossing between the Gaza Strip and Egypt under joint PA and Egyptian control. In January 2006, the Islamic Resistance Movement, HAMAS, won control of the Palestinian Legislative Council (PLC). The international community refused to accept the HAMAS-led government because it did not recognize Israel, would not renounce violence, and refused to honor previous peace agreements between Israel and the PA.

(CBS)
HAMAS took control of the PA government in March 2006, but President ABBAS had little success negotiating with HAMAS to present a political platform acceptable to the international community so as to lift economic sanctions on Palestinians.

The PLC was unable to convene throughout most of 2006 as a result of Israel's detention of many HAMAS PLC members and Israeli-imposed travel restrictions on other PLC members. Violent clashes took place between Fatah and HAMAS supporters in the Gaza Strip in 2006 and early 2007, resulting in numerous Palestinian deaths and injuries. ABBAS and HAMAS Political Bureau Chief MISHAL in February 2007 signed the Mecca Agreement in Saudi Arabia that resulted in the formation of a Palestinian National Unity Government (NUG) headed by HAMAS member Ismail HANIYA.

However, fighting continued in the Gaza Strip, and in June, HAMAS militants succeeded in a violent takeover of all military and governmental institutions in the Gaza Strip. ABBAS dismissed the NUG and through a series of Presidential decrees formed a PA government in the West Bank led by independent Salam FAYYAD.

HAMAS rejected the NUG's dismissal and has called for resuming talks with Fatah, but ABBAS has ruled out negotiations until HAMAS agrees to a return of PA control over the Gaza Strip and recognizes the FAYYAD-led government. FAYYAD and his PA government initiated a series of security and economic reforms to improve conditions in the West Bank.

ABBAS participated in talks with Israel's Prime Minister OLMERT and secured the release of some Palestinian prisoners and previously withheld customs revenue. During a November 2007 international meeting in Annapolis Maryland, ABBAS and OLMERT agreed to resume peace negotiations with the goal of reaching a final peace settlement by the end of 2008. 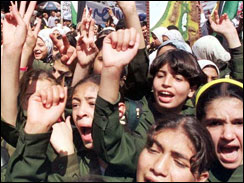 Mideast Conflict
Events, key players and a history of the world's most unstable region.