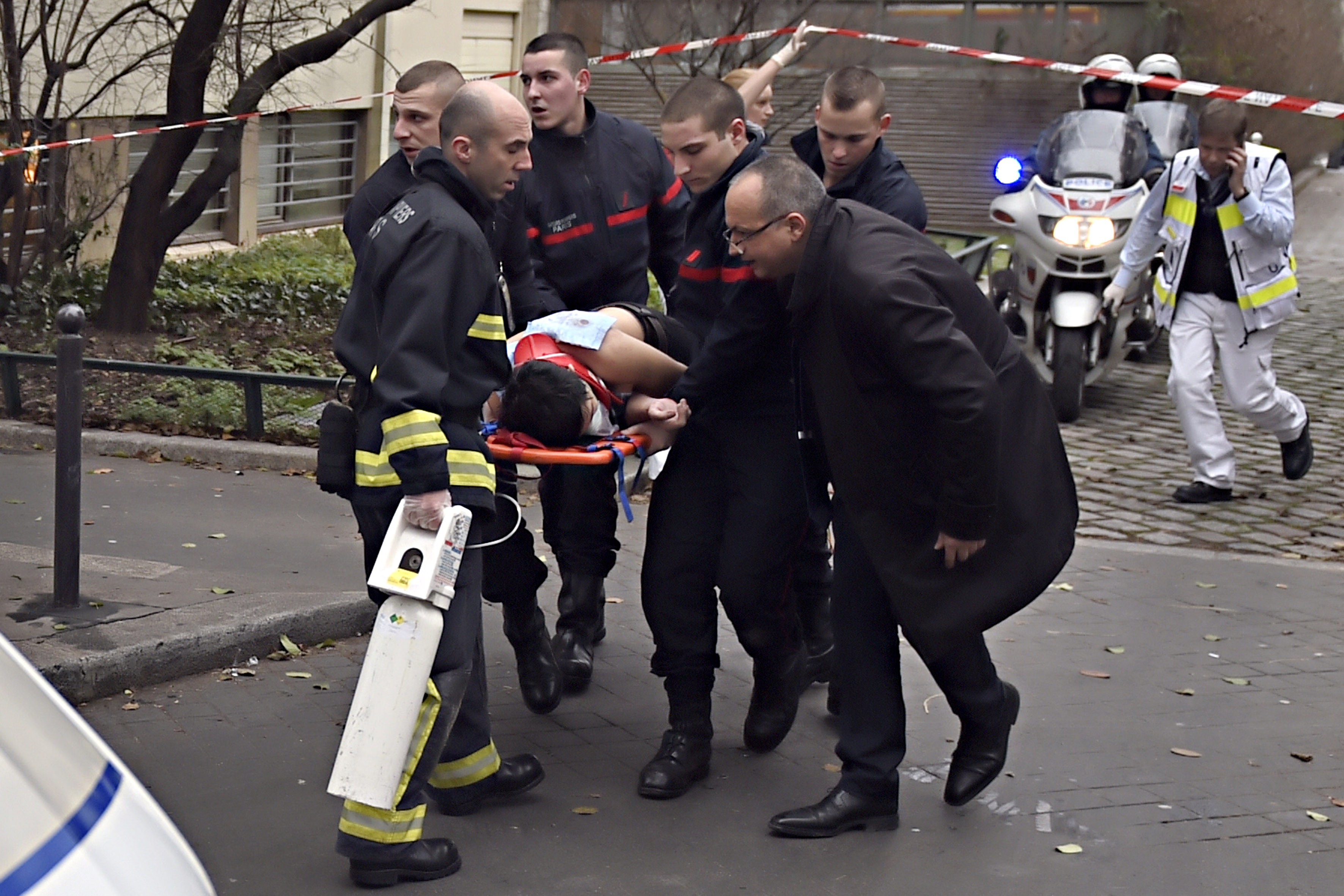 PARIS -- Three masked gunmen stormed the Paris offices of a satirical newspaper Wednesday, killing 12 people, including its editor, before escaping in a car. It was France's deadliest postwar terrorist attack.

CBS News' Elaine Cobbe reports that, according to witnesses, two armed and masked men walked into the headquarters of the Charlie Hebdo magazine and opened fire in the entrance hallway, killing people as they saw them. The gunmen reportedly sought out members of the newspaper's staff by name during the rampage through the 2nd floor office, which lasted between five and 10 minutes, according to witnesses.

Security forces were hunting for the gunmen who spoke flawless, unaccented French in the military-style noon-time attack on the weekly newspaper, located near Paris' Bastille monument. The publication's caricatures of the Prophet Muhammed have frequently drawn condemnation from Muslims.

President Francois Hollande said it was a terrorist act "of exceptional barbarism," adding that other attacks have been thwarted in France in recent weeks. Fears have been running high in France and elsewhere in Europe that jihadis returning from conflicts in Syria and Iraq will stage attacks at home.

In a somber address to the nation Wednesday night, Hollande pledged to hunt down the killers, and pleaded with his compatriots to come together in a time of insecurity and suspicion.

France raised its security alert to the highest level and reinforced protective measures at houses of worship, stores, media offices and transportation. Schools closed across Paris, although thousands of people jammed Republique Square near the site of the shooting to honor the victims.

There was no immediate claim of responsibility for the shootings, which also left 11 people wounded - four of them critically - and was condemned by world leaders as an attack on freedom of expression. Supporters of the Islamic State of Iraq and Syria (ISIS) praised the attack.

CBS News correspondent Bob Orr reports that U.S. intelligence is working with the French authorities in trying to determine who's behind the attack.

"While it is true that Charlie Hebdo magazine has been the subject of violent extremist threats over the past several years, none has been recent nor can they be immediately linked to this attack," a senior U.S. intelligence official told CBS News. "We are working with our intelligence community and foreign partners in identifying the perpetrators of the attack as well as monitoring for threat reporting that might warn of a subsequent attack."

Clad all in black with hoods and carrying assault rifles, the attackers forced one of the cartoonists arriving at the office building with her young daughter to open the door with a security code.

The staff was in an editorial meeting and the gunmen headed straight for the paper's editor, Stephane Charbonnier - widely known by his pen name Charb - killing him and his police bodyguard first, said Christophe Crepin, a police union spokesman. Minutes later, two men strolled out to a black car waiting below, calmly firing on a police officer, with one gunman shooting him in the head as he writhed on the ground, according to video and a man who watched in fear from his home across the street.

The witness, who refused to allow his name to be used because he feared for his safety, said the attackers were so methodical he first mistook them for France's elite anti-terrorism forces. Then they fired on the officer.

"They knew exactly what they had to do and exactly where to shoot. While one kept watch and checked that the traffic was good for them, the other one delivered the final coup de grace," he said. "They ran back to the car. The moment they got in, the car drove off almost casually."

The witness added: "I think they were extremely well-trained, and they knew exactly down to the centimeter and even to the second what they had to do."

Ten journalists and two police office were killed, Crepin said, including one assigned as Charb's bodyguard and another who had arrived on the scene on a mountain bike. Among the dead were Bernard Maris, an economist who a contributor to the newspaper and was heard regularly on French radio, and Georges Wolinski, a celebrated cartoonist who also worked for Paris Match magazine.

"Hey! We avenged the Prophet Muhammad! We killed Charlie Hebdo," one of the men shouted in French, according to a video shot from a nearby building and broadcast on French TV. Other video showed two gunmen in black at a crossroads who appeared to fire down one of the streets. A cry of "Allahu akbar!" - Arabic for "God is great"- could be heard among the gunshots.

The video showed the killers moving deliberately and calmly. One even bent over to toss a fallen shoe back into the small black car before it sped off. The car was later found abandoned in northern Paris, police said.

Luc Poignant of the SBP police union said the attackers switched to another vehicle that had been stolen.

A reporter for Britain's Telegraph newspaper in Paris told Sky News that the first two officers to arrive, who were apparently unarmed, fled after seeing gunmen armed with automatic weapons and possibly a grenade launcher.

Corinne Rey, the cartoonist who said she was forced to let the gunmen in, said the men spoke fluent French and claimed to be from al Qaeda. In an interview with the newspaper l'Humanite, she said the entire shooting lasted perhaps five minutes.

The security analyst group Stratfor said the gunmen appeared to be well-trained, "from the way they handled their weapons, moved and shot. These attackers conducted a successful attack, using what they knew, instead of attempting to conduct an attack beyond their capability, failing as a result."

Both al Qaeda and ISIS have repeatedly threatened to attack France. Just minutes before the attack, Charlie Hebdo had tweeted a satirical cartoon of the ISIS leader giving New Year's wishes:

Charlie Hebdo has been repeatedly threatened for its caricatures of the Prophet Muhammad and other sketches. Its offices were firebombed in 2011 after an issue featured a caricature of the prophet on its cover. Nearly a year later, the publication again published Muhammad caricatures, drawing denunciations from the Muslim world because Islam prohibits the publication of drawings of its founder.

Another cartoon, released in this week's issue and entitled "Still No Attacks in France," had a caricature of a jihadi fighter saying "Just wait - we have until the end of January to present our New Year's wishes." Charb was the artist.

"This is the darkest day of the history of the French press," said Christophe DeLoire of Reporters Without Borders.

"The motive here is absolutely clear; trying to shut down a media organization that lampooned the Prophet Mohammad," CBS News security consultant and former CIA deputy chief Mike Morell told "CBS This Morning co-host Charlie Rose. "What we have to figure out here is the perpetrators and whether they were self-radicalized or whether they were individuals who fought in Syria and Iraq and came back, or whether they were actually directed by ISIS or al Qaeda."

Morrell added a warning that law enforcement and intelligence agencies would need to "worry about copycat attacks, not only in France but in the rest of the world, and I would even say in the broader world to include the United States."

The New York Police Department released a statement, saying it had a detective stationed in Paris and "will continue to closely monitor the situation."

"There are standing contingency plans in place to adjust police deployments based on any unfolding situation in the world. That includes how we use and where we position and deploy specialized police resources," said Deputy Commissioner Intelligence and Counterterrorism John Miller.

In the winter 2014 edition of the al Qaeda magazine Inspire, a so-called chief describing where to use a new bomb said: "Of course the first priority and the main focus should be on America, then the United Kingdom, then France and so on."

In 2013, the magazine specifically threatened Charb and included an article titled "France the Imbecile Invader."

An al Qaeda tweeter who communicated Wednesday with AP said the group is not claiming responsibility, but called the attack "inspiring."

CBS News national security analyst Juan Zarate also noted on "CBS This Morning" that "France has been dealing with the problem of French foreign fighters flowing into Syria and Iraq and coming back into France."

He says it may be more likely, however, that the attack on Charlie Hebdo was carried out by "self-radicalized individuals, individuals who take their prompt from the propaganda of these groups and took it upon themselves, perhaps, to attack."

Zarate pointed to the attack by young French Muslim man Mohamed Merah, who shot up a Jewish community center in the country's south in March 2012, as an example of this sort of violence.

"France is not new to this, and the perpetrators could be a wide spectrum of individuals who were inspired to attack fellow French citizens," said Zarate.

President Obama spoke to President Hollande to express his sympathies for the attack in Paris Wednesday. In remarks before a meeting with Secretary Kerry and Vice President Biden, Mr. Obama called the shootings "cowardly and evil," and he said, "The fact that this was an attack on journalists, an attack on our free press, also underscores the degree to which these terrorists fear freedom of speech, freedom of the press."

He continued, "A universal belief in freedom of expression is something that can't be silenced because of the senseless violence of the few." The president promised the U.S. would stand with France and said that U.S. counterterrorism was providing assistance to the French to help hunt for those responsible for the shooting.

"We stand squarely for free speech and democracy. These people will never be able to take us off those values," Cameron said in the House of Commons.

Mohammed Moussaoui, president of the Union of French mosques, condemned the "hateful act," and urged Muslims and Christians "to intensify their actions to give more strength to this dialogue, to make a united front against extremism."

On social media, supporters of militant Islamic groups praised the move. One self-described Tunisian loyalist of al Qaeda and the Islamic State group tweeted that the attack was well-deserved revenge against France.

Elsewhere on the Internet, the hashtag #JeSuisCharlie was trending as people expressed support for weekly and for journalistic freedom.