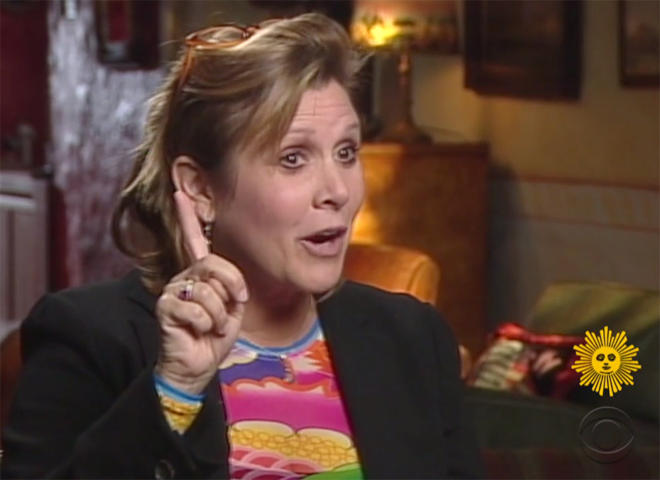 Carrie Fisher’s new novel “The Best Awful” is a thinly fictionalized account of how Hollywood talent agent Bryan Lourd, the father of her real life daughter, left her for another man, and of her battle with mental illness.

CBS News Correspondent Rita Braver explains Fisher may be one of the few people to suffer from manic depression, go to a mental institution and make it funny.

“It better be funny,” she says. “If my life wasn’t funny, it would just be true and that’s unacceptable.”

If the truth sometimes hurts, 47-year-old Fisher is not one to shrink from it.

“Both my parents together, I think, have been married about eight times or something,” Fisher laughs half-jokingly. “I don’t have good role models, so it’s their fault, everything is their fault.”

Movie star Debbie Reynolds and crooner Eddie Fisher are Fisher’s parents. In the 1950s, they were America’s sweethearts. But, Eddie left Debbie for bombshell Elizabeth Taylor when Carrie was just a toddler.

Carrie Fisher has always been in or around the spotlight.

“It’s been terrific,” she says. “Just a round of fun, over and over again. It’s something that you get used to. It’s not a choice I made.”

Fisher did choose to enter the family business -- first, in her mother’s nightclub act and then in Hollywood. She made her film debut at 17, playing a rebellious teenager who had a fling with Warren Beatty in “Shampoo.”

Two years later, she nabbed her most famous role as feisty Princess Leia in “Star Wars.”

The celebrity that came with Star Wars was overwhelming, as she told close friend Tracey Ullman before a Los Angeles audience last month.

“You’ve been merchandised up the wazoo,” Ullman said to Fisher.

“I don’t own my image,” says Fisher. “Every time I look in the mirror, I have to send George Lucas a couple of bucks.”

Fisher continued her acting career, playing John Belushi’s girlfriend in “The Blues Brothers.” And, she won praise as Meg Ryan’s pal in “When Harry Met Sally.”

But, it was writing that really became her passion.

“Everything worked out very well in books,” explains Fisher. “[It’s] much more organized and ordered than everything out here.”

Fisher has written four novels. Her current book is a sequel to her first, the semi-autobiographical “Postcards from the Edge,” which was published in 1987. That was about drug abuse, rehab and the relationship with a larger than life mother. It became a best seller, and a hit movie with Meryl Streep and Shirley MacLaine. Fisher wrote the screenplay.

Some may think the daughter-mother relationship in the movie was over the top, but truth may be stranger then fiction. Fisher and Reynolds are close these days -- very close.

One day, Reynolds told her daughter she was buying the house down the driveway from her.

“[Carrie Fisher] called me about the house, she said, ‘Mother, the man just died.’ And I said, ‘Should I go to the funeral,’ and she said ‘No, you should buy the house.’”

“The reason she can write so many books is because of me,” says Reynolds.

Fisher says her mother is great for material.

Most Americans may be shocked by Reynolds’s friendship with Elizabeth Taylor. Reynolds, however, says she doesn’t have bitter feelings against the woman that stole her husband.

“[Taylor] was just as dumb as I was, so fall in line,” says Reynolds.
Carrie Fisher has forgiven Elizabeth Taylor, too.

“The best thing Elizabeth Taylor did for me was getting Eddie Fisher out of our house,” she says.

Fisher presented Taylor with an award for AIDS activism some time ago.
Carrie Fisher may have survived in Hollywood because she is both a star there and an astute observer, especially of herself. There’s nothing in her life that seems to be off limits.

Fisher’s psychotic break came in 1997. She spent weeks in a mental hospital, then five months of outpatient care. She’s still on medication. It took her years to find humor in her illness, to work through the pain and write her new book.

Fisher says she titled her book “The Best Awful” because manic depression is the best awful there is.

“The symptoms are spending sprees, sexual promiscuity … lot of talking, drug use,” she says. “It just sounds to me like a really fun weekend in Vegas.”
Her wit and wits have earned Fisher a devoted fan base -- folks who admire her novels, her movie roles and her work as a Hollywood script doctor on films such as “Sister Act” and “The Wedding Singer.”

Even her back yard can make a person grin. It has stuff she’s accumulated over the years, including a statue from her former husband, singer/songwriter Paul Simon. Their 1983 marriage lasted less than a year.
Would she ever like to marry again?

Fisher says, “You know, that saying, ‘That you find someone when you stop looking.’ Or how about this, ‘No you don’t!’ That’s my wisdom for today. You don’t.”

The writer doesn’t act professionally as she once did, but, for now, Carrie Fisher seems to have found her role as a daughter, a mother, and a writer satisfying -- melding the facts of her life with the fiction of her imagination.

“I like having the option of making up stuff and making it to a certain way,” she says. “Life doesn’t fall out like in entertainment. It really doesn’t. And I like being able to make it go the way that I want, since I haven’t been able to do that in my actual life.

“What I figured out is I don’t have to turn into my mother if she lives next door.”