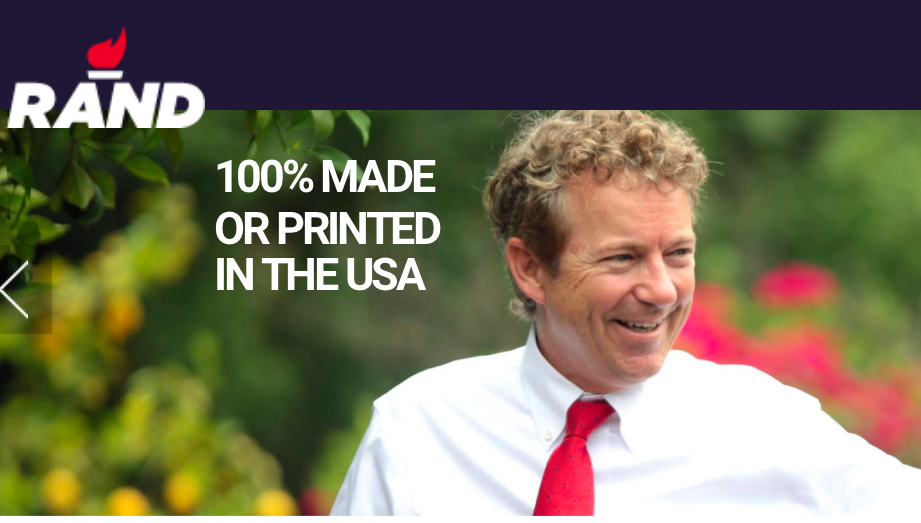 Watch CBS This Morning for more on this story.

The selling of presidential campaign swag is a fundamental part of nearly every major political campaign. It helps bring in money, build donor databases, and swag also makes a statement about the candidate.

One question some campaigns wrestle with is whether every piece of merchandise sold with their names writ large needs to be stamped "Made in America." For many, the answer is, in essence, not necessarily.

Republican candidate Rand Paul is currently selling a shirt on his website that declares "Defeat the Washington Machine, Unleash The American Dream."

Its label reads "Made in Guatemala."

"All of our products are either made in America, or printed in America," a spokesman for the Paul campaign said. "The [campaign] store was built and is run in the heartland of America. Unfortunately, not all products sold in the US are American made, but we are continually looking for products to offer that are."

Bella + Canvas, the company who manufactures the t-shirt says it does, in fact, have a "Made in the USA" collection as part of its full line. However, the shirt sold on Paul's website is not part of it.

Candidates on both sides of the aisle are pledging American-made products this cycle. Democrat Hillary Clinton's store advertises that her campaign's items are both American-made and union-made.

And spokespeople for the campaigns of Republicans Ted Cruz and Marco Rubio tell CBS News all of their merchandise is made in the USA.

Romney's former digital director Zac Moffatt, who oversaw the campaign's e-commerce store, explained that sourcing all of a campaign's products in the U.S. can present some challenges.

"You would be surprised how hard that can be," Moffatt said. "We were often running out of inventory."

Meaghan Burdick, who was in charge of marketing and merchandising for Obama's 2008 and 2012 campaigns, said American-made goods can also be more expensive, but the campaign products set the tone.

"You're running for President of the United States, so I think it should be made in the U.S.," Burdick said of the products she ordered. "We felt extremely strongly about it. We tried to have everything union-made, so it was made in the U.S. and union printed."

Many of the Republicans running are more flexible than Democrats on the origins of their candidate bobble-heads or bumper stickers. They largely support trade initiatives, as their congressional votes on trade suggest (Democrats are divided), and they say that the wares on their websites reflect this attitude.

"We live in a global society," explains Sean Spicer, communications director for Republican National Committee. "We are a party that welcomes and believes in free trade."

So, it depends on the message candidates want to send. The lengths to which campaigns will go to ensure every product is made in America, Spicer says, are the decisions of each individual candidate.