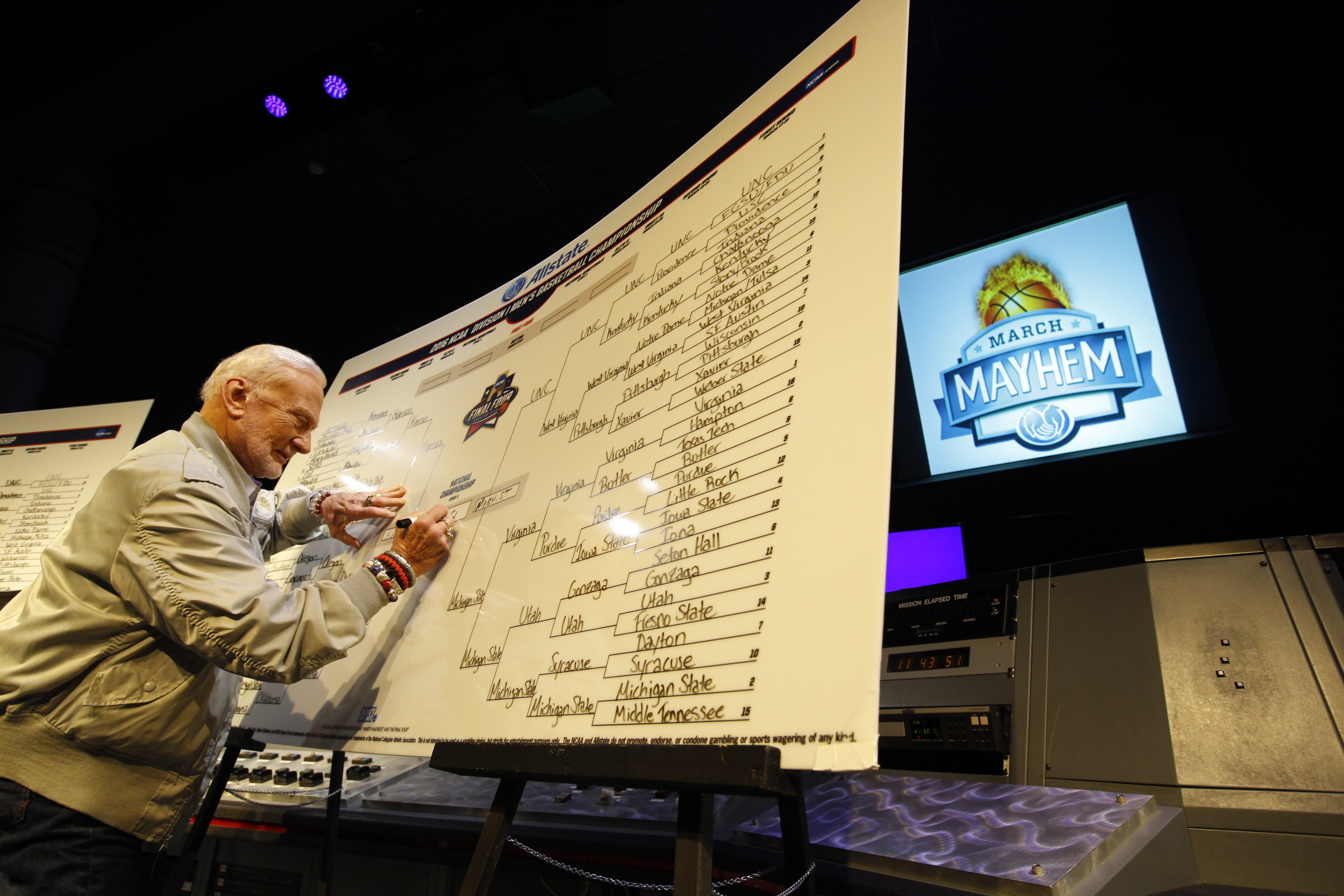 He was the second person to set foot on the moon, and now Apollo 11 astronaut Buzz Aldrin is setting his sights on new horizons -- sending humans to Mars, and, in the near term, picking a winning March Madness bracket.

At an event at the Space Center Houston on Tuesday, Aldrin, who admits he is far from the biggest college basketball expert in the solar system, announced his bracket picks, pitting them against ESPN's Dick Vitale as part of the Allstate March Mayhem Challenge.

Aldrin applied statistical analysis to choose his teams, and it's all for a good cause. Corporate sponsor Allstate will make a donation to the Space Center Houston on Aldrin's behalf and to the V Foundation for cancer research on behalf of Vitale.

Aldrin spoke with CBS News about basketball, the prospects of Mars exploration, and the career of Scott Kelly, a fellow space trailblazer. (This conversation has been condensed and edited).

Q: How did you first get involved with the Allstate March Mayhem Challenge? I see this is your first time filling out a bracket.

A: I don't know a whole lot about college basketball. This is my first time filling out a bracket. I took a lot more fact-based approach to crack the tournament.

Q: How do you 'crack the tournament?'

A: I analyzed the tournament, the history of it -- looking at different match-ups and using the Mayhem Bracket Predictor.

Q: This is a fun event, but it also benefits a good cause, the Space Center Houston. It has to be a good feeling for you to support an institution you believe in so strongly.

A: The Space Center Houston has the latest information about space for the public to enjoy and give them an understanding of what we did in the past and what we hope to do in the future.

Q: Where do you see space exploration headed in the future? You've been a big advocate for the need to explore and colonize Mars. Where are we headed?

A: I think we understand what we did quite awhile ago, to bring international space agencies together and help them explore different things on the moon, which will help make space exploration easier than when we did it. While we are doing that, we will be learning how to put together certain modules on the moon to know how to do that for when we get to Mars. We'll be using a cycling spacecraft that will take crews from Earth to Mars or the moon to Mars. We'll be making a bold reach to the moon to catch up on things like a reusable spacecraft space shuttle, building a station for many nations to come together. We are at the beginning of looking at bringing nations together for activities at the moon and helping them not compete with one another, but assist one another.

Q: 2019 will be the 50th anniversary of the first lunar landing and we will be a couple years into the first term of the next president. Right now, it's a presidential election year and we haven't heard many of the candidates speak about space exploration or efforts to bring humans to Mars. Is there enough talk about space exploration currently in the public discourse?

A: No, there never is. I've done what I can to spread the word, in preparing with universities to set up a bold plan for the future. It starts early in 2018 and hopefully then there will be a mission to the moon, of just placing a spacecraft there so that a crew could help celebrate a 50th anniversary. The President who'll be governing then should be convinced that this is a good time to make a commitment to help international crews land on Mars before 2040.

Q: You've been advocating for sending humans to Mars since 1969. Why is it taking so long?

A: I think the public needs to be reminded just how much inspiration and intention was given throughout the world to be bold, to send human beings to the moon in the '60s and the '70s. It's important now to bring together the nations that weren't able to do it then and help them do it. We need to move forward.

Q: Switching gears, as you know, Scott Kelly recently announced his retirement. What are your thoughts on his career? You're both such public representations of space exploration. What will be his lasting impact?

A: I think that both the identical twins -- Mark and Scott Kelly -- have contributed greatly to the advance of space exploration and the advance of long-duration space flights. His year in space was a very special one -- we can compare the responses and the things that have transpired with one twin while he has been in orbit for at least one year with the other twin.

We can continually do that more and more as we plan and hopefully we will be able to do some sort of dress rehearsal for our astronauts before they go in orbit around the moon. Eventually they will assemble things on the surface of the moon, land on the moon for a period of time down there and come back. That way they will be rather qualified to be able to carry out those missions to Mars.

A: I like to do a lot of things that put me in the public eye. With talking about Mars, with participating with Dick (Vitale) and this Mayhem Challenge. So, everyone, be sure to follow me on Twitter to see how my bracket does! It's @TheRealBuzz -- follow me!