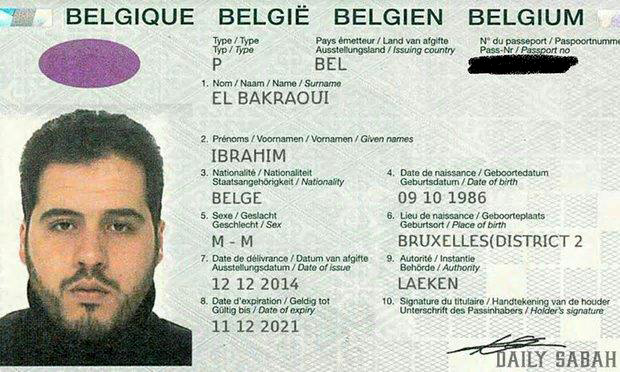 BRUSSELS --When Ibrahim El Bakraoui blew himself up in the Brussels Airport check-in area, killing and maiming scores of travelers, it was at least the third time he had passed unimpeded through an airport terminal in recent months.

Suspected by Turkey of being a "foreign terrorist fighter" and known at home in Belgium as an ex-con wanted for parole violations, Bakraoui was still allowed to board a commercial airliner unaccompanied last summer, flying freely from Istanbul to the Netherlands and disappearing without a trace.

The ease with which he did so raises questions about how much governments know about the movements of returnees among the 5,000 home-grown jihadis who have trained and fought in places like Syria or Iraq. Many now pose a "serious threat," according to the police agency Europol. Some, like Bakraoui, have already used their deadly skills in cities like Brussels or Paris.

Testimony from government ministers, extracts of documents and conversations with police, border and aviation officials reveal a series of security gaps, misunderstandings and procedural red-tape that surrounded the deportation last July of this future suicide bomber.

Even those who take some responsibility for missing the threat Bakraoui posed find it hard to understand why his capture raised no alarms. This was a man picked up by Turkish authorities in Gaziantep near Syria, who had done jail time in Belgium for armed robbery, including shooting at police with a Kalashnikov.

"We are talking about someone with a 10-year conviction, who spent a few years in prison, then traveled via Turkey to the Syrian border," Belgian Interior Minister Jan Jambon said on March 25, as lawmakers probed for security shortfalls three days after the Brussels attacks left 32 people dead.

"You don't have to have worked long on terrorism to conclude from all this that there is a very high probability -- 90 percent, 99 percent, take your pick -- that we are dealing with a foreign fighter," he said.

Bakraoui may be just one case among many. Turkey has deported around 3,250 suspected "foreign terrorist fighters" since 2011 -- a number that does not include those turned back before making it to Syria, according to its foreign ministry.

Turkey's government says Belgium made no extradition request for Bakraoui when it learned on June 26 that he was in Turkey, leaving him free to travel anywhere in Europe.

"It was obvious that he was affiliated and involved in the conflict zones, and he was wounded. That is the reason why he was deported. And this is the information that was communicated to Belgium," President Recep Tayyip Erdogan told CNN in an interview aired Thursday.

Bakraoui is not the only case to fall through the communications gap. In September 2014, just over a year before Bakraoui's trip to Amsterdam, three French jihadis who said they were defecting from the Islamic State of Iraq and Syria (ISIS) were able to buy tickets to Marseille, fly together unescorted and walk out of customs as free men, one of their lawyers, Pierre Dunac, said.

According to France's interior ministry, they were detained in Turkey for visa violations -- although they were wanted men back home. Before setting out for Syria, two of them were associated with Mohamed Merah, the Islamic extremist who killed seven people in the south of France in 2012.

Amid a government uproar, the three turned themselves in to French police and have been behind bars ever since, facing terrorism charges.

Paris Prosecutor Francois Molins said Wednesday that the suspect, Reda Kriket, is accused of participating in a terrorist group with plans for at least one attack, possessing and transporting arms and explosives, and holding fake documents, among other charges. Kriket will stay in custody while magistrates continue investigating the case and determine whether to send him to trial.

Kriket is believed to have traveled to Syria in 2014 and 2015 and made several trips between France and Belgium and the Netherlands, Molins said.

At least three other people are in custody in the case in Belgium and the Netherlands.

Molins did not say whether Kriket's purported plot was linked to the ISIS network behind last week's attacks in Brussels and last November's attacks in Paris.

During the March 24 raid that ended in his arrest two days after the Brussels attacks, police found a small quantity of explosives at Kriket's apartment in Argenteuil, on the northern outskirts of Paris.

Kriket was convicted in absentia in July in Belgium for recruiting ISIS members along with Abdelhamid Abaaoud, one of the key leaders of the Paris attacks, CBS News correspondent Debora Patta reported.

Kriket, a French national, was convicted alongside Abaaoud of being part of a jihadist network planning to travel to Syria.

Before being killed in a police raid, the ringleader of the Nov. 13 Paris attacks claimed to have entered Europe in a multinational group of 90 fighters, who scattered "more or less everywhere."

The Associated Press reported that ISIS has trained at least 400 fighters to target Europe in deadly waves of attacks, deploying interlocking terror cells like the ones that struck Brussels and Paris with orders to choose the time, place and method for maximum carnage.

Belgium has provided more foreign fighters to Iraq and Syria, per capita, than any other European nation, and authorities estimate that at least 130 of these battle-trained extremists have returned home.

Belgian authorities have admitted to serious mistakes after the attacks, but they claim they are making progress and have inflicted damage against the terrorist network suspected of carrying out both the Brussels and Paris attacks.

However, CBS News correspondent Allen Pizzey reported that exactly how much damage European law enforcement agencies have inflicted on that European network of apparent ISIS operatives remains an open -- and vexing -- question.

One official conceded Brussels will never return to the so-called "normal" again.

As for Bakraoui, what he did while in Turkey and what he would go on to do in Brussels would remain a mystery to Belgian authorities for quite some time.

He disappeared off their radar last May and only popped back up on June 26, when Turkey notified Belgium that he had been picked up two weeks earlier near the Syrian border. More than two weeks would go by without a Belgian response.

Then, on the morning of July 14, Turkey's foreign ministry sent an advisory to Belgian and Dutch authorities that Bakraoui was booked on a 10:40 a.m. Pegasus Airlines flight in Istanbul, bound for Amsterdam.

The Dutch justice ministry said the deportation warning was sent to a Turkish-language electronic drop box that is normally checked twice a day. The message was prioritized as urgent, but the subject line read simply "Itinerary." It gave no reason for Bakraoui's expulsion.

A separate communique was sent to a Belgian police liaison officer in Turkey. When he requested details of the allegations against Bakraoui, he was told to make a written request, which he did the following day. A reply arrived on July 20, according to Jambon's testimony, almost a week after Bakraoui walked out of Amsterdam's Schiphol airport.

Turkish officials, including Erdogan, maintain they did their job by warning Belgium that Bakraoui could be a "foreign terrorist fighter." The Belgian government says the warning failed to include that crucial detail.

"Turkey only explained to us in January 2016 exactly why this man was stopped," Belgian Justice Minister Koen Geens told lawmakers, though he conceded "we should have guessed, based on the place he had been to."

For their part, the Dutch said the Bakraoui case was not handled according to the usual protocol. There was no direct exchange between police in the two countries, or any indication of terror links in the notification.

In five other cases with Dutch nationals -- all but one involving suspected travel to Syria -- Turkish authorities followed up the electronic notification by contacting Dutch police. The foreign ministry said Bakraoui's case seemed to be the only slip-up of its kind.

Still, a history of violent crime and a probation violation, as was the case for Bakraoui, would not necessarily raise alarms, the ministry said. Certainly he was not flagged in either the Interpol or European databases.

"It is clear the procedure is vulnerable," the Dutch justice ministry said.

Security officials say sometimes their hands are tied. It's hard to prove whether suspects have even set foot in Syria, where swathes of the country are virtually lawless, let alone establish if they have committed any crimes there.

Without proof, "we can go to the airport and say, 'We have reason to believe you have been to Syria. Would you like to talk about that?' And if he says, 'No, I've been visiting friends in Turkey,' we have to let him go," a European security official said, speaking on condition of anonymity due to the sensitivity of the issue.

Deportation is not just a one-way street. More than 82,000 people were expelled from EU countries in 2012, mostly migrants, and the procedures involved were similar to those followed in Turkey, according to aviation officials.

Indeed what's most surprising is that little of this is out of the ordinary.

There are no enforceable international laws governing deportations, only guidelines and standards. Intelligence sharing is virtually non-existent. European Union agencies are reluctant to share information among themselves let alone with an outsider like Turkey, even if it is a candidate to join the 28-nation bloc.

And when no crime has been committed on Turkish soil, let alone a trial held, all must respect the right to the presumption of innocence and confidentiality.

Airlines are not informed of the reasons for any deportation, whether from Turkey or continental Europe. A risk assessment of the danger a passenger might pose is supposed to be made available to carriers 24 hours in advance, but it's unclear whether this happens routinely or in time.

"Authorities can book tickets on an airline and as far as I know most airlines accept expulsions," said Association of European Airlines spokesman Geert Sciot. "Commercial airlines do not get information about the reason or justification of expulsion because that is part of privacy and security."

In Europe, police are tasked with getting a deportee to the aircraft door but they are routinely following orders from immigration officials.

"We just do what we're told," one European police official said, speaking on condition of anonymity because she was not authorized to speak publicly about the procedure.

Under the Convention on International Civil Aviation -- the non-binding charter for the industry -- signatory countries should first aim to take people back to their point of departure. Option B is the person's country of residence or nationality.

This could explain why Bakraoui was returned to Amsterdam rather than Brussels, where his arrival might have been flagged.

At European Union headquarters in Brussels, meanwhile, new measures to tackle the issue of returning foreign fighters are near completion. These include the IDs of returning EU citizens to be cross checked with police databases and a Passenger Name Record system giving authorities access to travelers' personal information.

It's an open question, though, as to how effective they will be when solid information already in the hands of officials now is not put to good use.

"When Turkey gives us the identity of a jihadi, there's no need for any system. We have the information, but we are not doing anything with it," Belgian leftist opposition lawmaker Marco Van Hees told government ministers.