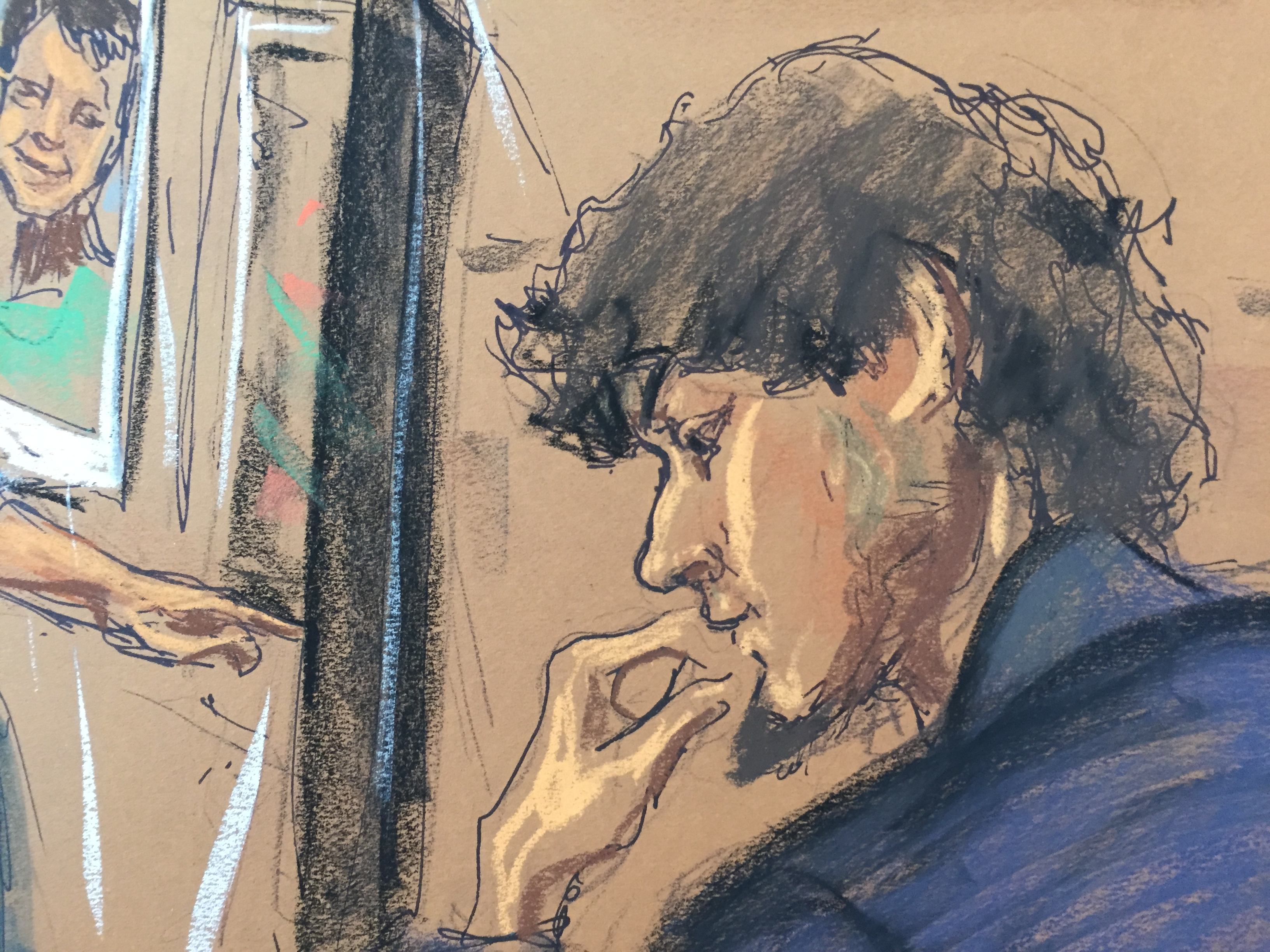 BOSTON -- First, the jury was shown large, vibrant pictures of the four people killed in the Boston Marathon bombing and its aftermath. Then prosecutors pulled out the photo they saved for last: Dzhokhar Tsarnaev giving the finger to the security camera in his jail cell.

"This is Dzhokhar Tsarnaev - unconcerned, unrepentant and unchanged," federal prosecutor Nadine Pellegrini told the jury that will decide whether the 21-year-old former college student should be executed.

The life-or-death phase in the Boston Marathon bomber's trial opened in powerful fashion Tuesday, with prosecutors portraying Tsarnaev as a coldblooded killer and "America's worst nightmare."

The government then began trying to drive home the horror of the attack in heartbreaking detail by calling to the stand what is expected to be a long line of witnesses who lost legs or loved ones in the April 15, 2013, bombing.

"I remember hearing just bloodcurdling screams. I just remember looking around, just seeing blood everywhere, sort of like debris falling from the sky," said Celeste Corcoran, who made her way to the witness stand on two artificial limbs.

She told the jury that the blast hurled her into the air and left her in such excruciating pain that she wanted to die.

William Campbell III, whose 29-year-old sister, Krystle Campbell, died in the bombing, testified that because of a case of mistaken identity, a nurse initially told the family that the young woman was in surgery and would survive. Hours later, they learned from a homicide detective that Krystle had died almost instantly.

"It wasn't real at first. ... This can't be true, this isn't real," her brother said. "I just eventually had to accept the facts." He added: "It's still tough. Every day, we still think about her."

Slouching in his seat at the defense table as usual, Tsarnaev stared straight ahead and showed no reaction during the proceedings. He did not appear to look at any of the witnesses.

Three people were killed and more than 260 wounded in the bombing, carried out by Tsarnaev and his older brother, Tamerlan, to punish the U.S. for its wars in Muslim lands. An MIT police officer was shot to death days later as the brothers tried to get away.

Tsarnaev was convicted earlier this month of all 30 charges against him during the trial's guilt-or-innocence phase. His lawyers did not give an opening statement Tuesday but will do so once the prosecution has made its case.

The 12-member jury must be unanimous for Tsarnaev to receive a death sentence; otherwise, he will automatically get life behind bars.

Prosecutors have argued that Tsarnaev was a full partner with his brother and deserves the ultimate punishment.

"His destiny was determined by him, and he was destined and determined to be America's worst nightmare," Pellegrini said. She described the killings as "unbearable, indescribable, inexcusable and senseless."

With enlarged photographs of the victims behind her in the courtroom, the prosecutor told the jury: "They were all beautiful, and they're all now gone."

In a dramatic finish to her opening statement, Pellegrini placed between the victims' photographs the picture of Tsarnaev extending his middle finger. The security-camera image was taken three months after Tsarnaev's arrest.

"He had one more message to send," the prosecutor said.

The photo was not immediately released to the media because the prosecution has yet to authenticate it in court and enter it into evidence.

About a dozen people protesting against the death penalty demonstrated outside the federal courthouse Tuesday morning.

A recent poll showed a majority of Bostonians are against Tsarnaev paying with his life.

In a Boston Globe essay, Martin Richard's family urged prosecutors to take the death penalty off the table, saying, "We know that the government has its reasons for seeking the death penalty, but the continued pursuit of that punishment could bring years of appeals and prolong reliving the most painful day of our lives."

Jessica Kensky and Patrick Downes, who each lost limbs in the attack, joined the Richards' plea Sunday, saying, "We must overcome the impulse for vengeance."

"There are certainly times where we feel angry or we have frustration and we have vengeance on our minds, but I don't feel like that's a great use of our energy," Downes said.