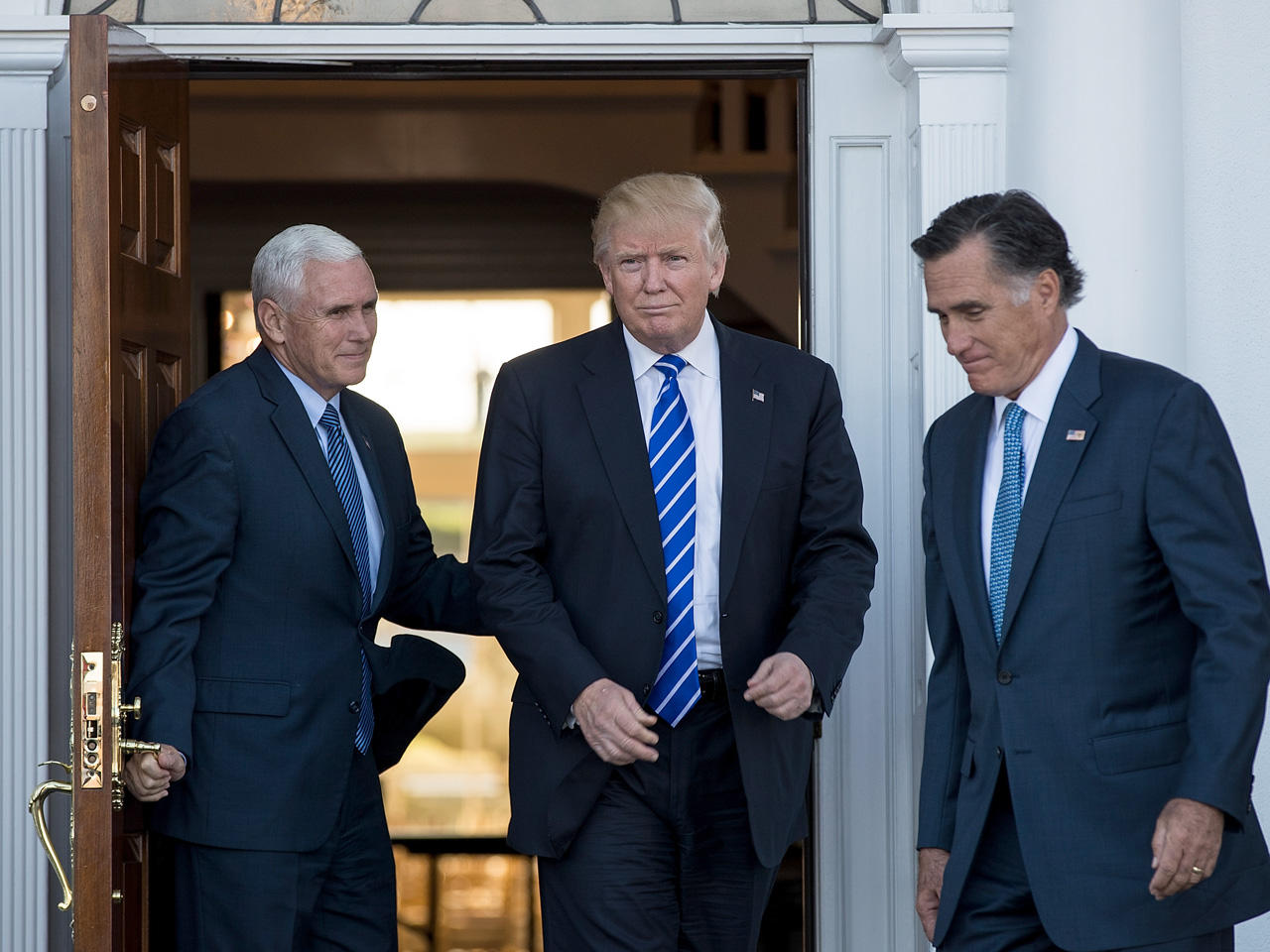 Traditionally, politicians and officials hoping for a Cabinet job -- or advisers advocating for or against someone vying for a role in the administration -- tend to do their lobbying for these things in private, eschewing media interviews while under consideration.

That’s still the case for many of the positions Mr. Trump is looking to fill in his administration, but the internal divisions over the secretary of state post, one of the top prizes in a new administration, have spilled out onto the airwaves and social media.

The battle centers largely around 2012 GOP nominee Mitt Romney, one of the apparent contenders for the job. Though he initially seemed like a long shot, sources told CBS News that Romney impressed Mr. Trump at their meeting earlier this month. Vice President-elect Mike Pence told CBS’ “Face the Nation” last week that Romney is under “active and serious consideration” for the post.

The Romney buzz followed just days after the top prospect for the job was thought to be former New York City Mayor Rudy Giuliani, a top supporter and surrogate of Mr. Trump’s during the campaign. Others whose names are in the mix for secretary of state are Sen. Bob Corker (R-Tennessee), former CIA Director David Petraeus and Marine Gen. John Kelly (ret).

In recent days, the knives have come out for Romney from certain parts of Mr. Trump’s camp -- with top adviser Kellyanne Conway delivering the harshest and most consistent criticism. She stepped up those attacks on Sunday with a series of tweets and TV appearances.

On ABC’s “This Week,” Conway denied that she was “campaigning against anyone” for the job: “I’m just a concerned citizen,” she said. But she then said Trump supporters “feel betrayed” by the idea that Romney, a fierce critic of Mr. Trump’s throughout the campaign, could be rewarded for his lack of loyalty by winning a top Cabinet post.

“I am just astonished at the breathtaking volume and intensity of blow-back that I see, just as one person close to the president-elect is receiving unsolicited from people on social media, particularly in private communications,” she said. “People feel betrayed … that you can get a Romney back in there after everything he did.”

“We don’t even know if he voted for Donald Trump,” she continued. “He and his consultants were nothing but awful to Donald Trump for a year.”

Conway went further on CNN’s “State of the Union” Sunday, questioning not just Romney’s loyalty to Mr. Trump but his qualifications for the job as well.

“I mean has he been around the globe doing something on behalf of the United States, of which we’re unaware?” she said. “With -- did he go and intervene in Syria, where they’re having a massive humanitarian crisis, meaning, when I say intervene, like offer to help? Has he been helpful to Mr. Netanyahu?”

“Receiving deluge of social media & private comms re: Romney,” she tweeted at the time, linking to a Politico story titled “Some Trump loyalists warn against Romney as secretary of state.”

Giuliani, meanwhile, the former New York City mayor, has pitched his experience relating to the position in several news interviews in recent weeks.

“I probably have traveled in the last 13 years as much as Hillary did in the years she was secretary of state,” Giuliani told the Wall Street Journal, in a reference to former Secretary of State Hillary Clinton. “My knowledge of foreign policy is as good, or better, than anybody they’re talking to.”

He continued by estimating that he has made more than 150 foreign trips since he left the mayor’s office in New York: “I’ve been to England eight times, Japan six times, France five times. China three times—once with Bill Clinton, by the way,” he said. “You can’t say I don’t know the world.”

Romney, meanwhile, has not spoken publicly about the position or speculation since his meeting with Mr. Trump.

Conway isn’t the only one on Trump’s team who has been critical of Romney as a possible State contender. Former House Speaker Newt Gingrich, an adviser to the Trump transition team who ran against Romney in the 2012 GOP primary, said Romney is not as “naturally compatible” with Mr. Trump’s vision as other contenders.

“Trump’s got to have somebody at state who’s very tough and very willing to take on foreign leaders,” Gingrich said on Fox News last Tuesday. “I can think of 20 other people who would be more naturally compatible with the Trump vision of foreign policy.”

Like Conway, he nodded to how a Romney pick would go over with Mr. Trump’s base of supporters.

I think there is nothing Mitt Romney can say that doesn’t sound phony and frankly pathetic ... he did all he could to help Trump lose Utah, he called Trump vicious and vile things,” Gingrich said on Fox on Sunday. “I think speaking for most of the Trump supporters, while we will support President-elect Trump in whatever he does, I think we would be enormously disappointed if he brought Mitt Romney into any position of authority.”

Mike Huckabee, another Trump loyalist whose name has been mentioned for potential roles in the Trump administration, said Romney’s “personal” attacks on Mr. Trump make him a bad contender.

“It’s not about that I don’t care for Mitt personally. But I’m still very unhappy that Mitt did everything he could to derail Donald Trump,” he said Wednesday. “He didn’t just go after him from the standpoint of ‘I disagree with his policy on immigration, I disagree with his policy on taxes.’ He attacked him on a personal level about his character, integrity, his honor.’”