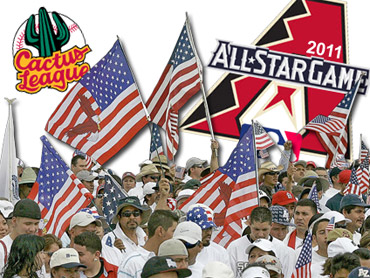 Major League Baseball has a strong presence in Arizona and a high number of Latino players, making it a prime target for opponents of Arizona's new immigration law who hope to persuade the state to change its divisive law through economic boycotts. Activists and sports columnists across the country are calling on baseball fans to ask the MLB to pull the 2011 All-Star Game out of Phoenix and to relocate the spring training Cactus League.

Protesters are also already picketing Arizona Diamondbacks games. A small group gathered outside of Coors Field in Denver yesterday, the Denver Post reports, to protest the law as Phoenix's team took on the Colorado Rockies. About 40 protesters chanting "Boycott Arizona" and "Reform Not Racism" gathered outside of Wrigley Field Thursday as the Diamondbacks played the Chicago Cubs. They vowed to be back at the stadium for the next three days.

The controversial law, signed by Arizona's governor on Friday, would require immigrants to carry documents verifying their immigration status. It would also require police officers to question a person about his or her immigration status if there is "reasonable suspicion" that person may be illegally in the country.

Arizona Rep. Raul Grijalva (D), among others, has called for a boycott of all things Arizona in order to fight the law. Many are making the case that a MLB boycott could have the biggest impact.

"Fifteen Major League Baseball teams now make Arizona's Cactus League the annual home of their Spring training, setting up MLB as the national organization that in both visibility and economic impact, could perhaps play the biggest role in pressuring the state to repeal," writes Seattle blogger David Goldstein.

Furthmore, Goldstein points out, 27 percent of Major League Baseball players are Latino, and 28 percent of the players are foreign born. The league also makes concerted efforts to reach out to Hispanic fans.

"So why should MLB and its teams continue to shower such immense economic largesse on a state that just passed laws intended to harass nearly a third of its players and the fastest growing segment of its fan base?" Goldstein writes.

"My Washington Nationals schedule shows the Diamondbacks come to town Aug. 13 for a three-game series," McCartney writes. "I expect I'll have something else to do that weekend."

Similarly, sportswriter Dave Zirin writes, "When [the Diamondbacks] arrive in my hometown in D.C., my back will be turned, and my television will be off. This is not merely because they happen to be the team from Arizona. The D-backs organization is a primary funder of the state Republican Party, which has been driving the measure through the legislature."

Zirin reports that Diamondbacks Managing Partner Ken Kendrick and two of his family members have made contributions to the Republican party totaling more than $1 million. The Arizona law was driven by Republicans in the state.

"If the owners of the Diamondbacks want to underwrite an ugly edge of bigotry, we should raise our collective sporting fists against them," Zirin writes.

A spokesperson for the team said Wednesday that Kendrick actually opposes the new immigration law, the Phoenix Business Journal reports. However, the team itself is politically neutral.

"The D-backs have never supported State Bill 1070 and have never taken political stances," a statement from the team said, the Business Journal reports. "The D-backs represent all of our employees, players, owners and fans who all have different political affiliations. It would be unfair and unjust for the D-backs to take a position because it can't be reflective upon everybody's views."

Mike Freeman, a national sports columnist at CBSSports.com, writes that it is in the sport's best interest, and perhaps morally imperative, for the All-Star Game to pull out of Arizona.

"The weighty power of sports leagues has always been utilized to help enact social change, going back to Jackie Robinson and beyond," Freeman writes.

Activists and columnists all point to the precedent set by the National Football League, which moved the 1993 Super Bowl from Phoenix to Pasadena, Calif., when Arizona refused to recognize Martin Luther King Jr. Day.

Pulling the All-Star Game out of Arizona could cost the state millions. By comparison, the St. Louis Regional Chamber of Commerce and Growth Association estimated, before the game, that the 2009 All-Star Game would bring in an extra $60 million in business to St. Louis, the Atlantic reports.