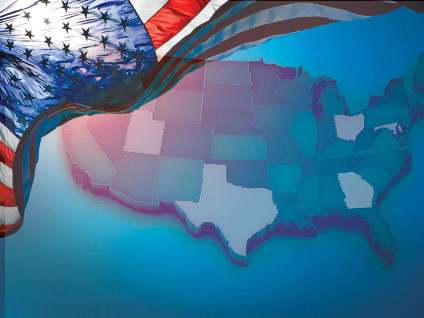 Politicians in at least five states are calling for their state legislatures to adopt immigration laws that mirror Arizona's controversial new measure.

State lawmakers and others in Texas, Utah, Georgia, Ohio and Maryland are seizing on Arizona's hard-line approach to illegal immigration, which has the approval of many conservatives who say it is necessary in the absence of adequate federal policies. The law, however, has outraged others across the country who say it violates Americans' Constitutional rights and/or encroaches on federal authority to regulate immigration.

Arizona's new law, signed by the governor on Friday, would require immigrants to carry documents verifying their immigration status. It would also require police officers to question a person about his or her immigration status if there is "reasonable suspicion" that person may be illegally in the country.

Both those in favor of and those opposed to the Arizona law say that Washington's lack of action on the issue of immigration prompted the Arizona legislature to act.

Immigration reform "has to be a priority" in Washington, White House Press Secretary Robert Gibbs said Tuesday. The Arizona law, he added, "could naturally drive each state to creating its own immigration law."

"I agree with the Arizona governor and Legislature that the federal government has failed miserably at protecting our borders and enacting sensible solutions that would protect our states, counties and cities from bearing the enormous costs associated with illegal immigration," Deal said in a statement yesterday. "As governor of Georgia, I'd work to pass and sign similar legislation."

Deal formerly served in the House of Representatives but resigned in March this year after the health care debate. He authored an amendment to the health care bill restricting access to health insurance for illegal immigrants. As a congressman, he also authored legislation that would end birthright citizenship to babies born in the United States to parents in the country illegally.

In Texas, both conservative Republican Gov. Rick Perry and his Democratic challenger Bill White are hesitant to take up the issue, which is not surprising given the significant role Latino voters will play in this year's gubernatorial race.

Nevertheless, one Republican state lawmaker is pushing for Texas to adopt legislation like Arizona's, the Houston Chronicle reports. State Rep. Debbie Riddle has introduced similar legislation in the past and will reportedly do so again when the legislature meets in its next regular session in January.

"The first priority for any elected official is to make sure that the safety and security of Texans is well-established," she said. "If our federal government did their job, then Arizona wouldn't have to take this action, and neither would Texas."

"I'm real proud of Arizona," Swinford said. "A lot of this stuff we wanted to do, we just couldn't do, because I didn't want Texas going bankrupt trying to defend it in the courts... Arizona can take it to the courts."

The letter asked Strickland "to employ your leadership role as Governor to assure legislation is passed that will mirror that of the illegal immigration legislation" in Arizona and to press for the passage of other immigration-related bills. According to the paper, the letter was sent the same day Jones was preparing to lay off 10 members of his staff. While a law like Arizona's would place more responsibility on local law enforcement, Jones stood by his position. "The only alternative you have is that you don't do anything. This is a violation of the law," he said.

"When Arizona, in the past, has cracked down on illegal immigration, Utah has been the destination of choice for illegal aliens that leave the state of Arizona," Sandstrom said, KSL-TV reports. Sandstrom said he is drafting legislation similar to Arizona's to introduce in the next legislative session.

State Delegate Pat McDonough, a Republican from Maryland, wants his state to pass a version of Arizona's law for the same reason, ABC2 News in Baltimore reports.

"When people come across that border, they're not going to go to Arizona anymore. They're coming here," McDonough said.

McDonough reportedly plans to send a survey to every candidate for the state's General Assembly, along with the candidates for governor, asking them whether they agree with Arizona's approach.

"We'll go on the record and this summer we're going to pretty much know who is in favor of the Arizona bill and who is not," he said.