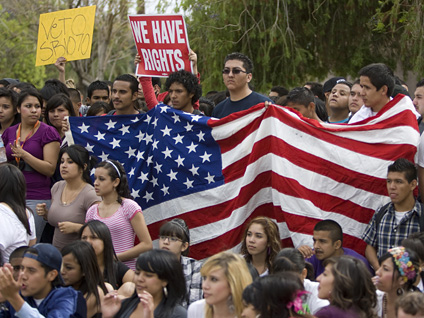 Arizona Gov. Jan Brewer on Friday signed into law a divisive measure intended to curb illegal immigration, but the fight over the legislation is far from over.

Thousands of demonstrators gathered in Phoenix Sunday to protest the law (the Support Our Law Enforcement and Safe Neighborhoods Act, or SB1070), which compels police officers to question a person about his or her immigration status if there is "reasonable suspicion" that person may be illegally in the country. It would also make it a crime under state law to be there illegally.

Phoenix Mayor Phil Gordon told demonstrators the law is "tearing us apart," USA Today reports. He plans to ask for the city council's approval on Tuesday to file a lawsuit to block the measure.

"We're looking at going to Federal and state court and asking for an injunction," Gordon said, Time magazine reports, "saying that it's unconstitutional, because of the civil rights being violated and the vagueness of the statute."

Along with Gordon, two of Arizona's Democratic representatives in Congress, Reps. Raul Grijalva and Ed Pastor, spoke out against the law at Sunday's rally. Maricopa County Supervisor Mary Rose Wilcox joined them, the Arizona Republic reports, as did Rep. Luis Gutierrez (D-Ill.), who flew to Phoenix for the rally.

Grijalva is calling for a multi-pronged approach to fighting the law. He has appealed to President Obama to "challenge, in any way possible, this un-constitutional and discriminatory law." He asked the president to keep the federal government from cooperating with the state's enforcement of the law.

Mr. Obama has called the law "misguided" and instructed the Justice Department to examine the law's implications.

Grijalva is also calling for a boycott of his state's goods, services and tourism. About 70 drivers from California and Arizona have already agreed to stop moving loads into or out of Arizona in protest of the new law, according to the Arizona Republic. In his call for the boycott, Grijalva cited an Arizona boycott in the 1990's that persuaded the state to recognize Martin Luther King Day.

In spite of the outcry over the bill, its supporters in government are maintaining their position and may even benefit from it, by some estimations.

"It's outrageous that these people continue to support law breakers over law keepers,'' state Sen. Russell Pearce, the Republican who sponsored the legislation, said Sunday, the AP reports.

The Wall Street Journal reports that Gov. Brewer, who will face off against Republican primary challengers this summer, could use her endorsement of the new law to secure her conservative credentials. She has recently angered Republicans by calling for a sales tax increase in the state.

Arizona Sen. John McCain, who faces his own tough Republican primary challenge this year, at the last minute expressed support for the new law and said that if Mr. Obama is not happy with it, he should send more National Guard troops and Border Patrol officers to the border.

Some commentators are criticizing the Republican party for supporting a law that alienates Hispanic voters.

On the other hand, Time magazine points out that the two largest Latino districts in Arizona have some of the lowest voter turnout rates in the country.

Yet even former Rep. Tom Tancredo, a Colorado Republican infamous for his incendiary remarks related to immigration, called the Arizona law an "extreme measure." According to a report from KDVR-TV, Tancredo said he would endorse similar legislation in Colorado, but he questioned the law's potential for racial profiling.

"I do not want people here, there in Arizona, pulled over because you look like should be pulled over," he said.

"That that type of law could naturally drive each state to creating its own immigration law," he said.

If Senate Democrats decide to take up immigration reform this year, however, they could be driven by politics as much as they are by a need to respond to Arizona's new law.