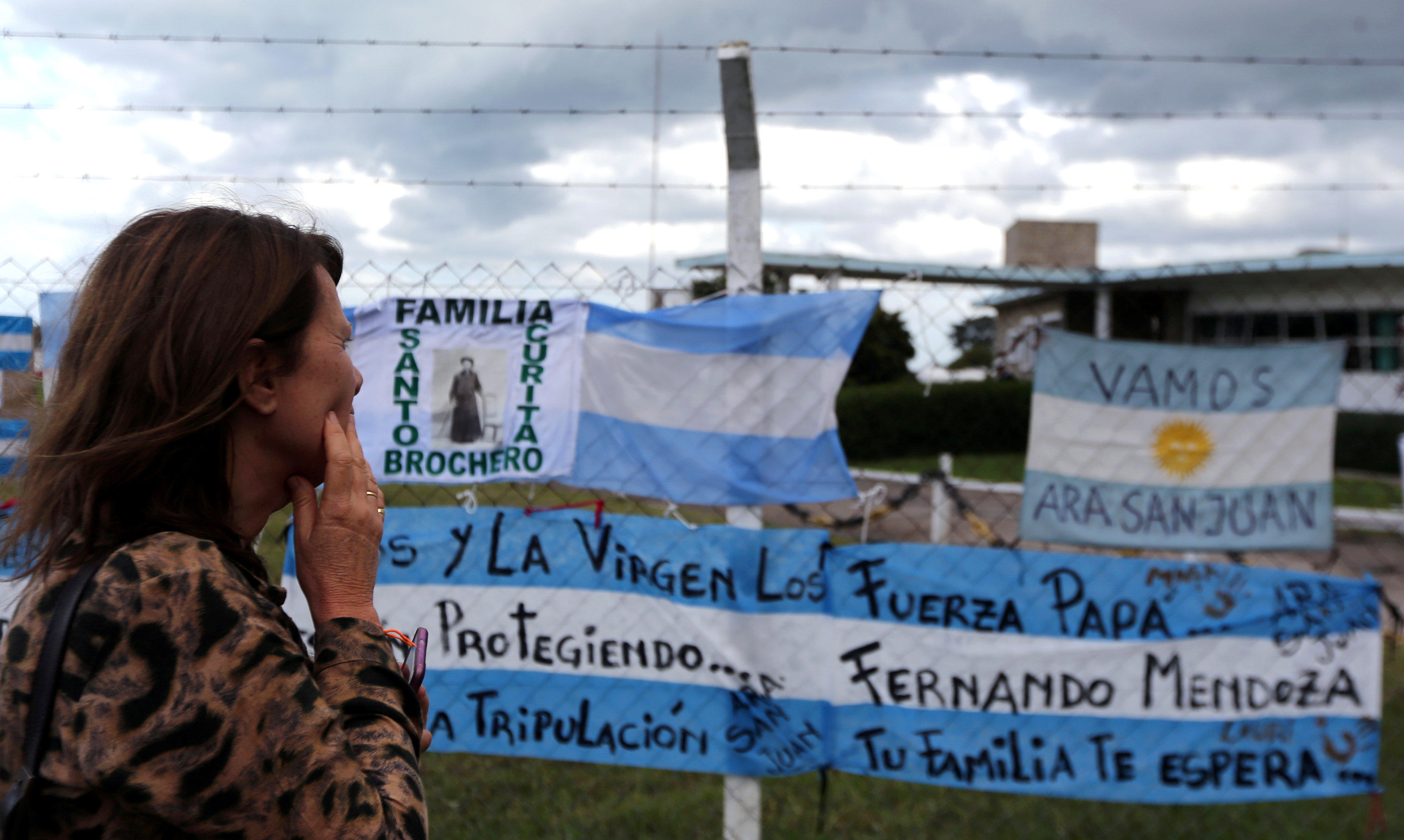 MAR DEL PLATA, Argentina -- Sounds detected by probes deep in the South Atlantic on Monday did not come from an Argentine submarine that has been lost for five days, the country's navy said Monday, dashing newfound hope among relatives of the 44 sailors aboard.

Navy spokesman Enrique Balbi told reporters that the "noise" was analyzed and experts determined it was likely "biological." He said the sounds did not come from tools being banged against the hull of a submarine as was previously reported by some media.

"We all had hope, but unfortunately this comes from believing sources that are not trustworthy," Balbi said. "Some sources were saying that this was banging on the hull in Morse code signals."

The noise was heard by two Argentine navy ships about 220 miles from the Argentine coast and at a depth of about 650 feet. A U.S. Navy P-8 Poseidon aircraft was sent to help in the effort to isolate the source of the sounds.

The ARA San Juan went missing Wednesday as it sailed from the extreme southern port of Ushuaia to the coastal city of Mar del Plata. More than a dozen international vessels and aircraft have joined the search, which has been hindered by stormy weather that has caused waves up to 20 feet.

In the first confirmation of a malfunction, an Argentine navy official said earlier Monday that the submarine reported a battery failure Wednesday and was returning to base when it went missing.

Brief satellite calls over the weekend had originally been thought to indicate the crew was trying to re-establish contact, prompting emotional celebrations by family members and officials. But Balbi said earlier Monday that officials analyzed the seven low-frequency satellite signals and determined they were not received from the submarine.

Although the German-built diesel-electric vessel carried enough food, oxygen and fuel for the crew to survive about 90 days on the sea's surface, the sub had only enough oxygen to last seven days submerged, Balbi said.

"You're trying to gather all the data, all the information you can as quickly as you can," said retired Navy Capt. Gregg Baumann, who was once the supervisor for the Navy's salvage and diving operations. "That ocean turns out to be a very large ocean if you're looking in the wrong box."

At the Vatican, Pope Francis, a native of Argentina, said he was sending "fervent prayers" for the crew.

The U.S. Navy ordered its Undersea Rescue Command based in San Diego, California, to deploy to Argentina to support the search for the submarine. The command includes a remotely operated vehicle and vessels capable of rescuing people from bottomed submarines.

Some relatives of the missing crew members took to social media Monday to ask for support during the search.

"Pray so that my husband, Fernando Santilli can return home," Jesica Gopar wrote. "He's in the San Juan submarine."

The submarine was originally scheduled to arrive Monday at the navy's base in Mar del Plata, which is about 250 miles southeast of Buenos Aires. Argentine President Mauricio Macri met with family members at the base as they waited anxiously for news about their loved ones.

"We can make up a thousand movies with happy and sad endings, but the reality is that the days pass by and not knowing anything kills you," Carlos Mendoza, the brother of submarine officer Fernando Ariel Mendoza, told the AP.

"Every minute is oxygen that's worth gold."