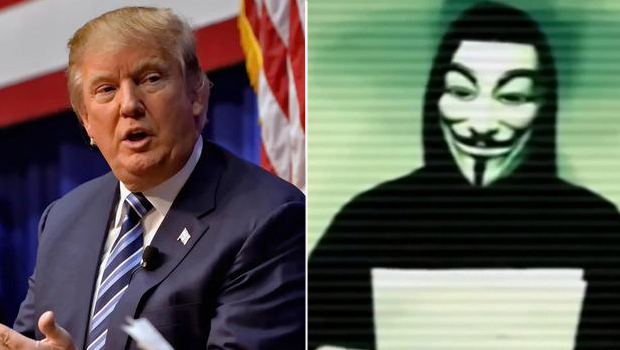 Hot on the heels of its campaign against ISIS, the shadowy hackers' collective known as Anonymous is going after a new target: Donald Trump.

The latest Anonymous operation -- #OpTrump -- was announced in a YouTube video featuring a masked activist claiming to speak for the group. In a computer-generated voice, he takes aim at Trump's proposed ban on Muslims entering the United States, claiming "This is what ISIS wants." He goes on to say that "the more the United States appears to be targeting Muslims, not just radical Muslims," the more ISIS will be able to recruit sympathizers.

The video concludes with Anonymous' now-familiar threat: "You have been warned, Mr. Donald Trump. We are Anonymous. We are Legion. We do not forgive. Expect us."

What impact the Anonymous hackers may have on Trump, his presidential campaign, or his business interests, however, remains to be seen. Reuters reported the website for Trump Tower New York suffered an outage on Friday, and a Twitter account associated with Anonymous claimed responsibility, but the site was back up and running again a short time later.

Gabriella Coleman, who studies hackers and online activism as the Wolfe Chair in Scientific and Technological Literacy at McGill University, in Montreal, told CBS News it's no surprise that Anonymous would find Trump a juicy target. "He's the biggest bully and the only other bully that's bigger is possibly trolls and Anonymous," she said.

"Anonymous isn't necessarily going to take down his campaign, per se," she said, but "they could embarrass him."

Possible actions could involve "hacking into his headquarters or releasing something that exposed some hypocrisy or wrongdoing of some kind. Or get him to comment on something. That is possible when you have a bunch of these groups working on this problem. It's always hard to know whether they will succeed or not," she said.

Anonymous declared war on ISIS last month following the deadly attacks in Paris. In what the hackers dubbed #OpParis, they claimed to have taken down thousands of ISIS-related social media accounts, aiming to hamper terrorist propaganda and recruitment efforts, though experts noted that new user accounts could replace them nearly as fast.